The second part of my walk on Saturday took me past iconic London views like Tower Bridge (above). To the right you can see the HMS Belfast, a Royal Navy cruiser that now operates as a museum. I've never been on it. I suppose I should do that one of these days -- maybe the next time Dave's dad visits. He's into boats and military stuff. 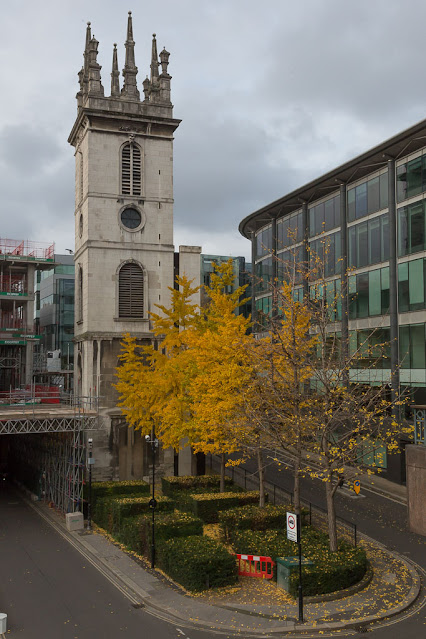 The ginkgo trees (at least I think that's what they are) near the tower of St. Mary Somerset Church had turned a brilliant yellow. This is a peculiar structure -- the church was rebuilt in the 1680s after the Great Fire of London, and used for about 200 years before the congregation shrank as people moved from inner London to the eastern suburbs. The body of the church was then demolished in 1871, but for some reason the tower was saved, and now stands all on its own. 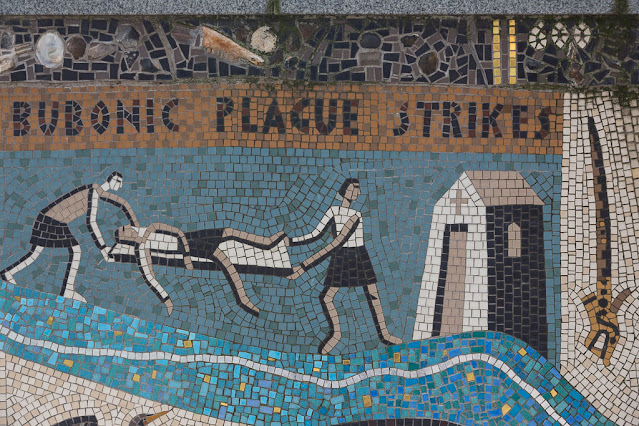 At Queenhithe, an ancient wharf area, a long (30 meters!) mosaic traces the timeline of human activity at that point. As you can see above, in 600 AD, the bubonic plague struck, and of course struck many times again over the centuries. For a closer look at the rest of the mosaic click here. I'd never heard of this treasure but it's a fascinating piece of work and I wish more visitors knew where to find it. 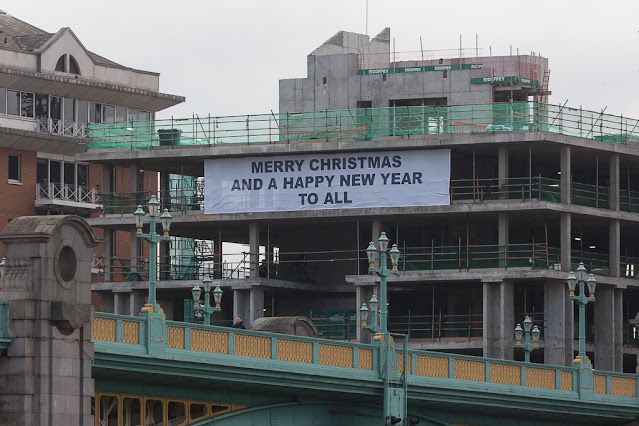 A construction site across the river was getting into the holiday spirit. 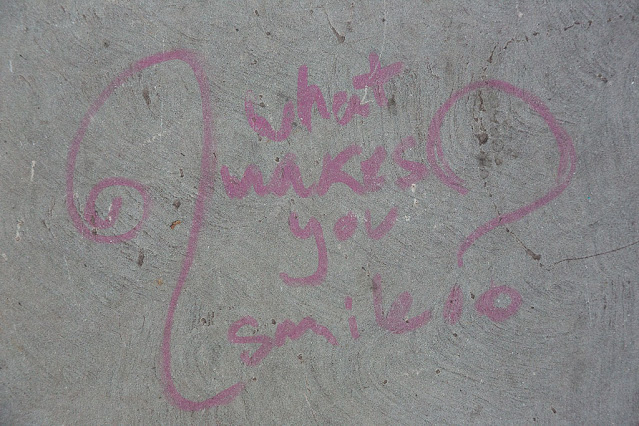 Some sidewalk graffiti to ponder! 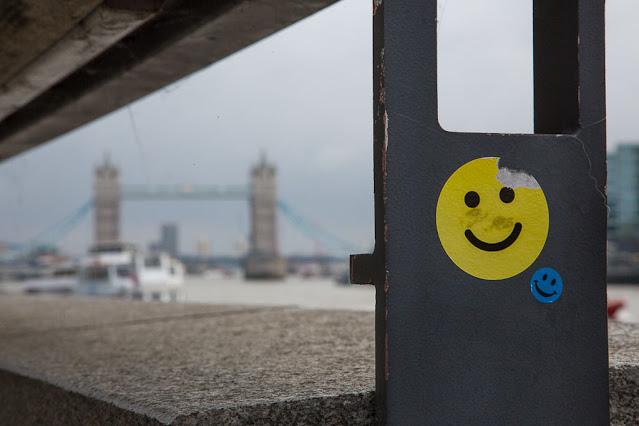 Silly stickers on the riverfront railing make me smile.

I navigated my way past the crowds at the Tower of London and Tower Bridge, and found myself in a confusing neighborhood of waterways and pedestrian bridges called St. Katharine Docks. As much as I've walked around London I don't think I've ever been in this area before. There are several boat basins filled with fancy watercraft and surrounded by apartments and this pub, The Dickens Inn. (Where, thank God, there was an accessible loo.) 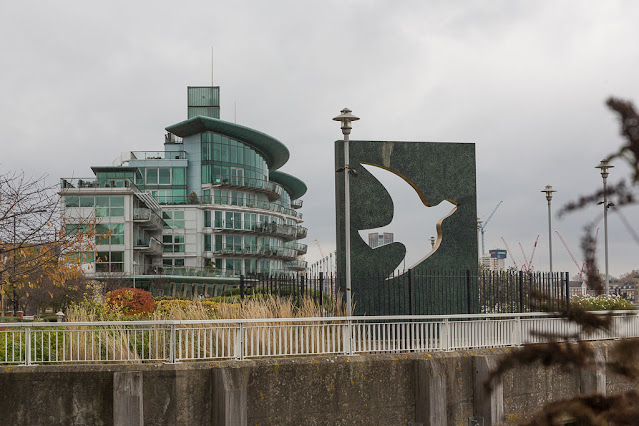 After wandering around St. Katharine Docks for a while, trying to figure out how to get out of there, I found my way to Wapping High Street, where the Blitz Memorial (above) by artist Wendy Taylor commemorates the people of East London who were killed in the Blitz in World War II. It stands in a small park called the Hermitage Riverside Memorial Garden, overlooked by some ultra-mod new flats.

From there I walked past lots of old warehouses repurposed into flats and offices until I got to the Wapping overground station, and took the train back to West Hampstead.
Posted by Steve Reed at 7:10 AM

Another exceptional walk. I’d love to spend a month (or even a week) doing some of these walks you’ve shared. Thanks for the link to the mosaic. Incredible. I could spend hours there. Victoria’s likeness is astounding.

The Queenhithe Mosaic is fabulous. I had never heard of it before. So much patience and so many small tiles. It was created between 2011 and 2014 and three hundred mosaic artists were involved in its creation.Shirley and I visited St Katharine's Docks just this past summer with Ian and Sarah.

Wonderful. You give me a sense of London that I've never had before.

Those mosaics are amazing and yes, more people should know about them. Thank you for taking us on these walks.

That must be a full time job to keep that mosaic looking so good. What an amazing work of art! I love how your walks are taking us to every interesting thing in London! Thanks, Steve.

Such a great walk, Steve. I love seeing London through your eyes. Thank you for this.

This is a very interesting portion of your walk. Especially that mosaic. I put it on my list of things to see the next time I got to London.

Sometimes it's nice to just wonder around nd bump into things that surprise you. I enjoy your walks.

Another great walk, and discoveries. There's no end to it!

That mosaic is amazing! What a lot of work went into it! And as one might expect, your photo of that section is better than the one on the website you pointed us to.

I've been on enough naval tours to know that the navy or spending long times on a military sea going vessel aren't going to be in my future cards. They are not friendly to the follicly challenged and even worse for those who are tall, as there were tons of places to wang my head against everywhere. Even the passageways are so narrow that I always felt like a bull in a china shop. Finally, I grew up on a farm with a clear directional system built in. But in the depths of a ship with no windows, it is useless. I once got lost on a self guided tour of an aircraft carrier and after a half hour, stumbled into a galley that I had been to previously so I could resume my tour and see where I had gotten off.

Thanks for showing us this part of London. We missed a lot when we were there, mainly because it was so cold, we tubed everywhere.

Thats an amazing mosaic. I wonder how old it is, just read Mr. Pudding's comment.

The dock areas can be quite fascinating with their mixture of history and towering buildings, along with lower modern buildings. It is good that the Tower Bridge area is once against thriving with tourists.

I'm glad you discovered that mosaic so you could share it with us. I'd love to see it in person!

Gingkos in the fall are one of my favorite trees. Their bright yellow leaves are stunning! (and drop in the blink of an eye!)

Lovely tour. I love the old tower all alone among the modern structures, as well as the Blitz Memorial; that's a lovely, peace-filled reminder.

I find that mosaic quite beautiful. That's quite a hike -- love the distance of the bridge and those buoys in the foreground.

You were very close to the Golden Hinde, the Globe Theater and Southwark Cathedral. You could have gone to the cathedral to make the acquaintance of Hodge the cathedral cat.

Another interesting walk. There is a lot of history in the full mosaic. Such a pity other countries don't do similar showings.

Mitchell: I agree! I thought the portraits were the highlight of the mosaic. (Despite the fact that I didn't blog them.)

YP: You'll have to check out the mosaic the next time you're there! I don't know how I've never visited the St Katharine Docks before.

Ms Moon: A lot of effort obviously went into them, not only in the construction but also the design.

Ellen D: I'm sure it must take some effort to keep it clean and in good repair.

Robin: Glad you're enjoying it!

Sharon: Yes, it's worth it!

Red: One of the great things about London -- there's a surprise around every corner.

Boud: Indeed there's not, for better or worse. :)

Bug: The web site is better at showing the whole thing in its entirety. Are you near the area in NC that's been knocked out by the power cuts?

Ed: Well the Belfast is smaller than an aircraft carrier so it might be harder to get lost, but I'm sure there are plenty of low ceilings!

Allison: Well, that's a good way to see London, too. You can get to lots more far-flung places!

Pixie: Not that old. The link tells more about it. Looks like it was completed in 2014.

Andrew: Oh, that area is crazy with tourists. I didn't even try to take pictures because I've been to the Tower of London and shot that area so many times.

Kelly: I agree -- I used to love the bright ginkgos in New York!

Bob: The Blitz memorial frames the Shard from the other side.

Debby: Yes! I'll see all that when I come back along the south shore of the Thames. I think I've photographed that cat, or perhaps one of his predecessors!

River: It's a remarkable piece. I suppose other cities' might be shorter, or perhaps just less condensed! (My hometown of Tampa, for example, is only a couple hundred years old.)

That's a fabulous mosaic, not only the history but the fish and fowl and goods.

So they left the tower. Is it used for anything or just deserted?

No the power outages are down east from us. That's just a total crazypants story - if it's true that it was vandalism to shut down a drag show then what the actual F%*#!

So many interesting sights and you captured them extremely well.