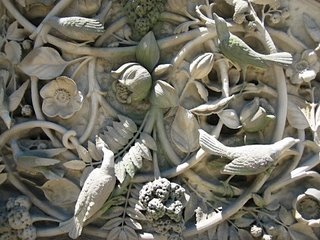 One of my favorite spots in Central Park is Bethesda Terrace, which overlooks The Lake and includes the Bethesda Fountain (of "Angels in America" fame). The limestone decorations along the steps leading down to the fountain have to be seen to be believed. The deep, ornate carvings include entire birds and flowers and date from the 1870s.

My AIA Guide to New York City says the stonework at Bethesda Terrace was the work of Jacob Wrey Mould, though Calvert Vaux came up with the concepts. 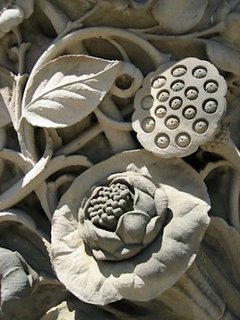 I was happy to find a lotus blossom among the carvings! The lotus often appears in Buddhist writings and texts as a symbol of purity amid the world's delusions. I attend a weekly Zen service where one of the lines reads, "May we exist in muddy water with purity like the lotus."

In a way, I suppose that's what Jacob Wrey Mould and Calvert Vaux were trying to tell us, by leaving us with such exquisite carvings.
Posted by Steve Reed at 12:17 PM