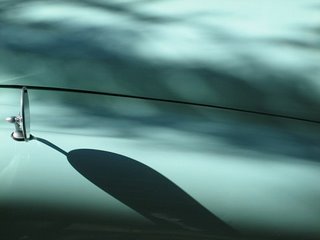 I'm not much of a "car person." I often don't notice them at all, and I'm hopeless at identifying them. (Unlike my brother, who even as a child could identify a car in the dark by its oncoming headlights alone.)

But as I was walking on Second Avenue this weekend, this particular parked car caught my eye. That minty green was such an unusual color, and the light on its surface was interesting.

As I stopped to take some photos, a doorman came out of the building behind me. "Nice car, huh?" he said. I agreed it was.

No, I said, feeling like I was about to get in trouble for something.

"Geraldo Rivera's. He's in that restaurant right over there."

The doorman identified the car as a '55 Jaguar before going back inside.

I didn't wait around for Geraldo to materialize.

Every once in a while I see an actor or TV personality in New York - I saw Woody Allen and his wife Soon Yi in Central Park a couple of years ago, I saw Natasha Lyonne in a deli, and just last night I saw Kieran Culkin in Starbucks. But this was probably the first time I noticed a "celebrity car."
Posted by Steve Reed at 11:12 AM