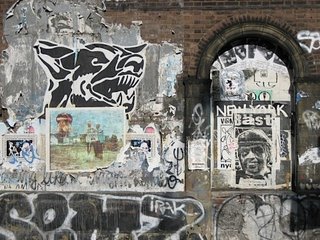 The New York Times on Sunday had an article about this building, a vacant hulk at the corner of Spring and Elizabeth streets. A magnet for street artists, it's been plastered with all manner of poster art and graffiti, and is apparently the subject of much speculation in the neighborhood. (Steven Kurutz, who wrote the article, called it "the New York equivalent of the spooky suburban home with the chipped paint and the weedy lawn.")

Turns out the building went up in 1888 as a carriage house and horse stable, and as a result had interior ramps instead of stairs. A theatrical set designer bought the building in the 1970s and kept lighted candles in the upper windows - just to freak people out, I suppose. In 2003, the building was sold to Lachlan Murdoch, son of Rupert, who planned to live there, but then returned to Australia instead.

It's been sold again, and will be turned into - of course - condos. The new owners say they are "sensitive to the street art issue," but who knows what that means.
Posted by Steve Reed at 10:23 AM