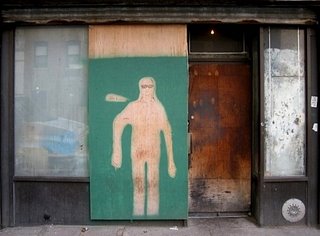 This ghostly figure, on a storefront near Ninth Avenue, is named Alex. You probably can't tell from this photo, but the person who named him also penciled in some glasses and haphazard clothing, including Jockey underwear.

I made a musical discovery this week. I haven't been a huge fan of Edie Brickell and New Bohemians, that late-80s band that had a hit or two back in the day. (Remember "What I Am"?) But in 1994, Edie came out with a solo album, "Picture Perfect Morning," produced by Roy Halee and her husband, Paul Simon. (It has great cover art.) I got it used on Amazon the other day for $1.89, and I'm happy to report that it's excellent. By '94, Edie had grown up a bit - as a more mature musician, she was no longer singing about smiles on dogs.
Posted by Steve Reed at 10:31 AM