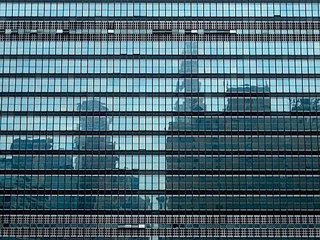 I have a real soft spot for the United Nations. In High School I was a participant in our Model UN club, in which students act as foreign delegates and debate international issues. (It's a very nerdy thing to do in high school.) As an adult I've always had a secret desire to work there. I see the UN much like the Eleanor Roosevelt types who created it - as our best forum for international dialogue.

Idealistic? Sure. It's actually a big, sprawling bureaucracy, hampered by the inefficiencies of government and the diverse expectations of its players. But it's also all we have, and it deserves our support. I'm disgusted by the United States' reluctance to pay our dues and participate with reason rather than aggression.

This photo shows the Midtown skyline reflected in the glass of the tall Secretariat building at UN headquarters on the East River. The buildings that house the UN were created in the late '40s and early '50s, a collaboration by an international committee of architects led by Wallace Harrison and including Le Corbusier, Oscar Niemeyer and Sven Markelius. They have a mid-century gracefulness, though they've become a bit worn. There's a move afoot now to expand the UN complex to the south and modernize the facilities, while preserving the historic architecture.
Posted by Steve Reed at 11:16 AM