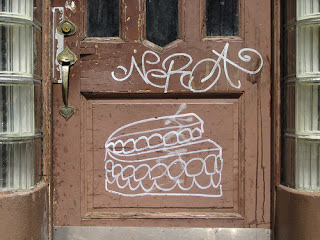 As expected, I had a great day yesterday - spectacular clear weather, perfect for wandering around and taking photos. I popped into a great little restaurant in the East Village for brunch (omelette with goat cheese, watercress and sweet peppers) and explored some areas near Avenue D that I don’t think I’ve ever visited before. That used to be a sketchy neighborhood, but like most of New York, it’s now pretty tame.

On the spur of the moment, I went to see “Xanadu” last night on Broadway. Yes, it really is an adaptation of Olivia Newton-John’s famously bad movie (which, come to think of it, I don’t think I’ve ever seen). The show is a hoot, basically because it laughs at itself the entire time, and never pretends to be anything more than silly. (One character described it as "a kids' play for 40-year-old gay people.") You haven’t lived until you’ve seen Medusa, with her head full of snakes, singing “Have You Never Been Mellow.” Surreal!
Posted by Steve Reed at 12:27 PM