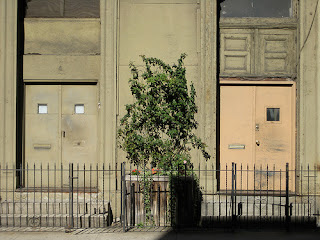 I saw Wes Anderson’s new movie, “The Darjeeling Limited,” on Saturday. It’s one of these movies where the characters have such interesting exchanges that I come away wanting to communicate better in my own life. Why do I leave so many things unsaid? Why don’t I open up more?

Don't get me wrong: The movie is not weepy. The main characters are three brothers, so their communication is more visceral. Sometimes they fight, or they're uninentionally funny, or they just give meaningful looks. Still, I envy them.

Of course, what I have to remember is that movies come from a SCREENPLAY, in which responses are scripted and considered and no one ever blurts out the first thing that comes to mind. In other words, all that frank and honest exchange isn’t really honest -- it just sounds like it.

I felt this way years ago after I saw “The Secret Lives of Dentists,” in which I admired the ability of the characters played by Hope Davis and Campbell Scott to argue and fight, openly working through conflicts that among my own family members would probably produce only cool, stubborn silence.

I guess all of this comes from my roots as a repressed WASP.

Anyway, “The Darjeeling Limited” is a fun movie -- terrific atmosphere and very quirky characters and plot. Beautiful photography. And it introduced me to an interesting folk singer named Peter Sarstedt, whose late-’60s song “Where Do You Go To My Lovely?” plays a prominent role.

(Photo: Doors between Lafayette Street and Broadway, NoHo, Sept. 2007)
Posted by Steve Reed at 9:56 AM