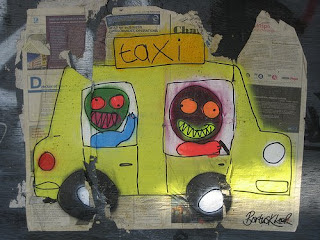 After the Zendo yesterday morning I went to watch the Pride Parade with my friend Bill. I’m ambivalent about the parade, with all its outrageous costumes, hypersexuality and glut of marchers. (It’s WAY too long.) But on the other hand, it’s fun to watch for a while, and it is an important expression of community.

So, anyway, we watched long enough to see Rue McClanahan stumping for Obama, and newlywed George Takei (Mr. Sulu from “Star Trek”) riding atop a convertible with his partner. Then the skies opened up and it poured rain -- complete with thunder and lightning reminiscent of Florida. I ducked into Banana Republic, but the storm passed quickly and the parade never really stopped, from what I could tell.