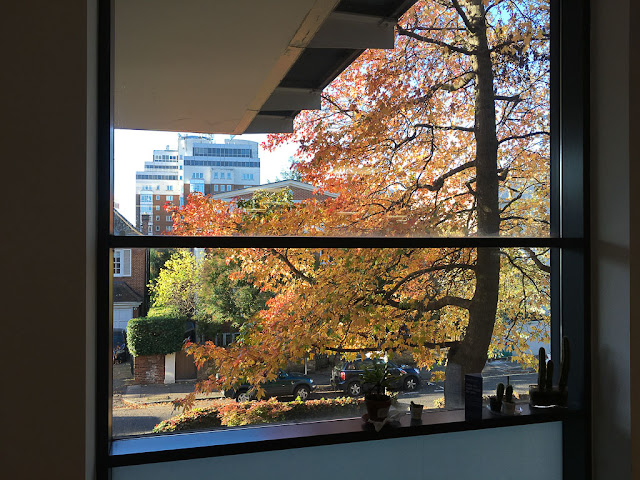 This is the view out the window of our staff lounge at work. When I went to get my morning coffee yesterday that beautiful tree caught my eye, with the sun brightening its colorful leaves. (And yes, the coffee machine was actually working! Whatever the "flow error" was, it has been corrected.)

Remember our missing and ridiculously expensive DVDs? Well, they arrived yesterday, and we were thrilled. This seems to be a replacement package -- my boss e-mailed the vendor on Nov. 11 when the first package failed to show up, and apparently they took it upon themselves to send another shipment that same day. Either that or they never sent them in the first place, and that whole goose chase was over a different box. (We did belatedly learn that apparently the package in the CCTV image from the loading bay was not our DVDs.) Anyway, long story short, they're here now and we didn't have to pay any more to get them, so it's a win for us.

I read an interesting article in the Nov. 8 issue of The New Yorker about a somewhat obscure Bennington College professor who compiled what may be the world's longest and most complete diary. Apparently he began writing in childhood and basically never stopped. He painstakingly saved everything, and although he is now dead, his papers have been acquired by the Getty Research Institute and are gradually being made public.

The professor, Claude Fredericks, knew famous people and traveled in intellectual circles, but according to the author of the article he could be a somewhat stultifying writer. Still, he strove to be open and honest, which he felt were essential qualities for a diarist, and I found the discussion about how and why people keep diaries pretty fascinating.

After all, being a blogger isn't all that different -- except that we're writing for an immediate audience, so there's a certain amount of self-editing going on. That editing raises its own questions. How truthful are we being? How completely are we presenting ourselves? Are we sacrificing accuracy for brevity? When keeping a truly private diary it's easier to be more honest -- although that isn't guaranteed either, because we deceive ourselves about our own behavior and motivations, and if we envision that our diary may eventually become public -- even years in the future -- we may be selective about what we say. But it's also easy to say too much, to be too verbose and revealing, because there really are no editing constraints. It sounds like Fredericks fell into those traps fairly frequently.

Anyway, as a lifelong journal-keeper, I find others' diaries endlessly interesting. (I have the second volume of David Sedaris's diaries sitting in my to-read pile as we speak.) For me, keeping a journal (or a blog) is a way to process and record the events of my life, however ridiculously trivial those events may seem, and I enjoy employing the (modest!) skills required to produce and edit fresh content every day. 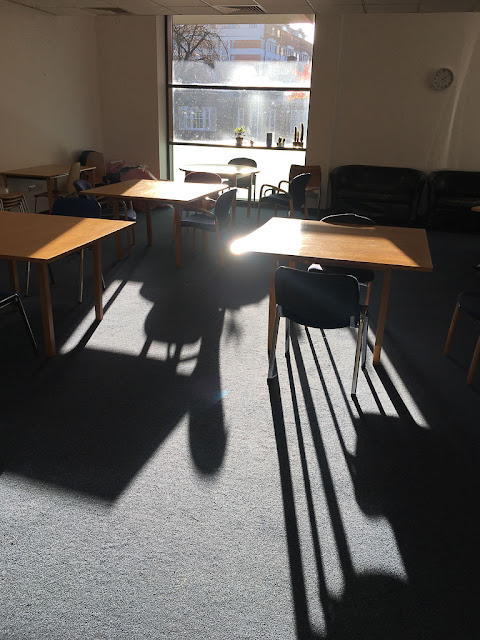 Here's another view of the staff lounge -- this was taken when I went for my afternoon cup of coffee, several hours after that first photo. Dramatic sunlight at this time of year! (When there's any sunlight at all, that is.)

See those cacti on the right-hand side of the windowsill? They've been there as long as I've worked at the school. Here they are way back in 2013. I don't know who cares for them but they seem to be holding their own. Either that or they've become petrified.

Oh, and I did order a dehumidifier yesterday. I left several windows cracked open when I went to work. Olga may have been a bit chilly but the house seemed much drier when we returned in the evening!
Posted by Steve Reed at 6:59 AM