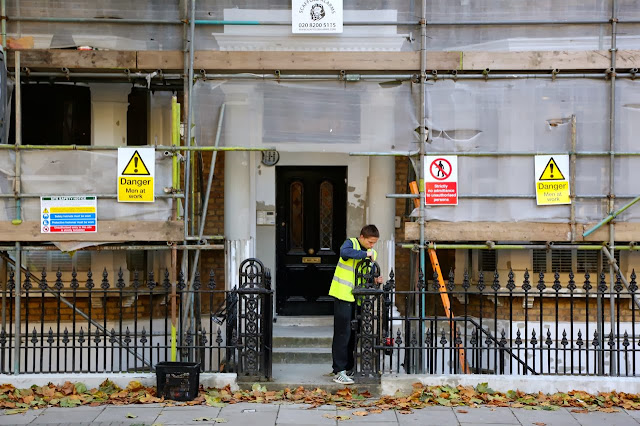 I walked to work yesterday morning. It was clear and sunny, and I wanted to get some exercise and some photos. I found this guy sanding the metal fence outside a house being renovated in Maida Vale. I love that line of leaves at his feet.

I have learned four interesting things within the past few days:

-- For some reason, I always believed the author Daphne du Maurier ("Rebecca" and "The Birds") was a French man, possibly from the 1800s. Why I thought this I have no idea. Maybe I was getting du Maurier confused with Alexandre Dumas. Anyway, I am now involved in a lengthy project at work to clean up our electronic catalog, correcting typos and providing additional information about books where needed. In the course of this project, I discovered that Daphne du Maurier was actually a woman (as the name would suggest), was actually British, and wrote from the 1930s onward. I'm now wondering how many times in conversation I used a male pronoun to refer to her, thus broadcasting to everyone that I am an idiot.

-- From Eric Schlosser's new book "Command and Control," about the history of nuclear weapons, I learned that after the U.S. developed atomic bombs in the 1940s there was a strong movement to create a one-world government, among people who believed it was the only way to prevent the bombs' re-use and spread. Even some people in the military thought this was the best solution. A book of essays was published to that effect titled "One World or None," and more than half the Americans surveyed in a poll said they wanted the United Nations to become "a world government with power to control the armed forces of all nations, including the United States." The U.S. even considered sharing its atomic secrets with Russia in the 1940s -- when Russia did not yet have the bomb -- as a way to forestall an arms race. But more conservative voices prevailed, and we wound up with the Cold War. Fascinating! 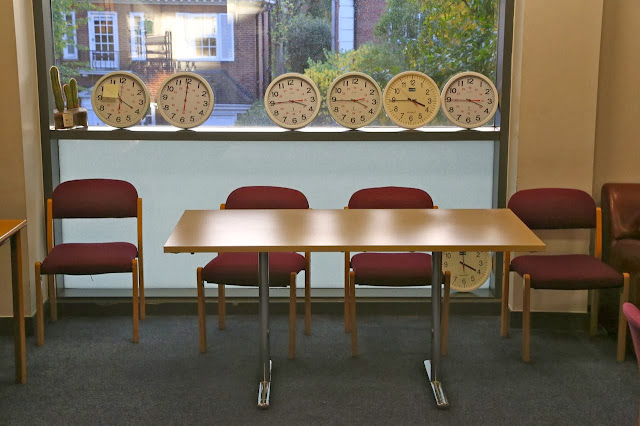 -- I learned that if you have clocks that automatically reset themselves when there's a time change, as many clocks do nowadays, putting them in the window apparently helps them figure out the correct time. This is our faculty lounge at work, where clocks from throughout the building have come for their autumn reset. (We just went off Daylight Saving Time, or British Summer Time as it's called here, on Sunday.) As you can see, some of the clocks have figured it out, and some haven't.

-- I learned that some British kids do trick-or-treat, even though none have ever knocked on our door. Dave took Olga for a walk last night and was approached by two kids in face paint near the corner pub. He said other people were giving them money, but Dave told them, "Go home. You're a day early." Fortunately I don't think they know where we live.
Posted by Steve Reed at 6:58 AM