(Not Really) Rubbing Elbows With Royalty 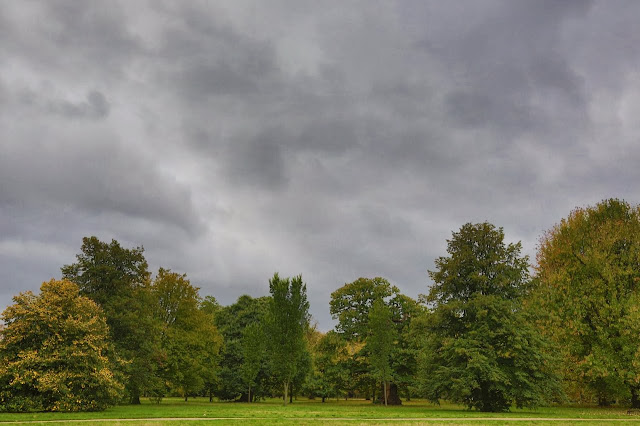 Olga and I were back in Hyde Park yesterday, where the sky, at least part of the time, looked like this. The weather has been incredibly variable the last few weeks. In fact we're supposed to get rain and high winds tonight and tomorrow morning -- and yet right now the sun is shining like it's the first day of creation.

Olga had a great time in the park, as always. I probably don't even need to type that sentence, do I?

Sorry my blog posts have been a bit lacking in substance lately. During the work week there's just not much I can say -- anything interesting that happens usually involves personalities at school, and my mornings and evenings are routine. I suppose I could write about the news, but even that hasn't been too exciting lately. The government shutdown stripped my gears.

I did learn, from the vapid Hello magazine, that Prince Harry and his girlfriend recently came to a James Blunt concert at The Tabernacle in Notting Hill, around the same date that Dave and I went there for lunch in the cafe. So I'm just going to tell everyone that I was there with Prince Harry. What, is that a stretch?

I also saw that some guy from Tennessee got arrested at Kennedy Airport after trying to check four guns onto a flight, apparently violating New York City laws against bringing guns into the city. I'm guessing the gun people will be all over this. The situation sounds a bit peculiar -- apparently two of the guns were painted, one silver and one purple, with missing serial numbers, and one was loaded. But at least he was trying to check them and not carrying them on!

Last night, I went with our friends Sally and Mike to see the Ballet Rambert at Sadler's Wells in Islington. Contrary to the name, the performance was more contemporary dance than traditional ballet, with an odd mix of theater thrown in. The best of the three pieces was called "The Comedy of Change," inspired by Darwin's theories on evolution. The dancers emerged, reptile-like, from fabric pods and went on to engage each other, organize themselves and finally create (on stage) a tin-foil Buddha-like idol, which (spoiler alert!) they smashed at the end. That pretty much sums up the story of civilization, which the possible exception of nuclear weaponry.

(Photo: Hyde Park, yesterday. This is an HDR photo in art vivid mode to show the texture of the sky.)
Posted by Steve Reed at 8:52 AM