A Half-Marathon and a Wayward Butterfly

Sunday was beautiful, warm and sunny, and Olga and I didn't want to stay inside on such an incredible fall day. So in late morning we set out for Hyde Park, thinking we'd have our normal jaunt through the greenery.

What we didn't count on was the Royal Parks Foundation Half Marathon. We got to the park only to find a steady stream of thousands of huffing and puffing runners, which we somehow had to cross to get beyond the park's outer edge. I found someone from a runner aid station and he directed me to a designated gap in the route, where I stood with a few other people and an attendant. When the attendant gave the word, we bolted across, and we were finally in Hyde Park.

Olga had her usual tremendous time chasing other dogs and her Kong toy. The runners made a wide loop around the grassy area where we were, so I sat and read my book as Olga ran free, and every once in a while I looked up to see if the crowds had thinned. We were there a few hours and there were still people running past when we stood to go home. 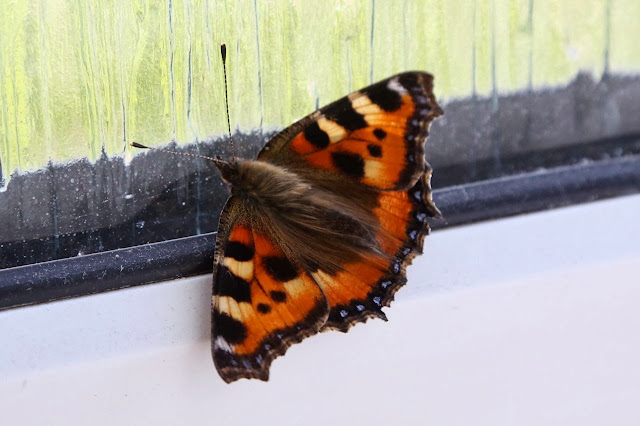 Yesterday morning I was vacuuming the bathroom when I found a small, bark-colored moth folded up in the shadows behind the door. I had the presence of mind to keep the vacuum cleaner nozzle away from it, and decided to leave it there -- I figured it would come out on its own when it got dark, and maybe I could shoo it outside.

A few hours later I went into the bathroom and found it on the windowsill. So I opened the window, and the critter quivered a bit and then spread its drab bark-colored wings to reveal glorious orange hemmed by blue spots. Turns out it wasn't a moth at all, but a small tortoiseshell butterfly. After it had awakened completely, it fluttered off into the sunny afternoon.
Posted by Steve Reed at 7:46 AM