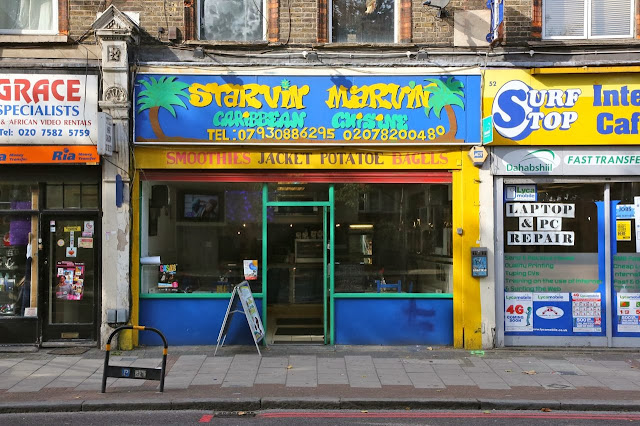 The transportation gods seem to be working against me. On Wednesday, I couldn't get to work via my normal tube route because the Jubilee Line was closed at Bond Street -- something about someone hearing "voices in the tunnel." (Presumably it was established that these voices were not coming from within that person's own head.) And then yesterday evening much of the western half of the Central Line was closed -- signal failure at Holborn, apparently -- which meant I had to elbow my way onto a jam-packed Circle Line train that ultimately took me to a stop not-so-close to my house. *Sigh*

Dave was caught up in it too -- he took a bus home, arriving a few minutes after me -- so we abandoned plans to cook last night and ordered pizza instead. 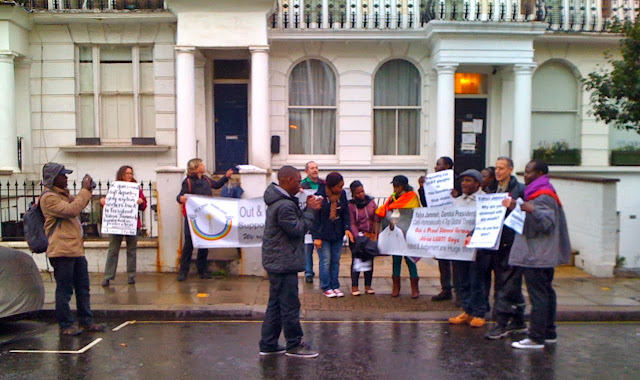 One fringe benefit of the tube confusion -- walking home from my not-so-close tube stop, I passed a demonstration by LGBT rights activists in front of a Gambian diplomatic building in Notting Hill. They were protesting comments by the Gambian president, who recently told the United Nations that homosexuality is a deadly global threat. The demonstrators chanted in favor of gay rights throughout Africa, which as we all know has a completely dismal record when it comes to LGBTs. All I can say is, bravo! I gave them a thumbs-up to show my support. (Excuse the lousy iPhone photo -- my old iPhone 3G is all I had on me at the time.)

Now I'm awake ridiculously early for no good reason and it's raining steadily outside. The sound is peaceful and comforting, but I'm not looking forward to walking the dog.

(Top photo: Kennington, South London, on Monday.)
Posted by Steve Reed at 5:37 AM