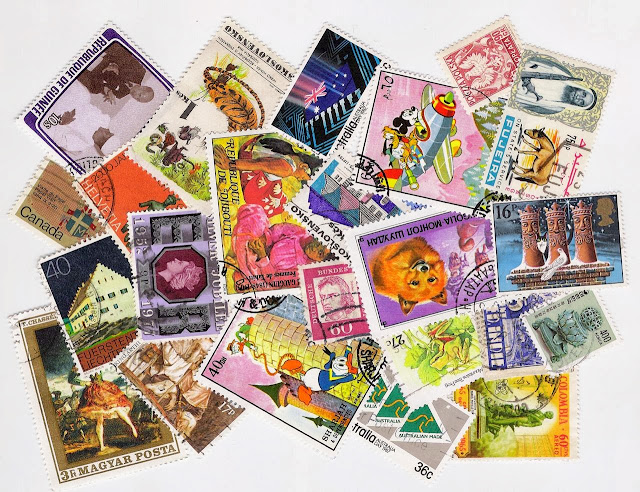 My inner philately nerd was thrilled a few days ago when I got an envelope in the mail from Linda Sue, containing collectible worldwide stamps.

Linda Sue was the recipient of the beads I found on the street a few weeks ago. Knowing that she is very artsy and was likely to put them to good use, I mailed them to her in Washington state. She returned the favor a hundredfold by sending me a nice mixture of loose stamps and a few full sets that she had kicking around. 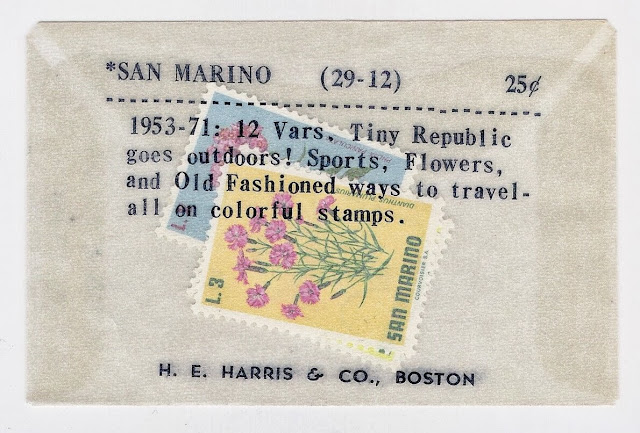 When my brother and I collected stamps as kids, we got them in envelopes just like this one from an assortment of stamp companies. The arrangement worked like this: We'd buy a special bargain stamp we saw advertised in a magazine (maybe "Boys' Life"). When the company sent that stamp, it would also send others, with the understanding that we'd pay for the ones we wanted and return the rest. As you can see, they weren't very expensive. We were offered a special deal if we bought them all, but being parsimonious, we never did that. We'd then get more stamps "on approval" every month after that until we cancelled.

In addition to H. E. Harris, the granddaddy of stamp companies from which this envelope came, we bought stamps from the Jamestown and Falcon stamp companies, and probably others too.

I never dealt with the Valley Stamp Company. I guess that was just a western outfit.

Anyway, Linda Sue's mailing made me nostalgic for my childhood stamp collecting days. I spent hours and hours with my stamps. They taught me all about the world. I lament the apparent dwindling interest among young people for postal paraphernalia these days, but at the same time, the world is so much more accessible through the computer -- they can connect with distant people and places much more easily than I ever could.

(And for better or worse, they're probably getting a much more realistic, unvarnished look at the globe. Mine was rose-tinted by the carefully chosen artworks, buildings and national heroes that various governments selected for depiction on their postage stamps!)

I think I'm going to leave some of these stamps in their envelopes and simply tuck them into my album -- the envelopes are just as awesome as the stamps themselves. Thanks, Linda Sue!
Posted by Steve Reed at 7:32 AM