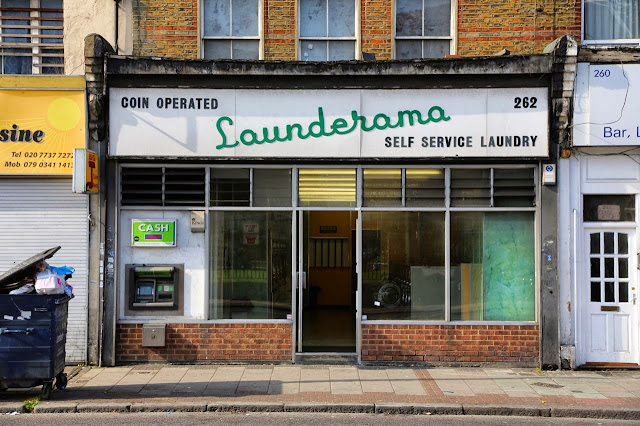 I have to love a place called Launderama. In fact, "-ama" at the end of pretty much any word, to designate a store, guarantees that I will love it: Plumborama, Photorama, Foodorama. The possibilities are endless.

I've decided to read Bram Stoker's "Dracula" for Halloween. (It was an even toss-up between that and Mary Shelley's "Frankenstein.") So far I'm about 65 pages in, and I'm impressed at how compelling it is. I thought it would be sort of dry and Victorian and tedious, but Stoker is a good writer. The early Dracula movies closely followed his descriptions of the fog, forests and craggy Carpathian mountains, not to mention Dracula's forlorn castle.

I've never been much for vampire stories -- especially those in the new, "sexy vampire" genre, which have more to do with titillating teenage girls than anything else -- but hey, this is a classic! I must admit I feel a little creepy reading it on the tube, though. 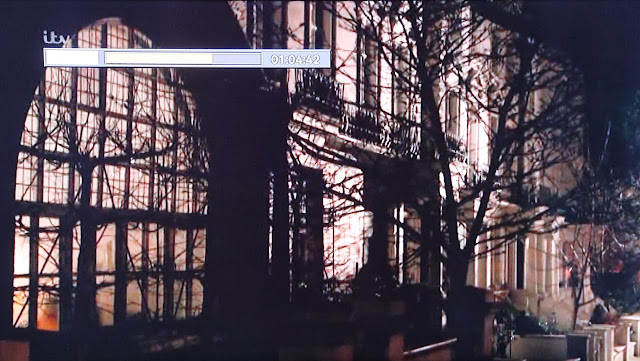 In other news: This is a shot of our TV screen, which is why it's so terrible. I took it during this week's episode of "Downton Abbey" because this street is Denbigh Road, which runs right outside our apartment complex. I walk up this street every day to get to the tube! On the show, it's meant to be the exterior of Michael Gregson's London flat. I immediately recognized that distinctive arched window when it appeared on the television.

Dave and I walked Olga there right after the show, and unfortunately the hedge in front of the window is in full leaf now, so I couldn't really get a photo from the same angle. That tree on the right has since been cut down and is now the stump chair.

I remember seeing film trucks at this location last winter but I never imagined they were filming Downton Abbey!
Posted by Steve Reed at 6:53 AM