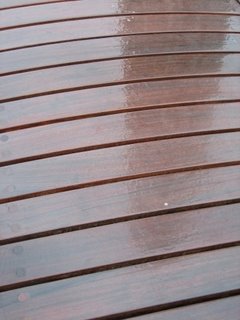 This is the kind of weekend we're having - clouds and rain. It's hard for me to take photos in the rain, because I usually respond to sunlight and shadows. But I also feel like I need to post a rain photo on a rainy day, for the sake of journalistic accuracy! Yesterday I rose to the challenge, went out and took some rain shots.

The photo shows the Trump International Hotel and Tower reflected in the newly installed benches on Columbus Circle. The Trump building was originally built in 1969 as the headquarters for Charles Bluhdorn's Gulf & Western Corp. But apparently it had an architectural flaw: It swayed pretty severely. (All skyscrapers sway a little, but this one got a reputation.) When Trump retrofitted it to become an apartment hotel, he reclad it and stiffened it up a bit.
Posted by Steve Reed at 11:02 AM