Requiem for a diner 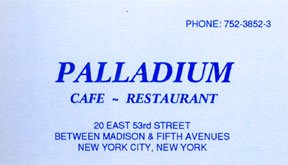 I first visited New York in September 1995, on a long weekend with my friend Sue. I was living in Florida at the time, and we flew up on a godawful discount carrier called Sun Jet for some adventures in the city.

We stayed at the Gramercy Park Hotel, which at the time was a slightly down-at-the-heels place with relatively cheap rooms. (My memory is $85 for a double. Could that possibly be right?) We visited all the essential spots like Rockefeller Center and the United Nations. One night we drank way too many Tom Collinses and had a wild, drunken cab ride back to our hotel. The driver asked quizzically: “Have you been drinking beer?” When we managed to say no between bouts of laughter, he pressed on: “Have you been drinking WHISKEY?”

What’s the word for my reaction to New York -- captivated? Awestruck? I guess those both apply. I felt like I came to understand so much of our American culture just by being in the place I’d seen on TV for decades. Standing outside Tiffany’s, I could channel Audrey Hepburn. Sort of.

Anyway, one afternoon, when Sue and I were exhausted from walking uptown and down and standing around at the Museum of Modern Art, we popped into a diner on East 53rd Street. It was called the Palladium, and it had a sort of purplish-maroon-beige color scheme. We sat at the bar. I ordered blueberry pie a la mode, and I swear it was the best blueberry pie I ever ate.

After that, every time I visited New York, I always made a stop at the Palladium. I’d eat and then check out the African art gallery nearby, with its Dogon ladders and Tuareg tent stakes. After I moved here in 2000, I often Palladiumed with visitors. I can’t remember when I last stopped in, but I know I once again sat at the bar. Maybe I had pie, or maybe a Greek salad.

Last Saturday, I thought I’d have breakfast at the Palladium. Imagine my shock when I got there and found it GONE.

Not gone, as in merely closed. GONE, as in, the building is gutted and being torn down and something else is going up in its place.

I kept walking up and down the block, thinking there must be some mistake. I must be on the wrong street. I didn’t recognize anything. I knew the African art store had closed some years back, but I never heard a peep about the death of the Palladium.

I came home and looked up the phone number. When I called, a man with a heavy Indian accent answered, saying something that made it clear the number no longer served a restaurant.

I told him I was trying to reach the Palladium.

“Palladium is close for good,” he said, and hung up.

So there you have it. No more Palladium. I’ve already suffered the recent death of the Skyline, a favorite diner on the Upper East Side where I once had the world’s best vanilla shake. I’m sorry to have it happen again.

As much as my blog is about transience, change can be hard to take.