I was supposed to go to today’s Pride Parade with a friend from Long Island. We were going to meet at 1 p.m. in Madison Square Park, near my apartment.

But about noon he called to say he and his partner had decided not to come, because of the weather. (And I don't blame him. It wasn't the greatest day.) So I did some stuff around the house and didn’t get out there myself until 1:30 or so, by which time things were already well underway.

I watched at the corner of 29th Street and Fifth Avenue. These upper reaches of the parade route are neither as crowded nor as enthusiastic as those in Greenwich Village, where on good years the sidewalks are packed five or six people thick, and walking far is out of the question. Here, it seemed to be a mix of gay guys, curious straight couples (conspicuously holding hands) and foreign tourists.

I arrived just as Sen. Chuck Schumer passed by, followed by squadrons of elaborately dressed drag queens from ethnic and immigrant gay organizations: 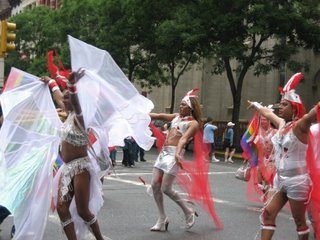 I stayed about half an hour, long enough to see a lively gay gospel group, a gay men’s flag corps (you just know they were living their high school fantasies), the “black and brown lesbians against racism” (or BABAR), and every PFLAG chapter in the tri-state area. Oh, and Mark Green, who’s running for...something.

I got my requisite free condom and lube from the Asian and Pacific Islander Coalition on HIV/AIDS. A pair of Japanese tourists standing next to me kept taking pictures of the package, featuring four Asian men and the words “Choose Safer Sex.” I’m not sure why they were so fascinated.

And of course, there was the Starbucks float: 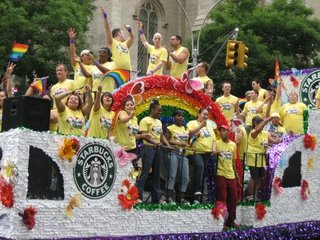 (Forgive me for being a corporate stooge, but as you all know, I loves me some Starbucks.)

All in all, I had a good time, and I saw just enough to bring to mind the point of the parade: That there’s room for all of us in this huge sprawl of a city, that we’re all more alike than we are different, and that each of us should celebrate our identity daily, whether gay or straight, marcher or spectator.
Posted by Steve Reed at 12:06 AM