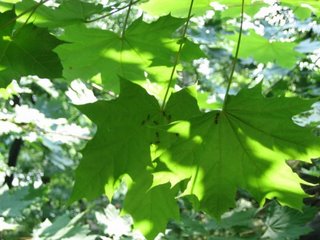 The sun through these leaves first caught my eye. But as I was preparing to take the photo I noticed little black specks on the undersides. Ants -- and they were farming aphids!

I was walking with my friend Rob at the time, and I called him over to see. But Rob, who was eager to get home to his dog and probably not the least bit interested in a bunch of bugs, objected. (Rather fiercely, I thought.)