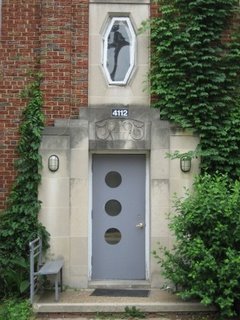 We continue "Washington Week" with a stop in Hyattsville, a northeastern suburb of D.C. My grandparents lived in Hyattsville and my Mom and uncle grew up there, and my brother and I went there every year on family trips. So even though we no longer have relatives in the area, I try to stop in whenever I can just to take a look at the old neighborhood.

My grandmother actually never liked Hyattsville much. She once said she thought it was "the end of the world." But she lived there for 43 years; go figure.

My brother and I liked it a lot. During our vacations we explored the neighborhood, with its alphabetically organized streets, and walked at least once a day to the "corner store," where we bought disgusting stuff like cream soda and Sweet Tarts. We'd haul our faux groceries back to the house and camp out in front of my grandmother's black and white television set in the basement, watching ancient recycled shows like "Dennis the Menace" with Jay North. My grandmother warned us that if we ate all that sugar we'd become diabetic, but fortunately we just got hyper.

My grandmother died in 1989, and soon afterwards we sold the Hyattsville house - so it's been more than 15 years since we had any stake at all in the neighborhood. When I visited last week, I was happy to see that things look pretty good. The corner store, never a thriving enterprise, is now a sculpture studio for a pair of professors at the University of Maryland. And my grandmother's house, though not the way she would have kept it, had flowers in the yard and homey touches that suggest the people who live there enjoy it. 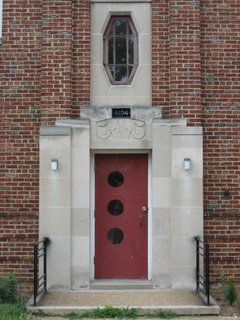 The house itself is really boring architecturally. But on the same street are these apartment buildings - nondescript for the most part, but featuring these Deco doorways. (The porthole windows are awesome!)

I remember walking past these apartments as a kid (and later, a teenager) and wondering what it would be like to live in them. I always had a kind of apartment fetish - I used to lock my bedroom at home and call it "my apartment." Something about having your own private space and an independent life, especially in a city, really attracted me. Even a city my grandmother deemed "the end of the world."
Posted by Steve Reed at 10:44 AM