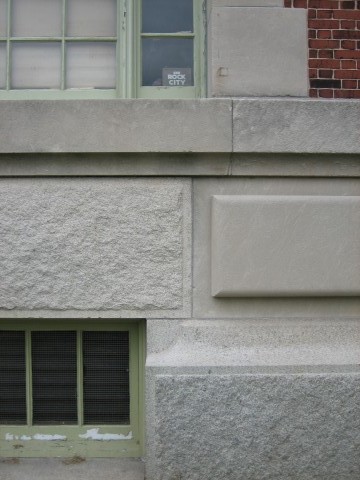 Mom and I went out to the Statue of Liberty and Ellis Island yesterday. On the boat we talked to a guy who mentioned catching "stripers" in New York Harbor. We had no idea what a striper was, but we both inwardly guessed striped bass, which turned out to be right. We didn't have to embarrass ourselves by asking!

I'd been to the statue before, but never to Ellis Island. On this particular day it was mobbed with school children, whose voices ricocheted around those vast, tiled spaces like live ammunition. I could only stand to be in the museum building a short time. (When did I become such a curmudgeon?)

We walked around the outside of the museum, where I spotted the scene above. I found it pretty funny that someone at Ellis Island would be touting Rock City as a destination. It seemed so random.

(Rock City is atop Lookout Mountain in northern Georgia. It's a famous old roadside attraction where you were said to be able to see seven states. It advertised with signs painted on old barns throughout the South: "See Rock City!")

Anyway, Mom's visit ended this morning. I just put her in a cab to LaGuardia.
Posted by Steve Reed at 10:49 AM