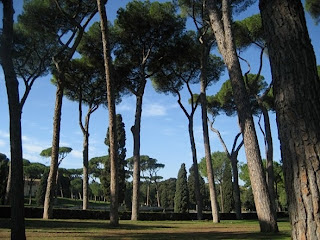 So, what can I say about Italy? It was very fun, incredibly educational, periodically frustrating, and totally exhausting - in a good way. Here's a quick rundown on what we did.

We began in Rome, where we spent four days seeing the Roman ruins and wandering the city, as well as visiting the Vatican. We saw all the required stuff: the Spanish Steps, the Colosseum, the Sistine Chapel, St. Peter's. I even threw three coins into the Trevi Fountain, but alas, I didn't marry an Italian. (Maybe that magic doesn't work for gay weddings? Italy is very Catholic, after all! Or maybe it just takes a while to kick in...) 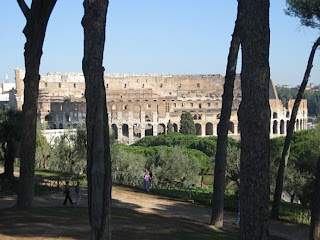 The art, of course, was exquisite. The Caravaggios at the Villa Borghese were amazing, and I developed a new appreciation for sculpture after seeing works by Bernini and Canova.

But Rome was also overwhelming. We had a little hotel mishap on our first night - our reserved hotel couldn't put us in our room because of a plumbing problem, and had to send us instead to another hotel which proved far inferior. But we rolled with it. I'd prepaid the rooms and couldn't face doing battle with Italians on my first night in the country. Also, traffic in Rome is INSANE. 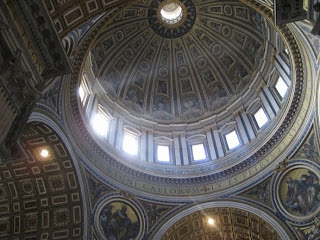 From there we went to Florence, which was kind of like living in the Renaissance wing of the Metropolitan Museum, if I can be totally New York-centric. I saw so much art and architecture that I nearly went crazy. Really. The Uffizi was beautiful but exhausting. And I saw Michaelangelo's David, but I have to say, I don't quite get the appeal. The head's too big, the hands are too big - he's all out of proportion. Am I crazy?

We went to Pisa on a day-trip and saw the leaning tower. Didn't climb it, though. I am happy to report that it looks just like it does in Bugs Bunny cartoons.

While in Pisa, we got caught in a train strike that threatened to strand us. But we rose to the occasion and caught a bus to nearby Lucca, where we disembarked in the middle of - I kid you not - a hailstorm! Just one of those days. But the storm subsided quickly and we had a great time walking around Lucca, and then caught a train back to Florence after the brief strike ended. 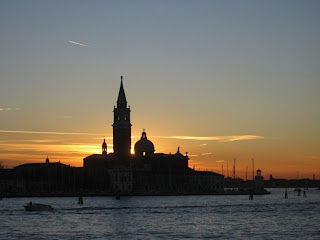 We spent our final days in Venice. By this time I'd contracted a hideous head cold - probably from that crazy hailstorm - but still enjoyed wandering the tiny, narrow streets and alleys. Because it's on a series of islands, Venice has no cars. There were, however, boatloads of tour groups, and I have never seen so many pigeons in my life as I saw in San Marco - and coming from a New Yorker, that's saying something!

We visited Peggy Guggenheim's amazing modern art collection, just to get a break from all the Madonnas and Titians. We also had drinks at Harry's Bar, visited the basilica and the Doges' Palace, and strolled the waterfront nearly all the way to the end of the island, where there's a nice green park. If the canals really are polluted, I sure couldn't tell - they're a beautiful Mediterranean blue color. (And also look just like they do in Bugs Bunny cartoons!)

Now, I'm battling down the last of my cold and adjusting to life in these United States. I'm off to a wedding in Rhinebeck, N.Y., this weekend, and then we're into Thanksgiving - my favorite holiday! Whew!

(Photos from top: Trees in the Villa Borghese, Rome; the colosseum from Palatine Hill, Rome; the dome of St. Peter's Basilica, Vatican City; sunset on the Grand Canal, Venice.)
Posted by Steve Reed at 9:35 AM