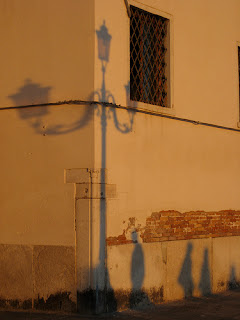 I watched “Lost in America” last night, inspired by my pal Merle, who mentioned it recently on his blog. It’s a 1985 movie about two yuppies who cash out, quit their jobs and take to the road in a motor home, yearning to “drop out of society” and live free like the guys in “Easy Rider.”

I’d never seen it before, but the theme immediately appealed to me. Who doesn’t have a dream like this, after all? I admit that one of my back-up plans for my own life, should I lose my job, is to travel around in a van and see the country. (More fantasy than plan, admittedly.)

When I was a kid I longed to live in a motor home. In fact, I used to buy “Motor Home” magazine, or something like that. Once, during a Boy Scout retreat, while everyone else was playing football, I spent a couple of hours cleaning the kitchen of a motor home used by our scoutmasters, imagining myself piloting it across the country. (I don’t think I wore an apron, but I’m not sure.)

Things don’t go well for the yuppies in “Lost in America,” primarily because of a divorceable offense by the wife. Ultimately, it was an odd movie -- it seemed to end very abruptly, and to reinforce the idea that conformity and the corporate grind are really the way to go. (Now that I think about it, things don’t go well for the guys in “Easy Rider” either.) But what’s wrong with a little escapist dream?

Maybe someday, I’ll be blogging from a van!