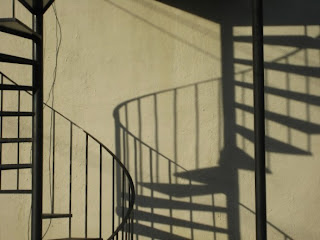 I spent Saturday afternoon exploring D.C. with Reya, who helped me appreciate an unseen dimension of our nation’s capital - its underlying energy. And no, I don’t mean lobbyists.

For example, I knew nothing about the Masonic pyramid at the heart of the region from DuPont to Logan Circle and down to the White House. But it was interesting to see how the area really did seem to possess its own subterranean hum, both positive and negative. We saw the negative when we watched a driver get into a hostile (and unnecessary) confrontation with a skateboarder over street space. And we found the positive when we discovered a musical sculpture in front of 111 Vermont Avenue. Made of metal rods, it emitted a whole orchestra of harmonic tones when touched.

It was great to see and spend time with Reya, whom I feel I’ve known for years. Some of that is due to blogging, of course, which introduced me to her backstory. But we bloggers only offer up parts of ourselves for public consumption, and you never quite know what the real person is going to be like. Reya’s blog is faithful to her personality -- she’s a fellow urban wanderer who sees and senses so much. And yet what she sees is so different from what I notice myself. 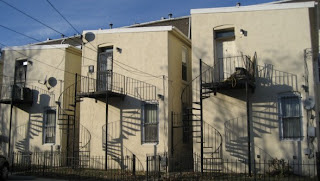 I came back on yesterday’s 2 p.m. Acela Express from Union Station, and promptly jumped into the whirl of grocery shopping, unpacking and spending time with my attention-deprived cat. I bought her a little laser light toy, which was a big hit with Kevin’s cats. Armenia chases the light beam, but also seems alarmed by it -- she runs after it and then runs up to me, meowing frantically: “What is THAT??”

I’m also finally taking on the arduous task of uploading all my photos from Italy. You can see them on Flickr (click on the badge at right) if you’re so inclined.

(Photos: The rear of row houses south of U Street N.W., Washington D.C.)
Posted by Steve Reed at 1:17 PM