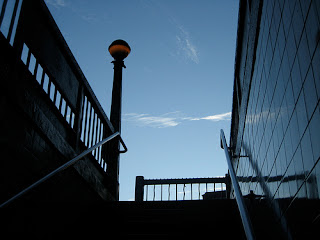 Yesterday was a day of leisure. We had no agenda whatsoever. Kevin and I spent the morning at his apartment, doing stuff on the computer and hanging out with his new cats.

Then we went to some thrift stores in the afternoon - our own version of Black Friday, I suppose. I had a blast combing through racks and racks of t-shirts. I'm always amused by t-shirts. People put the strangest messages on them, like: "My mommy thinks I'm special." (On a man's X-Large.)

I bought a $2.99 t-shirt featuring a map of the Greek Isles, which I visited in 2000. That was the trip of my worst travel mishap ever - a taxicab drove away with my bag, never to be seen again. I flew home with no more than the clothes on my back. (Thank God I was wearing a money belt with my passport and ticket in it!) But I still had a great time on the trip, so now I have a souvenir of sorts.

Last night, we went to see "Beowulf" in 3-D. The computer animation is a little strange, but the movie is certainly worthwhile - the dragon-fighting sequence at the end is a jaw-dropper. It's great that Hollywood managed to turn a relatively stale high-school literature assignment into a popular movie. We gave it two thumbs up!

(Photo: Emerging from the subway in early morning, Houston and Broadway, Manhattan, October 2007)
Posted by Steve Reed at 1:19 PM