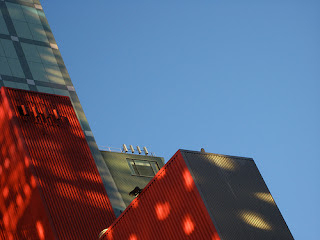 I was killing time on a subway platform one day this week, looking at magazine covers at a newsstand. One of them had a photo of Britney Spears on a stretcher, the word “INSANE!” hovering over her in big block letters.

Is it me, or has our societal fascination with celebrities taken on a really macabre edge? Sure, Britney and Lindsey and Paris and Tom Cruise all fuel these fires with their public antics, but our rapaciousness for news about them is alarming. It’s not just that I think we should be spending time on more serious subjects - though we should. It’s the cruelty associated with this celebrity-stalking.

I mean, poor Britney. The woman has lived her entire life, practically, under an intense public spotlight. No wonder she has issues. I’d have issues, too.

And Tom Cruise, well, he’s kind of an odd bird. I watched his Scientology video (courtesy of a link from the Web site of The New York Times!) and it made NO sense. Maybe it would make sense to an aspiring or practicing Scientologist. But the point is, Tom Cruise is allowed to hold beliefs that the rest of us find a little strange, and it’s chilling that doing so leads to such a feeding frenzy in the media.

A little celebrity journalism is fun. (Hey, I subscribed to People magazine in college.) And I realize that we focus on celebrities because we want to escape from the dour “real news” out there. But let’s try to have a little more compassion, eh? Britney Spears and Tom Cruise need to lead their own lives, and when they make a misstep, maybe we shouldn’t revel in it quite so much.