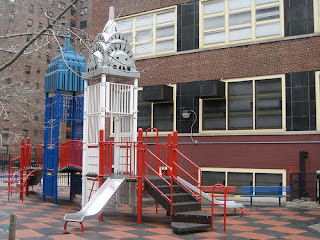 Isn't this a great set of playground equipment? It's made to resemble the Chrysler Building and the Empire State Building. Instilling community pride in the kiddies, I suppose. I found it while wandering in Chelsea a couple of weeks ago.

Wandering is again on the agenda this weekend, naturally. I have a blissful weekend of unallocated time, which I'm really looking forward to.

Saw a couple of movies last week: "Atonement," which was grim but beautifully filmed and well-acted, and "Cloverfield," which I saw because I was curious how a monster attack on New York would be portrayed. It was chilling to see how closely "Cloverfield" borrowed from 9/11, actually - debris whooshing down the streets after buildings collapse, fluttering paperwork in the air. But otherwise, it's a pretty silly movie.
Posted by Steve Reed at 11:34 AM