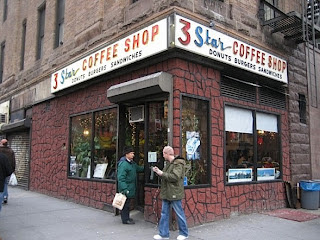 I'm having a great weekend! Went to the gym and had a massage yesterday, which is always welcome, and then met up with my friend Rob to wander through Central Park and the Upper West Side.

Central Park was chilly and the day was gray, but it had a kind of stark beauty: the bare trees, the steely sky. We sat on a park bench by a playground and I was absurdly reminded of the Simon & Garfunkel song "Old Friends," in which two old guys sit quietly together on a park bench. One of the lines is, "How terribly strange to be 70." At 41, I don't think I deserve a starring role in that song just yet! (And Rob's younger than I am!)

We eventually made our way to the 3 Star Coffee Shop at 86th and Columbus, an old-fashioned diner I've wanted to try. The pie was very average, but the ambience was great - a handful of vinyl-padded booths and lots of formica, and a big hand-painted mural of the acropolis on one wall.

Then I came home and watched "Barefoot in the Park," with Jane Fonda and Robert Redford, in which the delightful Mildred Natwick steals the show. Neil Simon, as usual, wrote dialogue that was a bit too clever to be real - but still, it's a fun movie. And it was great to see the footage of Washington Square Park and lower Fifth Avenue in the mid-1960s.