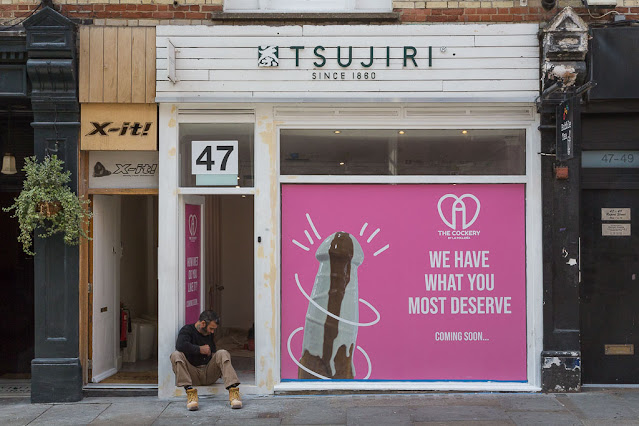 I passed this rather eye-catching shopfront in Soho last week. I thought, "Am I seeing what I think I'm seeing?" Because it's not exactly subtle. The answer is yes -- the place will be called "The Cockery," and according to their online employment ads, "we offer large waffles with a shape of penis." (It's a Spanish outfit, so English isn't their first language.)

Potentially popular with bachelorette parties, I thought? But another employment ad specifies that the place is a "quirky, funny, extroverted and slightly transgressive GAY waffles shop." So there you have it. My next birthday destination.

Well, I may have spoken too soon about our evolving library policies. We may continue quarantining returned books after all. My boss is still trying to figure it out. The problem is, there's little clear, library-specific up-to-date guidance from the health authorities, at least that we've found. The UK government says businesses can put shared reading materials in their waiting rooms, and Scotland says quarantining shared school materials is no longer necessary. Several university libraries have stopped it, but many other public libraries still do it, according to their websites. I think my boss, in an effort to make everyone as comfortable as possible, is leaning toward continuing some type of quarantine. I can live with whatever policy we adopt.

Also, I did talk her into continuing a couple of our physical newspaper subscriptions. I argued that it's important for the kids to feel that it's normal to have a newspaper around, and it helps them learn the difference between reputable news sources and online baloney. Doing my part for journalism!

We spent most of yesterday rearranging furniture, preparing shelf labels and getting the physical library space set up. More of the same today, after a diversity and inclusion meeting this morning. I've been scarce in blogland because I'm never at my computer, but when things settle down I'll be around more.

Dave and I have started another great TV show: "Mare of Easttown," an HBO detective series with Kate Winslet. We're three episodes in and loving it. We just finished "Young Royals" on Netflix, which was also good, though a bit of a teen soap opera. (It's Swedish, at least, so we could feel more multicultural while watching it.)
Posted by Steve Reed at 6:34 AM

Phew! So glad that penis shape wasn’t an accident. That will be the first place I hit when I’m in London... because it’s Spanish-owned. Mare of Easttown. Exceptional! Complete agree about the Young Royals. We enjoyed it. A well-done teen soap opera. I agree about physical newspapers (as if you needed my support). Now I have a for craving penises... I MEAN WAFFLES!

"Coming Soon"... I wonder if that was deliberate.

Well well. What to make of that. It has grabbed attention and will go off like a rocket, but will it last? Soho encroaching on Hampstead, one bar at a time.

Cheers
P.S. Olga Girl Would Love To Sniff Out A Biscuit Under Her Pink Blanket

I wonder if straight women are allowed to get a waffle there? I would totally eat one (now I'm blushing). Ha!

Weren't there teenaged girls sucking on penis-shaped lollies in A Clockwork Orange or is my mind playing tricks on me? I know that there was a giant phallus sculpture that was used in someone's bludgeoning.
Anyway, I'm sure that the waffle penis business will just explode when it opens.

I kinda like the idea of saying, "I'm headed down to The Cockery."

That is quite an advertisement for the new Cockery Waffle Shop. Reminds me of a local news story that was in our favorite local news source yesterday: https://lostcoastoutpost.com/2021/aug/24/eurekas-gazebo-ner-makes-its-eye-popping-debut/
I think it's a great idea to keep getting newspapers at the library.

I would never have guessed waffles from the poster. I thought ice cream. I read something way back in the pandemic about how unlikely it was to get infected from touching something. it went like this...a contagious person would have had to cough or sneeze on the item and then the person who touched it would have to touch it where the cough or sneeze landed soon after the cough or sneeze and then would have to touch their own nose or mouth. once the experts determined covid was spread by inhaling aerosols, not touching things, I quit worrying about sanitizing the doorknobs and parts of the car.

Not a fan of the new shop - just seems weird to me.
It is better to be cautious at school than to have kids and staff get sick.
Stay safe!

Gay waffles? Are they served on a stick that you dip into syrup, or on a plate (which sounds like no fun at all)? I think you shouldn't wait for your birthday and should go treat yourself asap, and report back.

The store front is eye catching but the bum sitting outside takes away from it.

Mare of Easttown is excellent. I watched it earlier this summer. And that shopfront, hoo boy!

Some of the comments here are as entertaining as the photo! If they ever post an online menu, you'll have to share it with us. Please!

I would think the virus would be so short-lived on a book that it wouldn't be a problem, but what do I know? I guess it's better to be safe than sorry.

Wow on the shop! :) My boyfriend and I are two episodes into "Mare" and enjoying it. Well-acted and realistic, although also depressing and dark. Although set in a different environment, it reminds me of "Broadchurch." It's something about the setting of the small town where everyone knows each other and there are many secrets and tragedies. The awkward relationship between the two detectives also.

We loved Mare of Easttown. Great acting and a good plot. When you finish it, you should give The Americans on Prime a shot. It's about two KGB agents in 1982 posing as a married American couple and spying. It's great so far! (We just started season 2).

I was just telling our daughter that I don't do well with series because I tend to get bored and that we nowadays normally watch a movie for entertainment. We just watched "Quartet" and enjoyed it. Dave might like it better than you, though.

The comments are actually better than the pic, though I'm sure you had fun and lots of funny things came to mind...

I thought of you when I saw that it's a Spanish place. The parent organization is La Polleria -- have you heard of that?

There are no accidents in marketing...

Is it?! I'd never heard of it before. But that's because I deleted my TikTok account.

This actually was IN Soho, so Soho is still just encroaching on itself. :)

We watched another last night and enjoyed it. I'm not sure how many we have left.

I think it would be illegal for them to turn you away! LOL

I haven't seen "A Clockwork Orange" in AGES, so I couldn't tell you. As for exploding penis waffles, well...ooh boy, as you said.

Ha! It sounds like it should be a bar, though, not a waffle shop.

HA! That's hysterical! I can't believe someone climbed all the way up there. It looks like a fairly steep roof!

Yeah, I think surface infection is all theoretical. I'm not sure it's ever been shown to actually occur, though everyone seems to agree there's a slim chance that it COULD occur.

Ha! I think that's actually one of the construction workers outfitting the place.

Makes you do a double-take, doesn't it?!

Yeah, even when libraries quarantine it's only for a few days, and the chance that someone would return a book and another person would check it out right away is pretty slim. We don't have immediate turnaround on very many books.

It's interesting to see Kate Winslet in such an earthy role. So different from what she's done in the past, but she's very good. I think she pulls off a Pennsylvania accent really well!

We actually watched "The Americans" several years ago! I didn't tumble to that until I read your description because it's kind of a generic title. Yes, we LOVED it.

It IS nice to be able to watch something and have it done in one swoop, rather than going night to night.

Kind of surprising to see just walking down the street!

I’d never heard of La Polleria, but I see there’s one in Madrid, which would be a bit of a trek for a waffle — even a penis-shaped waffle. (Polla means cock (not the chicken kind), by the way, and although pollería is more specifically poultry, the name still works.)