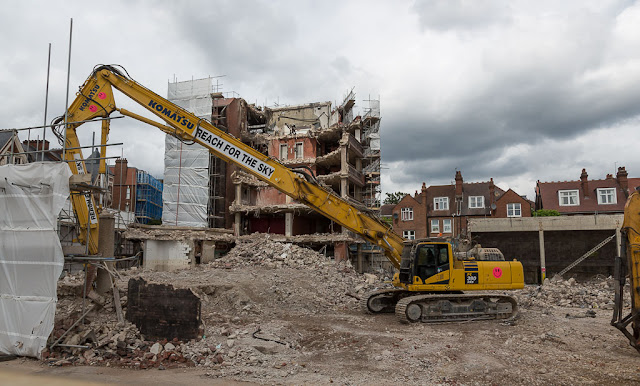 The former council office building down the hill on the high street is slowly being demolished, finally. It's been mostly empty for at least the seven years that Dave and I have lived in our current flat, except for some live-in "guardians" who occupied it to keep vandals away. This whole area, which used to include a shop for kitchen and bathroom fixtures and a building-supply yard, is being redeveloped into new housing.

There's a high plywood fence around the building site so it's hard to see what's going on, but I stuck my camera up over the barrier and shot blindly, and got this picture.

Written on the black plywood itself: 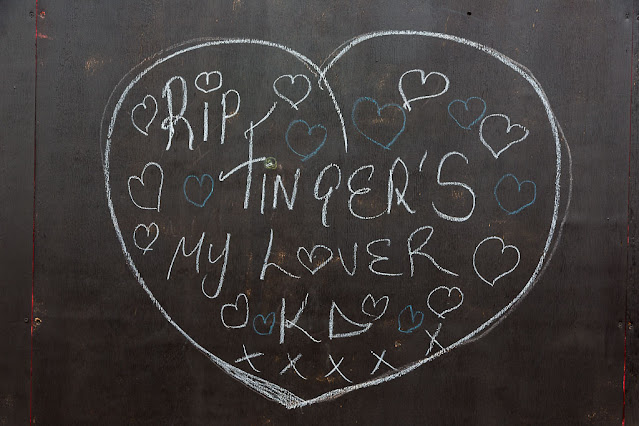 I don't want to be insensitive, but..a lover named Fingers? (Surely not really with an apostrophe.) 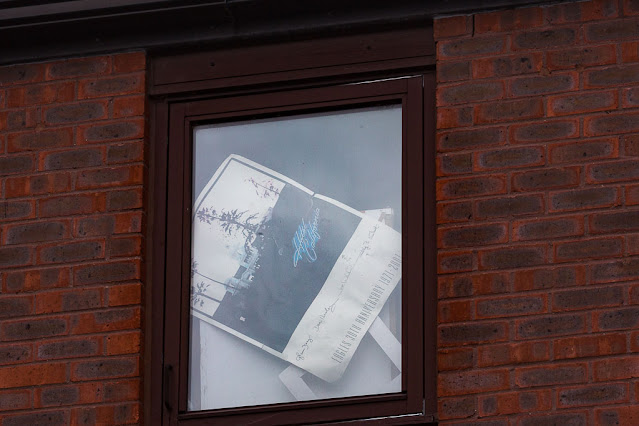 This poster, celebrating the 30th anniversary of the formation of the Eagles (1971-2001), portrays the cover of the album "Hotel California." It's been hanging askew in this window for many, many months and possibly years. I can't remember how long ago I first noticed it but now I always see it when I'm walking the dog. I'm curious what the inside of that apartment looks like. 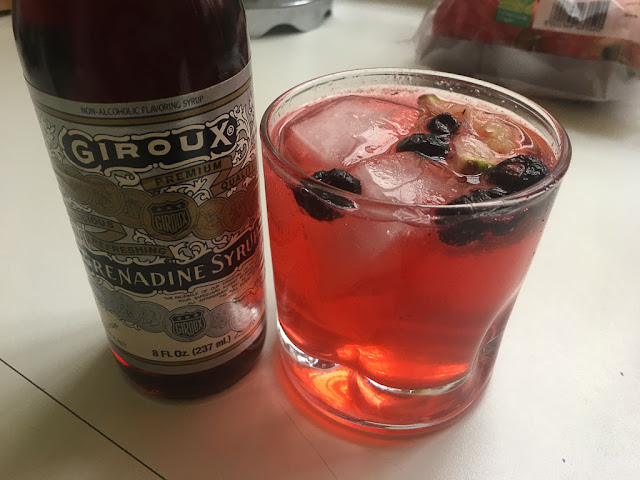 But before I make fun of anyone else's hoarding instincts, let me tell this story. You know Dave signed me up for a craft gin club, in which a bottle of special gin and some other goodies are sent to us once a month. Well, a recent box contained a drink recipe that demanded Grenadine syrup, which the club did not send. So I went rooting around in our liquor cabinet -- which is mostly empty -- and lo and behold, we had this bottle! I couldn't believe it. It's at least ten years old, having come (I'm sure) from the flat we rented when we first moved to London. I think the previous occupants left it behind. But anyway, I used it, and it didn't kill me.

So there's a testament to the value of keeping things.

Last night's movie: "A Hole in the Head," from 1959, starring Frank Sinatra. I watched it mainly because it takes place in Miami Beach, and I wanted to see footage of the city as it looked back then. Sinatra plays a ne'er-do-well hotel owner, and the hotel scenes were shot at the Cardozo, which you can see in this post. It had a great cast: Edward G. Robinson, Thelma Ritter and Eleanor Parker, best known for playing the baroness in "The Sound of Music." It was entertaining despite its terrible title, which makes it sound like a crime drama -- and it's not that at all. It's a warm-hearted family film featuring the song "High Hopes." Go figure!
Posted by Steve Reed at 7:46 AM