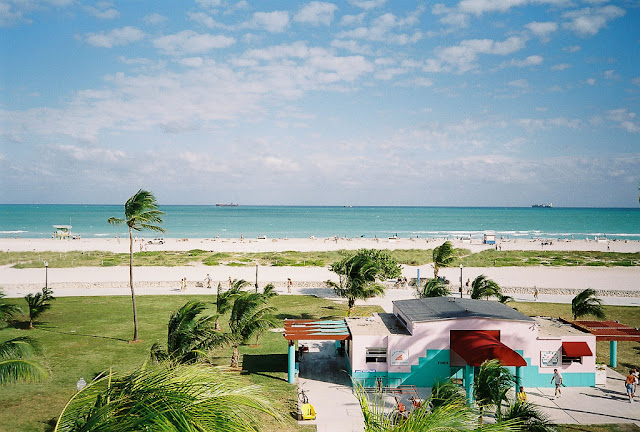 I took a trip to Miami Beach in November, 1996, with my Peace Corps friend Liz. We stayed in one of the old Deco hotels on Ocean Drive, and wandered around for a few days taking pictures. Yesterday I had the negatives scanned so I could put them online.

I was using a compact point-and-shoot Olympus camera that I had for about ten minutes in the mid-'90s. It took pretty good pictures, but its life span was short -- it fatally jammed a year or two after I got it. 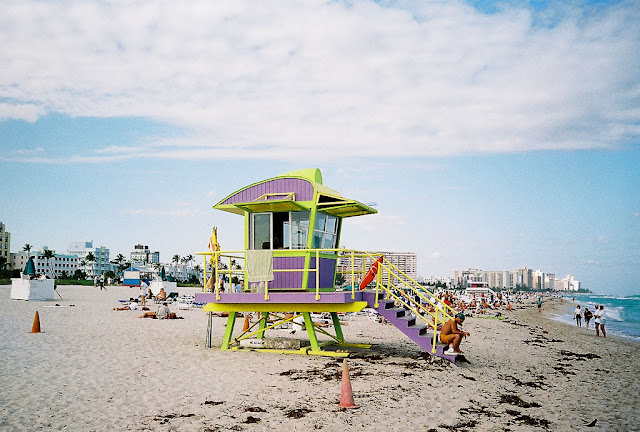 Below, in italics, are excerpts from my journal at the time.

1) The Iguana Woman -- whom Liz and I met outside Lucky Cheng's restaurant, cradling a huge inert lizard wrapped in a special crocheted iguana-jacket. Apparently she runs a shelter for abandoned iguanas -- not something I ever thought of as a compelling social problem, but then I never lived in Miami.

2) The 95-Year-Old Woman -- who begged spare change from me and Liz as we sat outside Java Mania, or something like that, on Washington Avenue. She told me she's 95 and wished she had my legs -- and admonished me not to smoke, as she'd lost children who smoked. (A daughter and a nephew, actually.) She told me she'd lived in Miami Beach for 20 years because it had the best climate -- but she also termed herself "disgusting." She was dirty and clearly wore a bad wig. I felt awful for her and gave her $1.

3) The Wheelchair Woman -- selling strands of plastic beads on Ocean Drive. Bought two for $1 -- she had an "Artists Anonymous" bumper sticker on the back of her chair. It was a pity purchase. I dropped the beads in a planter. I'm sure some partier grabbed them.

I was infatuated with the groovy pastel lifeguard stands on the beach... 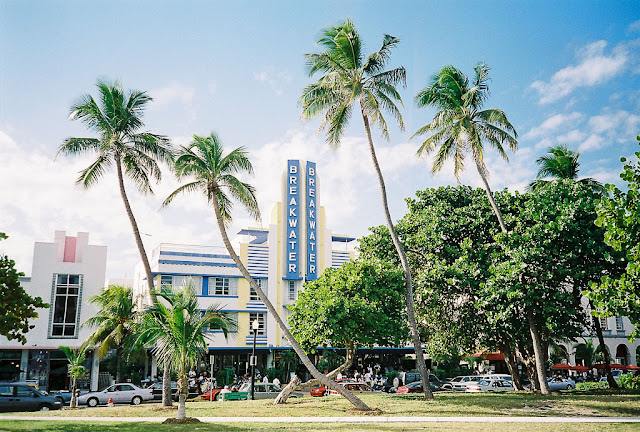 ...and the colorful hotels on Ocean Drive itself. This was after Miami Beach had gentrified -- when I first visited in the mid-'80s these hotels were all painted beige, with phalanxes of retirees lined up on every porch.

More from the journal:

On Friday, we just walked around Miami Beach, up to Lincoln Road and along Ocean Drive. Liz hit a resale shop and got some happenin' green bell-bottom cords. We had dinner at Lucky Cheng's but there were barely any people there -- we had to go back at 11 to see the show, which involved a lot of bad lip-synching and a Latina drag queen getting attacked by a burly Latino man. (This after she ordered him to "eat her pussy." She screamed, "Get off me, you freak!") 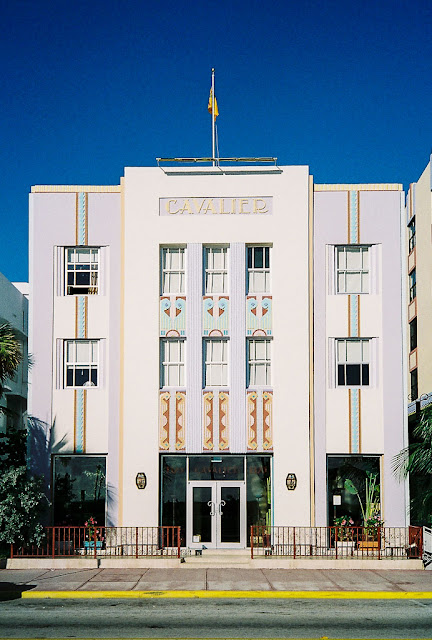 We were blessed with amazing weather, I remember. Hard to believe 1996 was 23 years ago! These images are a little slice of history, even though the buildings (protected by architectural preservation laws) haven't changed much since. 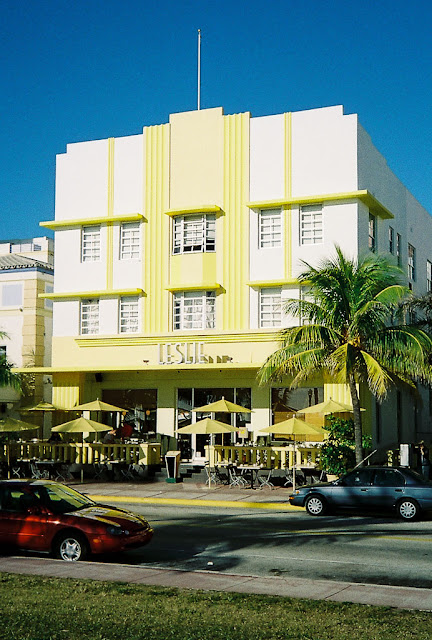 I could have sworn I took a picture of a poster for the "Men Doin' Flowers" show, but I can't find it now. Maybe Liz took it. I'll have to ask her. 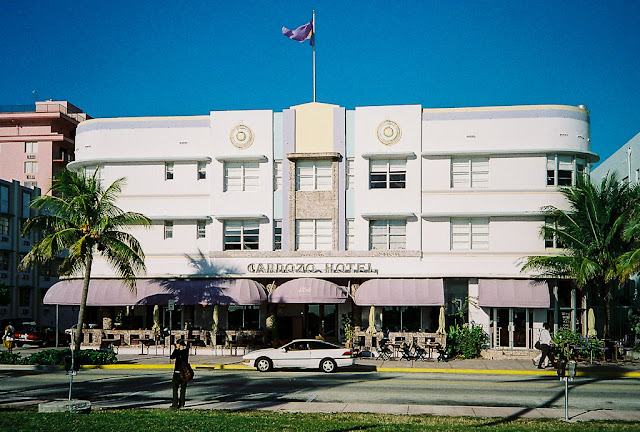 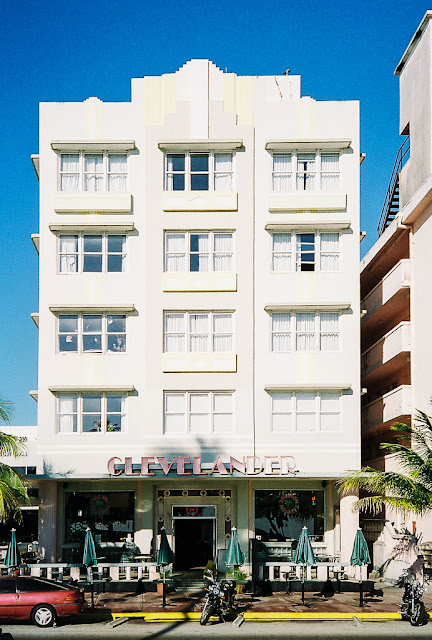 I used to have a great t-shirt from the Clevelander, which had an excellent outdoor bar. (Probably still does.)

Saturday we went to Coconut Grove and there was an art show -- got a CD but nothing else. Last night we went to Wet Willie's, where Liz was highly amused by Hare Krishna musicians on the sidewalk. I had 2 grain alcohol slushies, and then at the Clevelander I had beer and Liz had rum and Coke. Then we went to dinner at the Cardozo... We had sort of loosely planned to go out, but it didn't happen -- which, like I said, was really fine anyway. At least I got a good night's sleep! 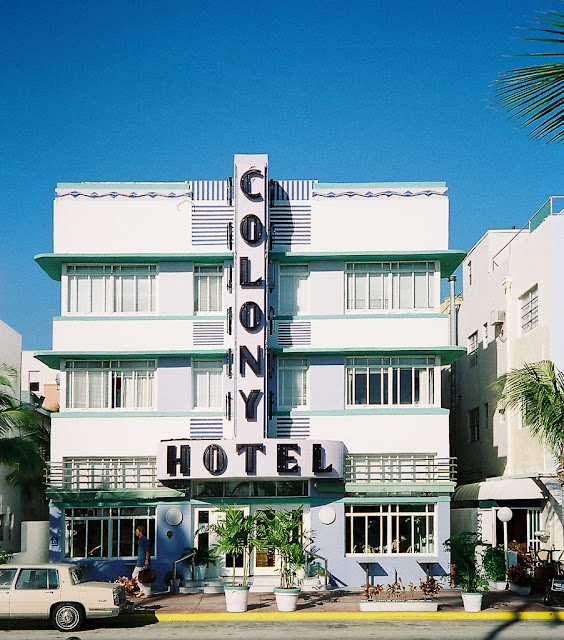 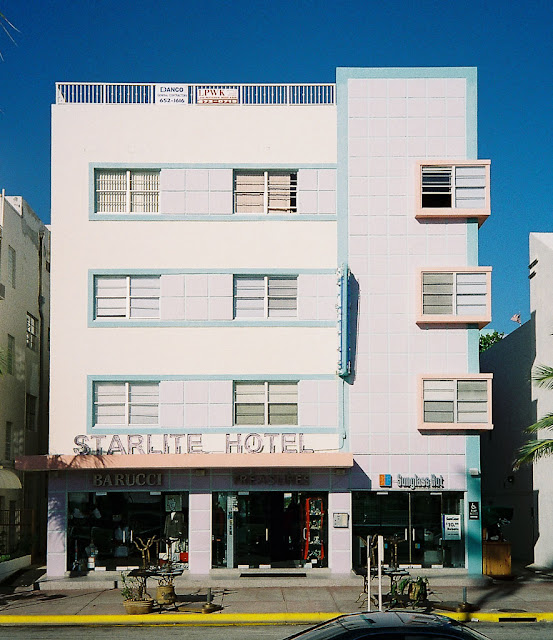 Only last night did I realize, when looking at the negatives again, that the person who scanned them missed two of the frames. Argh! So I need to follow up today and get those shots scanned as well. As my mother always says, everything has to be done at least twice.
Posted by Steve Reed at 6:31 AM

I love the look of those art deco hotels. I am reminded of that brilliant drama series, "The Assassination of Gianni Versace" - some of which was filmed in Miami Beach. I wonder how much they charge for a room at "The Clevelander"... £204 a night for May 1st and the hotel looks very different today!

I also have to say that I love the art deco buildings. Having never been to Miami Beach, I had no idea that the place was a treasure trove of art deco. Thanks for the scans - they have come up well.

Somehow these photos have the intensified color of postcards, due, I'm sure, to the light of a Florida day plus the shades the buildings have been painted. Each one a treasure.

Well that was a visual feast - love all those hotels, but my favorite is the lifeguard stand. So fun!

every single one of those pictures looks like a postcard...so crisp and clean and colorful. everything looks brand new. really cool buildings.

Oh man, these buildings are dreamy, Love the heavy letters of the Colony hotel, cartoony.
Lucky that you found these , lucky that your camera waited to poop out after you had taken these fabulous shots! You could produce cards from these and sell them from a shopping cart , when you are 95 and on the street in a bag, with a bad wig. Full circle sort of thing. But I am serious about cards, I would buy them! Glorious, and having never been to Florida, I am intrigued, Would love to go there before climate change takes it and it falls into the sea! Thank you for posting these shots, for going to the effort, SO worth it!

Wow, these photos are fabulous and they are just as I remember Miami. Given that the last time I was there it was either 1996 or 1997, that makes sense. You got some great photos of those wonderful art deco hotels. 1995 was when I started my ten years of consulting and traveling all over the country on jobs. I can't believe it was that long ago. It seems like yesterday.

These shots have such a crisp look - as Ellen said, they remind me of postcards.

Your eye for buildings apparently is rooted deeply in your past!

You made an interesting comment about the phalanxes of retirees. Where did they go after gentrification?

Very cool photos. I love the light of them.

Really fun to see all the art deco buildings.

I was there in 1968 for the Republican National Convention but I think I spent most of my time on the outside bar with pool just off the beach, maybe at the Delano Hotel(?) The bartender told me was off the next day and invited me to go to South Beach with him. I didn't.

Awesome set of photos and story telling where does time go.

The Leslie is a wonderful building, the cheerful yellow and those louvre type windows. Beautiful.
And the iguana wearing the crocheted jacket!!
I'm thinking the 'postcard' effect in the landscape photos might be to do with the film or the developing.
Alphie

Frances: Aren't they great? Miami Beach is famous for them!

YP: I stayed at a couple of these hotels over the years. The disadvantage is that you're right on Ocean Drive, which is quite a scene at night. They are NOT quiet places to sleep! I stayed at the Breakwater once, but never the Clevelander.

David: Yes, it's famous for its deco architecture. There are very strict preservation laws protecting all the buildings.

Briony: DOESN'T IT?! I really want to know what that show was like!

Jennifer: It really is appalling how quickly time passes.

Marty: The colors are always fabulous in Miami, but that gorgeous sunny day was a huge plus too. That blue sky sets everything off!

Bug: I blogged another lifeguard stand today, just for you!

Ellen: They are all really well cared for.

Ms Moon: I'm so glad I kept a journal from this trip! I never would have remembered those details otherwise.

E: Yeah, there aren't many in Tampa, even on the beaches, which is kind of surprising!

Linda Sue: The Colony sign is all neon blue at night.

Sharon: You and I were there pretty much at the same time! I went several times in those years, since I lived (relatively) nearby.

Jenny-O: Yeah, I always liked architecture. As I mention in today's post, though, these took quite a bit of work to get them this clean-looking. I wasn't as careful with my perspectives and whatnot when I was shooting back then.

Allison: Miami Beach used to be an inexpensive place for northerners, many of them Jews from New York and New Jersey, to retire. But they have literally been run out of town, to other places farther up the coast like West Palm. Real estate in South Beach is very expensive now, and some of the big synagogues and other institutions in Miami Beach have closed down because there are few retirees there anymore.

Colette: You should go down there if you haven't already. They're very cool in real life!

Catalyst: Funny! The Delano is very swank now. I've never stayed there. I can't afford it! I have stayed at the hotel next door to the north, which used to be called the Ritz Plaza. I think it's something else now.

Alphie: WHY didn't I get a picture of that iguana?! LOL!

Great photos! Great that you had saved the negs.