The Carlton Tavern, and a Siege 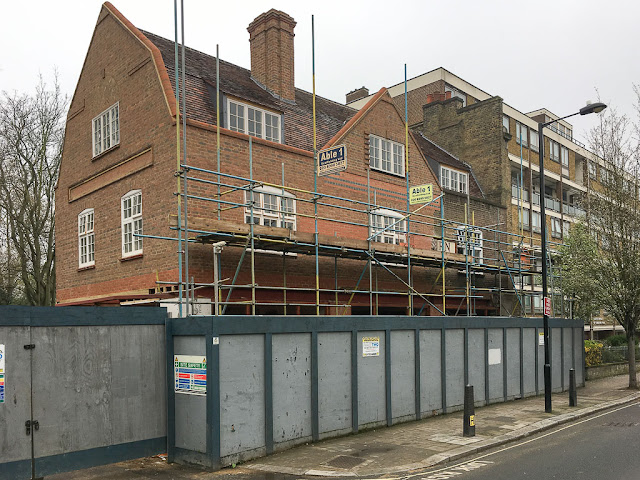 Today, we're back in England. I thought you'd like to see what the Carlton Tavern looks like now. This is the pub that was torn down without permission by its owner, on the eve of being historically landmarked. The owner was ordered to rebuild it, brick by brick. The last time I showed it to you, we couldn't see the structure because of scaffolding, but now we have a clearer view.

It looks pretty good, and the basic shape of the building is the same, but I miss the wonderful old tile lettering on the original facade. Maybe that's still to be installed? You can see traces of it next to the window on the far right. (That's the portion of the old building that didn't get demolished.)

I'm looking forward to stopping in and raising a pint to the victorious local residents who campaigned to have this pub restored to their neighborhood -- hopefully sometime soon!

I checked on the Carlton Tuesday morning on my way to work because I had to go to the nearby Kilburn Post Office. I had a package to pick up: 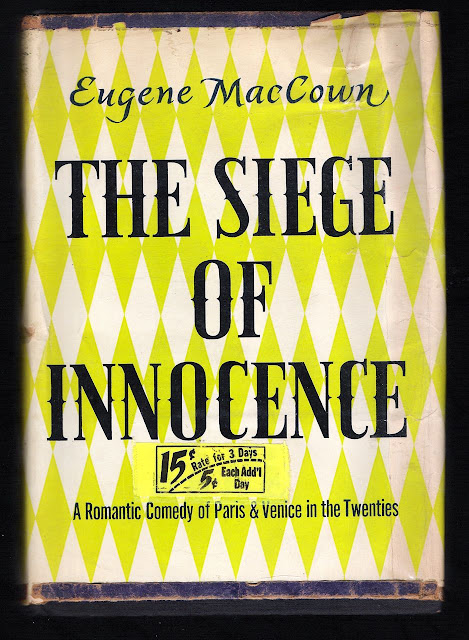 Those of you who follow Vivian Swift's blog may recognize this old book. Vivian wrote about it a couple of weeks ago. She works in a used book shop on Long Island, N.Y., connected to her local library, and came across this volume among some of her donations. The author was a painter, pianist and man-about-town in the Paris of the '20s, where he circulated among Gertrude Stein and her crowd and apparently broke the hearts of many men.

He was described by one as an "exemplary incarnation of these American angels" who fascinate some members of that circle. (MacCown was originally from Missouri. I'm often impressed by Bohemian types who pulled themselves out of Middle America in an earlier, culturally oppressive time and found freedom across the ocean.) "His amorous gifts, no less than his cruel frivolity, seem to merge into a magnetism of which they have been the beneficiaries as much as the martyrs."

Anyway, after Vivian blogged about it, I sent her a message saying, "I want that book!" I offered to buy it but Vivian very kindly sent it to me gratis. I fully intend to read it and I'll let you know what it's like. Reviewers in 1950 were not charmed. According to the Saturday Review, the main character is "the dullest young man who ever walked dry-shod through a slough of assorted and fancy sins." In the St. Petersburg Times, a reviewer wrote, "Sometimes I feel the 'Lost Generation' of the 1920s was well lost, and that none of the expatriates should have been repatriated."

I'm especially intrigued by the "15 cents for three days" sticker on the book's front cover -- apparently it was part of a paid lending library at some point. Peculiar!
Posted by Steve Reed at 6:55 AM

While the rebuilding of the Carlton Tavern is to be commended it is such a sober sides building compared with those Miami buildings in your photo archives.
I noted that the proprietor of the photo processing shop recognised you, had your negatives and didn't say we've never done that type of work. lol.
Alphie

I love the story of the rebuilding of "The Carlton". It is one in the eye for greedy developers who think that they can get away with anything and will sometimes try to ignore the rules. However, it is surprising that there were no Miami Beach photos today.

I do hope they reinstall the tile work on The Carlton. I can't wait for pictures when it's all done, inside and out.
That was sweet of Vivian to send you that book. I bet you'll enjoy it.

I'm glad the owner was forced to rebuild it but how is that really possible when it's been turned into a pile of rubble? it's the new 'old' Carleton. in this case permission didn't come and neither did forgiveness.

So this is a some good and some bad post. It seems like the pub will be back and that you have found an interesting story that has some problems.

It makes me happy to know that even in the 1950s people were tired of hearing about the Lost Generation. We just got in a donation that included a nice book of Atet's photos of Paris from the 1920s (Hemingway's hey day) and ye gods, Paris was a DUMP back then.

I wish MacCown had had the liberty to write his memoirs instead of a roman a clef. Good for him that he left the MidWest behind and became a hedonist in France. Sounds like fun. I hope the book isn't too boring.

I'll be looking forward to hearing about the drinks at the pub and about the book. The pub building is looking good. I hope it retains its old charm.

So good to see that tavern being rebuilt. That's what all selfish owners should be compelled to do.
Sounds like an interesting book, although the Saturday Review Post makes me wonder. I'm looking forward to your review.

Hooray for the citizens who led the fight to have that tavern building rebuilt. It's looking good.

But I'm glad the pub is rising again. That'll larn those developers who don't listen!

glad to see the rebuilding in progress...a good example to others

Have you been in touch with Vivian recently? I am concerned that her blog is down. I miss her.