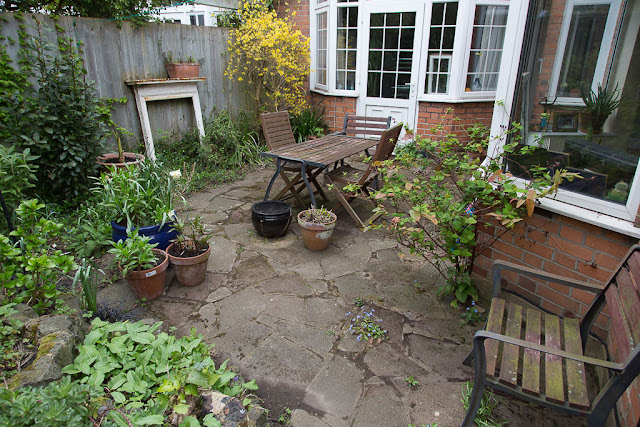 There are suddenly about a million things to do in the garden, mostly repotting plants or putting them in the ground. It seems like everything we own is pot-bound. Yesterday I repotted our geraniums, a coreopsis, and my largest dahlia seedling, and I discarded all the seed trays where nothing ever grew. There's more to do today.

I also went on a campaign to clean our patio. I scraped and swept up a big bucket full of moss, leaves, weeds, pebbles and dirt -- above is the finished product.

See that bush to the right? It's a Hypericum, or St. John's Wort, and it's growing in the crack between the edge of the patio and the house. I know I should remove it. I'm sure it's not good for the stone and the brick. But it has amazing yellow flowers and bees love it, so it can stay for now.

I did remove the inula that was growing between the patio stones. Dave and I left it all last year, but it was in a terrible place -- right in the middle of the walkway by the back door. I had planned to move it after it went dormant, but that turned out to be impossible, at least not without tearing up the patio -- it was so deeply and firmly wedged between the stones. So it had to go. I just cut it off as deeply as I could. I don't think it will come back, but I could be wrong. 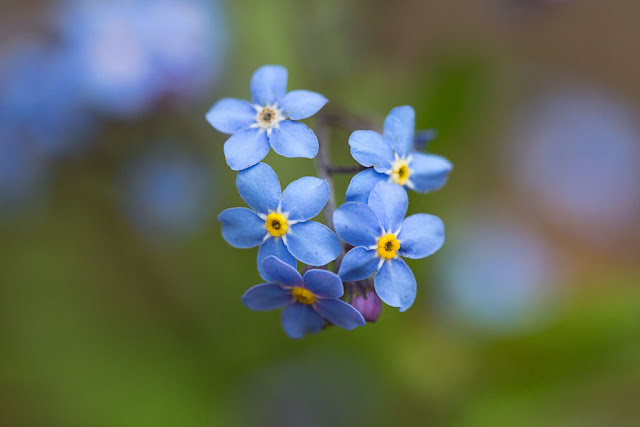 I left the forget-me-nots. They don't do any harm and they're so pretty at this time of year. For some reason we don't have as many as usual out in the garden -- they're around the patio stones instead! 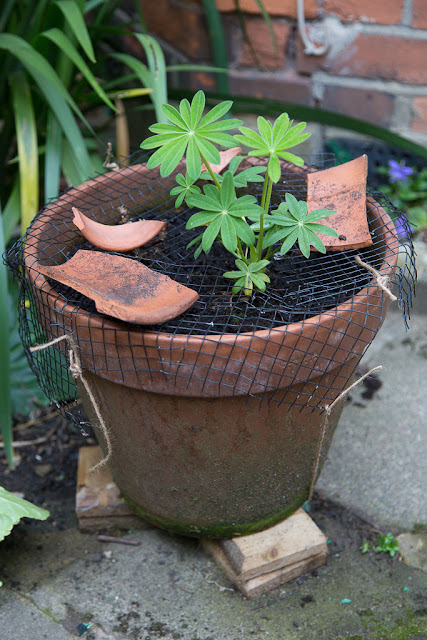 I potted up our surviving lupine and rigged a squirrel-deterring cage over the pot. We'll see if that fends off the furry intruders. 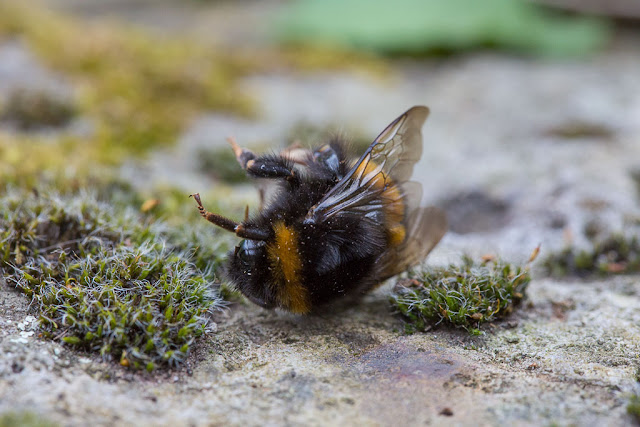 I found this apparently dead bumblebee beneath our back door sill. Bees overwinter by digging into the soil, and I don't know whether this one was hibernating or what -- I don't know enough about bees to determine what kind it is (queen or worker). But it definitely appeared dead. I tucked it into a niche in our garden wall, just in case.

I took Olga to the vet to get her shots updated. Apparently they were due in December, so because we're several months late the vet is giving her two courses. We have to go back for the second ones in a few weeks. Olga also has a discolored canine tooth that appears to have been injured, probably by all her stick- and Kong-chewing -- the vet said a root canal is an option (!) but that just seems crazy to me. I told her we'd wait and see whether Olga exhibits any signs of discomfort. She doesn't seem at all bothered by it now. Later, I took her on a walk. She was doing her best to get at the squirrels in that tree. 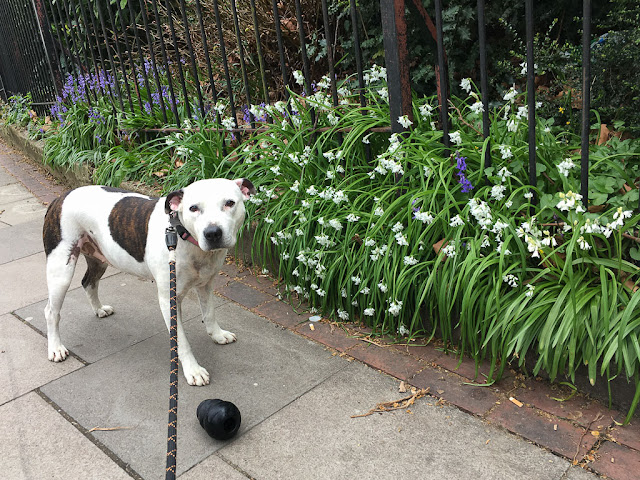 Here she is with some bluebells on the way home. She looks a bit glum, doesn't she? Probably wanted a longer walk.

I had a very sensible dinner last night -- black beans and rice, with tomatoes and hot sauce. I still haven't tackled the hearts of palm, and Dave comes back today, so those may wait until his next trip!

I've temporarily changed my evening cocktail from a gin & tonic to a rum & tonic, which sounds terrible -- but I got the idea online and it's surprisingly not so bad. I don't even like rum, but for some reason Dave and I have had three bottles of rum in our liquor cabinet for years now, and two of them were down to about a quarter of a bottle. (I think we found them that way in our Notting Hill apartment when we moved in -- left behind by our previous landlords.) Anyway, I figured I'd finish those off (over a period of weeks!) so we could get rid of those old bottles. One down, one to go. We'll keep the third one for incidental recipe and/or party use in the future!
Posted by Steve Reed at 7:54 AM

I love the way plants put themselves where you don't want them. I have always wanted the blue flower plant that grown out of the walls everywhere. I tried to get it to grow in my wall without success but it seems to seed itself everywhere else.
Just the thought of rum makes me feel sick, it's so sort of rich. I like a gin and tonic, that's my fav.
Briony
x

SAMUEL SQUIRREL (Laughing) Hey, Sheila, look what the crazy American has done to the lupin plant!
SHEILA SQUIRREL Oh I just love lupin. It's delicious. Does he really think that he can deter us with netting and broken pots?
SAMUEL SQUIRREL It's laughable isn't it! He must think that squirrels are dumb animals.
SHEILA SQUIRREL As my old ma always said - If you want something badly enough, you can get it and tomorrow I plan to have a nice lupin salad!

Rum and tonic is delicious! With lime. Yes.
I think you should leave the St. John's Wort. Look at those blooms!
Beautiful garden. I know it makes you happy.
That photo of Olga standing on the gravestone is hilarious. I love it.

there's always something to find and do in a garden.

Oh wow you remind me that I need to plant some Forget-Me-Not and Sweet William flowers for my dad. I do it every year, and it's getting to be time. It's been a ritual for 27 years now. I love spring and all the buds, that promise of beauty to come.

I like your garden than those insanely manicured ones you see around castles and manor houses. I can imagine Holmes and Watson in this one, if Holmes had ever gone outside for pleasure. Oh, that's right, he did keep bees, didn't he?

now you know what I've been doing for the past two to three weeks. great job on the patio and definitely leave the forget me nots. and the St. John's Wort. I doubt it will do any damage to the patio or house.

The garden patio looks very nice. It looks like a pleasant place to relax in the evening when it's warm enough. Olga looks so cute trying to climb that headstone to get at the squirrels. And, speaking of squirrels, I hope that protection you have rigged works. It looks like it should.

Ah, poor Olga. I hope her tooth is okay long-term.

I love that photo of her trying to get the squirrel. When you first see the photo, the foreground stands out but then Olga comes into focus and it's just too funny.

Your garden looks great! The work pays off :)

Your garden area looks nice and private a nice place for tea in the morning no doubt.
I enjoy your daily walks and getting so see more of London and wherever you go Olga steals the show she knows how to have fun. Oh do keep the St Johns Wort as bees love it.

Your patio area is just beautiful and I love all those big windows looking out over it. That's a great picture of Olga standing on the grave going after the squirrels. I didn't see her at first, either, and then got a good laugh. How does she do with going to the vet? Most of ours are very nervous and I really dread it.

That memorial with the jug of flowers in the cupboard certainly stands apart from all the traditional headstones.
I have a feeling the first salvo will soon be fired in the Squirrel Wars. You may have to call in reinforcements in the form of chicken wire, to stave off the enemy until the plants are well established.
Maybe there's a manual somewhere for squirrel proofing a garden :-)
Alphie