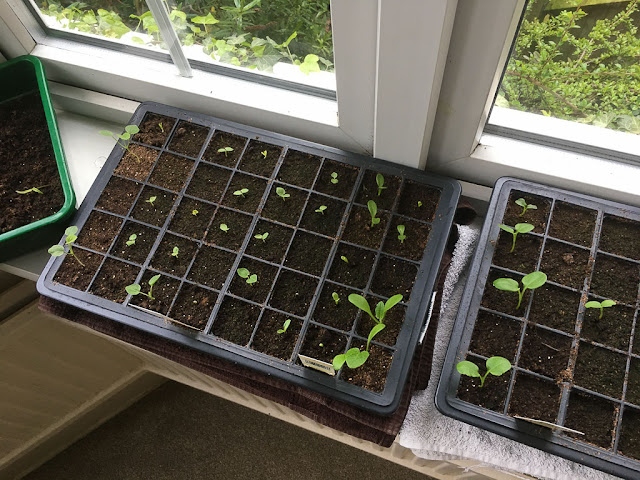 We've had some good and bad happen in the garden this year. I already mentioned my sluggish seed trays, several of which didn't sprout anything at all. I think this was primarily due to old or dead seeds, but I also wonder about the seed compost. It seems very dense, and maybe it's too dense for the seedlings? It is commercial seed compost, though, so it's supposedly specially made for this kind of thing. Who knows.

Above are our most productive seed trays, with honesty on the right, burdock in the right two columns of the middle tray and hollyhocks everywhere else. I also had two more dahlias sprout, and I've had one cosmos so far (far left, in the green tray). I'm hoping at least a few more of the cosmos seeds come up. 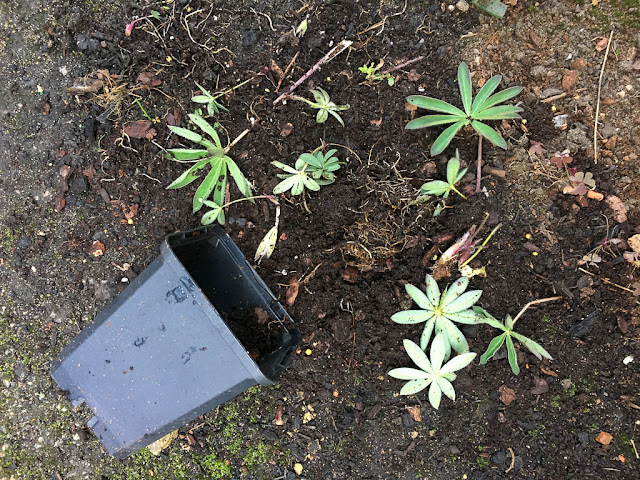 Dave and I bought two new lupines, a yellow one and a red one. We put them out on the patio table, and within 24 hours, the red one was completely demolished by a squirrel. It's almost amusing how thoroughly a squirrel can destroy a plant.

I brought the yellow one back inside. When I pot it and set it out again, I'll have to put it under some kind of wire screen, at least until it gets established. Sigh. 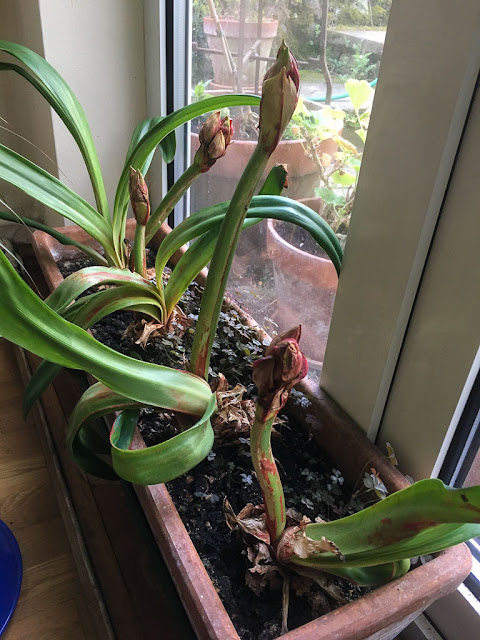 Our amaryllis are looking terrible this year. You may remember a couple of years ago they were afflicted with a fungus called red blotch. I treated them and last year they looked great. I thought we were done with that problem, but no -- the fungus is back with a vengeance. I guess I need to treat them every year. Anyway, we may not get any flowers this year, and even the leaves look pretty awful.

Some people say you should just throw them out when they get red blotch, but I hate to do that.

Dave is taking a group of students to Europe today for some performances. I'll be flying solo here at home (well, with Olga, so not completely solo) until Sunday evening. As I told someone at work, this is my time to watch all the old movies that Dave doesn't want to see!
Posted by Steve Reed at 8:11 AM

May I humbly suggest that when you do plant out the lupins you tether Olga outside right next to them. Then when Mr Squirrel arrives he'll get a nasty shock. Olga may need a kennel too. You could easily build one yourself using materials found on your dog walks.

Gardening is such a trial. We had an allotment for years and quite honestly if I hadn't just loved being there messing about with the earth and such I would have given up. We really didn't get that much produce from it and it was a continual fight with the bugs and creatures.
The seedlings all look healthy, be patient and I think they will come through.
Briony
x

It has occurred to me that I'm not seeing many squirrels here lately. What's up with that? I will investigate. Maybe they're all busy raising their babies.
So what movies are you going to watch? Also, are you going to clean out the cabinets again? Please don't eat anything too weird. It worries me when you do that.

you'll get flowers, obviously, but they may be deformed. perhaps you need to throw out that dirt and repot them. my red ones in the ground are opening. last year was the first time they bloomed after I moved them from the city house years ago. squirrels can be so destructive. they're digging around in my pots too but so far not destroying anything.

Check on the plant mixes. I think they might have a few different mixes for different plants.

That squirrel damage is amazing. I guess I never really thought of squirrels as plant diggers. I usually see them as thieves of the bird feeders.

You remind me that we don't really see many squirrels here at all and I'm not sure why that is. Mmm... but we do have skunks, gophers, and moles. The wild critters love our domestic gardening. It makes life so easy for them.

But you have some good seedlings there!

Our amaryllis are asleep, gaga, maybe dead, certainly on strike, each pot just produced one miserable, weak leaf and that's it. FFS! The first time in decades of amaryllis. I am ready to dumpt them in the compost.

We've got about another month before we begin planting. Our mint plant and Italian parsley seem to have somehow survived the winter and months of neglect.

Even when you're expecting there might be problems with seeds, it's disheartening to have failures. But what you have sprouted do look healthy, as others have said.

To help ease your heartache and heartbreak, here's a picture :)
https://www.smithsonianmag.com/photocontest/detail/natural-world/red-squirrel-split-between-flowers/

Hello Steve I am having a similar experience with my seeds - very slow germination but they are starting to appear so I have decided to persevere. It is still early in the year with cold spells and light levels are only just improving. My old allotment guru taught me that to become a gardener takes patience there will be successes and losses. Sorry about the lupins hope you can save them I could never grow them. Hope you and Olga have a great time together x

I also think you need to get new soil. It may still have some bad fungi or disease in it. Then treat the plant again with whatever disease remedy solution you have.
Also, some seeds can be temper-mental. Cosmos, Zinnias and Hollyhocks usually grow easy if you just sprinkle them right on the soil and put a little soil over them. (if it's not too cold at night where you are.) I have Hollyhocks that reseed all by themselves & foxgloves.(I am in Connecticut, USA). However, I have tried many years to grow delphiniums - I LOVE the tall blue spikes! But I was told it is generally too humid here in the summer. I have spent time & money, but they do not come back.
I say, try some other seeds too. See what happens.
Squirrels are my enemy! I have to lay chicken wire flat on the ground around all my plants and in the large flower pots- otherwise they did everything up.
Good luck - Mary

YP: It IS ironic that we have a squirrel-killing dog (well, in her mind, anyway) and we are so tormented by squirrels. I really do wish we had a dog door. But any door big enough to accommodate Olga would also accommodate most burglars.

Briony: Well, I'm glad to hear you say that, because sometimes I feel like our garden is cursed. I watch Monty Don on "Gardener's World" growing all kinds of incredible things, supposedly organically, and in our garden the very same plants get devoured.

Ms Moon: I wonder if all the tree-clearing activity around your house has scared them off? Don't worry about my weird food. I don't have anything dangerous lying around!

Ellen: Well, we have buds, but I don't think they'll open. A couple of years ago when this red blotch problem first surfaced, the buds came up on stalks but then dried up and died. It looks to me like we may only get one good stalk this year, if that.

Red: The seedling mix is supposedly for anything. But who knows?

Sharon: I KNOW! The whole time I lived in Florida I never had potted plants ravaged by squirrels. Here, they're insane!

Robin: Gophers can be pretty destructive, can't they? But then again, it's just nature. We're the ones trying to exert all the control!

Sabine: Strange! I wonder if there's something about this winter -- lack of good light or something -- that weakened them?

Catalyst: Once mint gets going, it's pretty durable!

Jenny-O: Love the red squirrel! Ha! Red squirrels in Britain have been all but driven out by the imported North American gray squirrel.

Jomo: I'm glad to hear someone else is experiencing slow seed germination. Some of mine are still just appearing, almost a month after I planted them!

MGM: Yeah, I do need to lift those amaryllis bulbs this fall and replant them next year. I think I'll do that and also treat them each year for fungus. Maybe I've planted those cosmos too deep? The package said a quarter-inch, and I may have been a bit deeper than that, but not much. We planted a delphinium one year but the slugs made quick work of it. The chicken wire is a good idea -- I've been putting wire over the top of the pots but of course that looks terrible -- I never thought to put it at ground level.