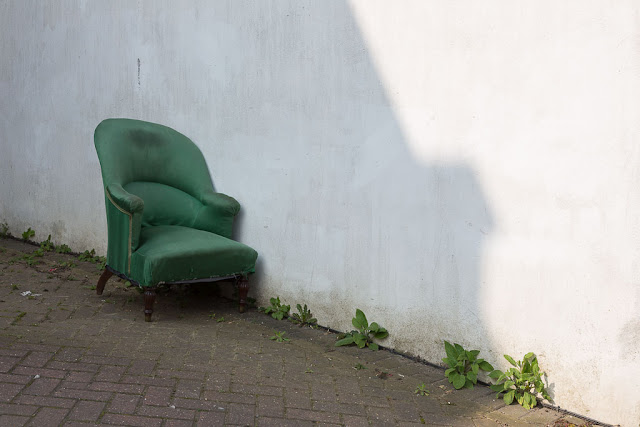 At the risk of sounding like Andy Rooney, have you ever thought about pipe cleaners? Specifically, does anyone ever actually clean pipes with them? I think of them mostly as a material for kids' projects and maybe crafting. Offhand, I can't think of another item that states its purpose in its name, and yet has outgrown that purpose and turned into something else entirely.

And that's my random thought for the day.

Our landlord's managing agent sent around an inspector to visit the apartment Thursday evening, in preparation for our lease renewal (which isn't for another three months). He came in and made a cursory tour of the place, taking pictures with his iPad. I wish I'd cleaned the bathtub first, but oh well. He said we need caulking around the kitchen sink and I showed him the steps in the alley at the side of the house, which are kind of coming apart. Otherwise I think we have no maintenance issues to speak of, which is pretty amazing.

Needless to say, no deliveryman showed up last night to collect Mrs. Kravitz's package. So now I'll probably have to live with that thing in our foyer for a week while Mrs. K gallivants around wherever. (I think she's gone out of town.)

Olga, meanwhile, has a routine vet appointment this morning, to get her booster shots. We lead exciting lives around here.

Last night, in lieu of my planned ecstasy-fueled rave, I watched a documentary on Netflix called "The Miami Showband Massacre," about a bombing that killed three members of an Irish music group in the '70s during the Troubles. I'd never heard of this particular event, at least not that I remembered, and it was a fascinating (and of course tragic) story. The Troubles have always been mysterious to me as an American -- that there would be such a level of violence and hatred among people whose differences don't seem, from my outsider's perspective, to be that great. I hope we're not rekindling that tension with Brexit, given the question of the Irish border.

After my joke about ecstasy yesterday, one of my commenters asked if I've ever taken it. The answer is no. The only drug I've ever done (aside from alcohol) is pot. I might have tried ecstasy if the right circumstances arose (i.e. I was out with friends and someone had some) but I never found myself in that situation. I've never tried any kind of hallucinogen either, and always sort of wished I had. I want to read Michael Pollan's book about psychedelics, "How to Change Your Mind." Maybe then I'll take the plunge! (Probably not.)

(Photo: A discarded chair in Charlton, South London.)
Posted by Steve Reed at 6:25 AM

Hello Steve I was interested to read that you had watched the documentary regarding the Miami showband as Des McAlea was married to a friend of mine's sister. I think there is more to the story than we will ever know. I watched the documentary about Jill Dando and felt frustrated by the lack of answers she was such a beautiful person again there's more to the story.I do hope you and Olga are keeping the home fires burning please don't eat too many leftovers but get something nice in for a favourite meal together when Dave comes home. With the whole Mrs K situation you are and always will be the bigger person. Take care.

I personally have not dabbled in any kind of drugs but my Grandson on the other hand has, he lived with us for 5 years and probably tried every drug out there and we witnessed the result.Sometimes funny but mostly sad. He's over all that now and lucky not to have had any lasting effects.
It gave me an insight into this insidious thing affecting most of our young folks these days and made me less critical of them.
Briony
x

Mrs Kravitz's package probably contains thousands of pounds worth of ecstasy tablets. It is most likely a cunning plot designed to punish you for daring to put locks on your bins. When the knock on the door finally happens, it won't be a delivery driver but a police hit squad. Mrs Kravitz will be grinning behind her net curtains when she sees you being carted off.

Oh my god! What if Mr. P. is correct?
You're right about pipe cleaners. I think they even call them something else. Yep. Looked it up. "Chenille stems."
WHAT?!
Mommy, do we have any chenille stems I can play with?
Yeah. You should read that book. Wait. Have I read it or did I just listen to a lot of the interviews on NPR? And a podcast. I know I listened to a podcast with Michael Pollan about his book.
Maybe I did too many drugs. I can't remember.
Seriously though, he treats the subject with great respect and an objective and scientific mind.
I am very, very grateful that I got to do psychedelics. They opened my mind to things that I'm not sure I ever would have realized had I not done them.

Life can get boring as we age. We can skip some things that are exciting.

Coming of age in the 1960s was definitely a time of drug experimentation. But I learned very quickly that I really don't like hallucinogenics at all. One try was definitely enough for me. Wine is my drug of choice these days.

Even though I came of age in the 60's, I was very wary of drugs. I didn't want to take anything that might harm my brain. I think it was the late 70's before I even tried pot. So that is the extent of my experimentation except for maybe a valium or two that my doctor gave me in the 80's and I hated.

I did plenty of drugs, well, pot and hallucinogens. nothing involving a needle and pills (uppers and downers) either made me lose weight or put me to sleep. I might have done ecstasy once but I don't remember. been a long time since the last time I did acid. probably wouldn't do acid again but I would do psilocybin given the right place and time. and like Ms Moon it opened a whole new way of seeing.

being young in the late sixties and early seventies, LSD, mushrooms and home grown was a given, glad for it! perspective on life in general improved considerably. Back when drugs and consciences were pure and money was not involved...NOT party drugs , third eye drugs more like. The only drug that made me glad that it was illegal was opium, from Nepal, ingested in an apple orchard in Kent- I loved it too much and, if given the change, would become an addict for sure.
Your neighbor lady is such a trial. You should slip her some opium in her tea...

I never realized before what a bunch of druggies you have here, Steve. I'm strictly a juicer though I went through a period when I smoked my share of pot. Tried cocaine once with some friends but we were all so drunk I never noticed any effect from it. That's it for this dullard.

Like Sharon, I was always too protective of my brain to take anything other than alcohol, which probably did kill a few brain cells now that I think about it.

Is that the same Michael Pollan that promotes a vegan lifestyle?

And really, I was thinking the same as YP - what if there's something nasty in that package? Did you read the address to see if it looked legit? Eeek! I wouldn't do it again for her, if I were you - I'd make up some excuse or other. And I'm a pushover. If I could do it, so can you - lol

That parcel is a secret camera or at least a listening device, she is spying on you! Could you get Olga to do a sniff and a . . . well, marking?

We - as you know my man is Irish and so is my daughter and my grandchild and we have a large Irish family - have massive concerns about Northern Ireland and the fact that the Brexit tories have shown to know absolutely nothing about the Troubles and what the Good Friday Agreement means is really frightening. Brexit will be grave, seriously so, and I just hope that the EU will not abandon Ireland.

My subconscious is busy at work coming up with another item that states its purpose in its name, but has outgrown that purpose and turned into something else entirely. I'm hoping I'll wake up in the middle of the night with an answer! If so, I'll let you know.

Jomo: Wow! What a coincidence! You should check out the documentary if you haven't already -- although it may not tell you anything you don't already know. I haven't seen the Dando one.

Briony: Yeah, I suppose I should be happy I never did drugs (beyond pot). There are definitely a lot of negatives! Glad your grandson came through OK.

YP: God only knows what's in this box! Believe me, I considered that (not ecstasy, but something bad) but then I thought that was WAY too paranoid.

Ms Moon: "Chenille stems" just sounds silly. Many people who have tried psychedelics seem happy to have done so.

Red: Well, at this point, I'm fine with that! I would never want to go out clubbing and whatnot the way I did in my 20s.

Robin: Well, at least you tried. I'm with you on the wine! (Besides, you live in Northern California, so that's pretty much a requirement, right?)

Sharon: Well, you were smart to be so careful. Certainly a lot of people suffered for their experimentation, particularly if it got out of hand. I've never taken a Valium!

Ellen: Needles. Ugh. I can't imagine that. Maybe we should have a Blogger shroom party? LOL

Linda Sue: Ha! That's all I need -- getting busted for dosing my neighbors with opium.

Catalyst: Ha! You must have been pretty drunk. Or maybe you had bad coke? I've never done cocaine -- again, I've just never been around it -- and I have no desire to.

Jenny-O: Michael Pollan wrote "The Omnivore's Dilemma," which I don't THINK is necessarily vegan, but he does say we should eat sensible amounts of food, "mostly plants." The box looks harmless -- it's addressed to some shop in New York.

Sabine: Ha! If she's spying on me, she's going to be very bored. I'm sure you're concerned about Northern Ireland. It's a terrifying situation. Those who don't learn history are doomed to repeat it, as Santayana said.

Sue: If you come up with anything, definitely let me know!