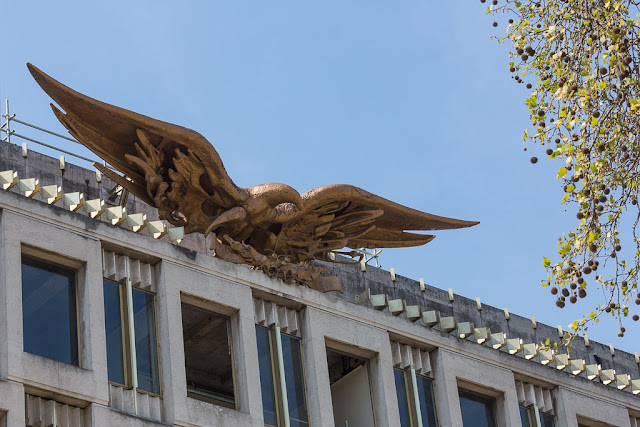 When Olga and I were in Mayfair last week, we walked past the former U.S. Embassy building on Grosvenor Square. The building was designed by acclaimed architect Eero Saarinen and opened in 1960. It served its purpose for more than 50 years, but after the African embassy bombings and 9/11, its appearance was marred by gigantic security bollards and barriers that separated it from the surrounding streets and the park.

Now the embassy has moved to a new location in Nine Elms, on the south bank of the Thames near Vauxhall, where there's more space and a much larger safety perimeter.

The Saarinen structure, which is protected by preservation laws, was sold to the Qatari government and is slated to become a fancy hotel. It's under renovation now, and once the construction walls come down it will be nice to see it with no barriers once again.

Reviews on this building were mixed, but I've always liked it -- even though it's modern and rather boxy, it has good proportions and architectural patterns that make it interesting. 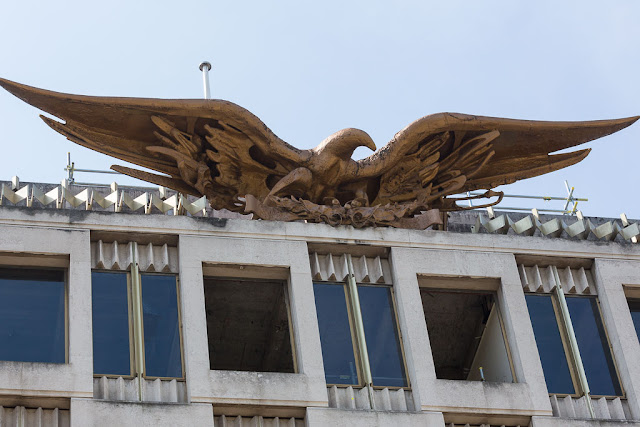 I was intrigued by the big eagle on the roof (which is part of the facade and thus has to stay put under preservation laws). Turns out it's made of aluminum and was sculpted by Theodore Roszak. Apparently the bird has been criticized for its aggressive, warlike stance -- and the diplomatic message that sends -- but it is very dynamic. 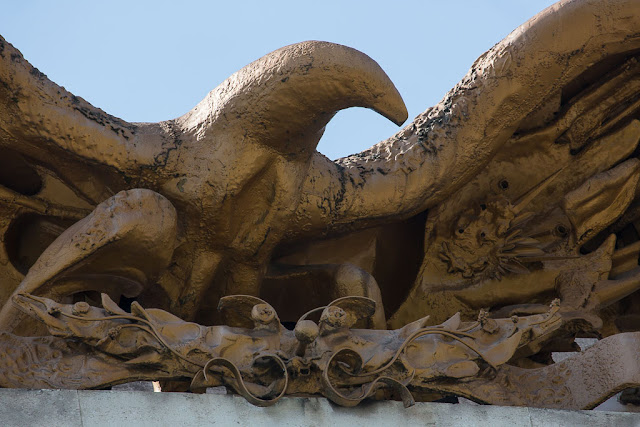 It wasn't until I trained my zoom lens on the eagle that I realized it has no face!

There's something troubling -- but weirdly appropriate at times -- about America being represented by a blind, featureless, aggressive bird, isn't there?

Incidentally, you may remember Donald Trump made a stink about the embassy's move to Nine Elms and the price we got for this old building. The conservative Daily Mail says it was indeed a bad deal, as Trump alleged, but as others have pointed out, there are pluses and minuses. We now have a new top-of-the-line, larger and more secure embassy. And there's no blind eagle on the roof!
Posted by Steve Reed at 6:25 AM

The Blind Eagles sounds like a good name for a new indy band. Dave will be on lead guitar, you will play bass. John Gray will be on drums and I will be the lead singer. We will also need three girl backing singers - Mary Moon, Vivian Swift and Jenny-O who will be required to wear spangly stage costumes and eight inch high heels. Red from Red Deer will drive the tour bus.

Your description of that ugly bird and a certain person bear a resemblance...

Excuse me, Mr. P? A backing singer?
I think not. Keep your spangly high heeled fantasies to yourself, please sir!
Steve, you're right- that eagle is just creepy without a face.
But a good story. Thanks.

spread wings makes it warlike? though I suppose with that cocked head it could be said to be cruising looking for it's next meal...if it had eyes.

If Trump kept his mouth completely shut he would cause a lot less trouble in the world. Yes , the blind eagle is very creepy.

I remember walking past here back in 2002 or 2003 and feeling a bit sad at all the fencing and security around the building. I never noticed the blind eagle. Sadly, blind and dumb fits our leadership perfectly right now. You've probably heard that he has just come to realize that the Mueller report wasn't so flattering after all. I'm sure someone had to explain it to him.

I'm ready to be a Blind Eaglette. Can we all get hair extensions so we can whip our long locks in time to John Gray's back beat?

That eagle...is the reason why people hate public art.

We've been by US embassies in Austria and Germany. Both were heavily guarded with many bollards. If you tried to get a picture, they came out and yelled at you. I would be afraid to go in there if I lost my passport. In contrast, while in Germany, embassy staff was having an event to encourage kids from other EU countries to go to school and work in Germany. We asked if we could come in and were warmly welcomed and told to make ourselves at home. Which embassy is best serving as an ambassador for the home country? It's not the US.
That eagle is just disturbing.

I wonder if the Eagles would object to a new band called the Blind Eagles. Something to think about, YP. I wouldn't wish you an extended court fight.

I hadn't thought of that Mr C. Perhaps we'll call ourselves The Blind Gophers instead. You can be our legal adviser and source our recreational drugs too - essential for creativity.

I don't mind the spangles but the eight inch heels are a deal breaker, YP, what with my poor arches and all :)

Why would an artist put all that detail into the feathers, etc. and then not put a face on the eagle? "Oh, I'm not good at eyes and beaks, I'll just stop here" - ??? I'm sure there's more to the story if we only knew!

I think the eagle kind of looks like an afterthought just plopped on the top of the building. Poor thing with no face! I agree that there must be more to the story.

I doubt that the Eagle was part of Saarinen's vision I think Sue is probably right it looks like it was added as an afterthought.

And the last word on the conjecture around the blind eagle.
According to the experts, the sculptor belonged to the Expressionism school - it's about the emotional experience...
So, I see the eagle as a depiction of strength in its over wide wingspan. The building is brutal and aggressive, more suited to a remand centre than an embassy.
The building background story isn't without humour. The deal the Duke of Westminster wanted in return for his London property was the return of his land in Florida, confiscated after the American War of Revolution.
What a cheeky chap!
Alphie

YP: Hey, why can't I wear the spangly costume and sing backup? I always wanted to do that.

Ms Moon: It IS an interesting story, isn't it? Alphie gives more detail below!

Ellen: That was apparently the perception at the time. It was erected shortly before we got involved in the quagmire of Vietnam, and the embassy was the scene of many protests -- so the eagle became symbolic of American overreach in the world.

Red: If he would just get off Twitter it would do us all a HUGE favor. But then he'd need the news media, and he doesn't want that.

Sharon: Trump's ability to distort reality as he sees fit is truly remarkable. It's a skill!

Allison: I never even tried to photograph this building when it was occupied, for just that reason. I didn't want to get yelled at! It IS a shame that embassies have become fortresses, which is counter to their purpose. Apparently in the early '60s the USA ran a public library out of this building, and it was used by many Londoners. But Congress put an end to it in the mid-'60s because of the expense.

Catalyst: Well, at least one of the Eagles is dead -- and they don't own the word, do they? I say we go for it!

Jenny-O: I'm sure he was just going for overall effect, since the bird was going to be on the roof and the details (or lack thereof) weren't going to be visible to most people.

Sue: Yeah, I wonder at what point someone decided to add it on. And I wonder how Saarinen felt about it?

Comox: I'm sure there's a record of Saarinen's response out there somewhere! He died not long after the building opened, but surely not in agitated response to that bird.

Alphie: Yeah, I read that story about the Duke of Westminster. The British only governed Florida for about five minutes in the late 1700s -- it was Spanish both before and after that, until it became a U.S. territory in the 1820s. So I think he's being a bit whiny!