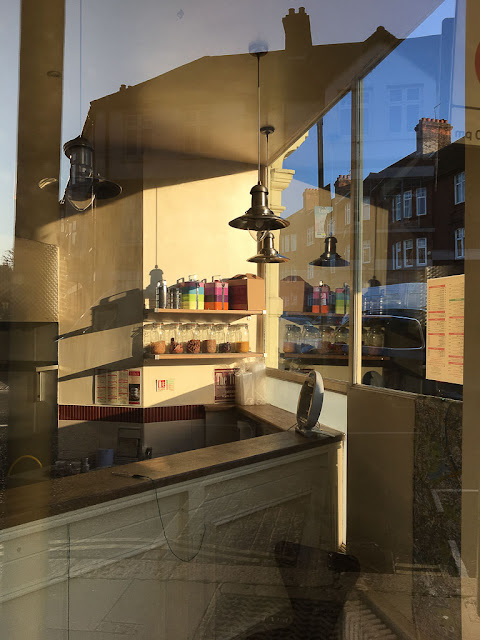 I have a slight headache this morning, a faint pressure behind the eyes, but it's all my own doing so I can't complain. I went out with some co-workers last night to "The Big Bingo Show" at the Royal Vauxhall Tavern, colloquially known as "drag queen bingo." The host, Timberlina, does drag somewhat in the vein of Conchita Wurst -- or maybe Conchita Wurst's uncle -- with a big beard. She called herself our "hirsute hostess." The bingo involved lots of lip-synched (and actually sung) pop music, some rolling around on the stage, a Cher doll and a sort of manic delivery that, especially at the end, made it very hard to keep up with all the numbers. (I'm sure my three pints of IPA had nothing to do with that.) There were three shelves of somewhat tatty prizes, one of which was a knitted loo roll cover that I coveted, but unfortunately none of us won anything.

It's been years and years since I played bingo, and we had a great time. It wasn't quite like I'm used to, with a square gridded card of numbers. This involved a sheet of paper divided into five (or six?) sections, with three lines of numbers to each section, and three rounds of play per game -- anyway, it's too complicated to explain, but it was a different style than I'd seen before. Maybe it's British bingo?

Our group didn't gather until 7:30 p.m., so I faced the eternal question of what to do between 5 (when I got off work) and our meeting time. It wasn't worth coming home (which was in the wrong direction) but it was too much time to go straight to the tavern. I wound up cooling my heels with an egg salad sandwich and a hot chocolate in a Starbucks, reading the second volume of Karl Ove Knausgaard's autobiographical "My Struggle" novel. At least I had a gift card for the Starbucks, so I didn't have to pay anything for my meager dinner!

Dave didn't come to bingo. He came home and spent the evening in his recliner with the dog. He's a homebody. Besides, he's leaving later this week with his students to perform in Europe for several days, so he wants to maximize his time chez nous.

(Photo: Early morning inside a take-away restaurant near our flat.)
Posted by Steve Reed at 6:34 AM

Sounds like British Bingo to me, though not exactly as you might find it in a regular bingo hall. Way more fun, I'd say.
What a tragedy you missed out on the knitted loo roll cover. lol.
The top photo is a top photo...
I just love that mix of reflections and light.
Alphie

No! That is not British Bingo! It's Daft London Bingo! In the rest of Britain we play bingo in the traditional manner - the same simple process you referred to. Speaking of bingo, I just leapt out of my seat and shouted "Bingo!" when I saw how you had spelt "meagre". At last - I thought - I have spotted a spelling error by The Formidable Reedotron! But then Google told me that Yanks spell the word like this - "meager". Drat!

if I didn't know you were gay coveting the 'knitted loo roll cover' would have given it away. and that would be toilet paper? is the cover for the spare roll?

Conchita is lovely!
I'd say that a little headache is a small price to pay for an evening of such fun and frivolity.
Even if you didn't get the crocheted TP cover. Or knitted. Whatever.

Staff get togethers can be brutal! You survived.

Would you believe that I spent a fun evening in the Royal Vauxhall Tavern several years ago. It was on one of my many trips to London this time with my friend David. We went to see a show that was a take on Dame Edna. I wanted to take pictures so I asked the bartender if it would be okay, he got the manager and then the manager took me back stage so I could personally ask the "star" if it was okay. Everyone said yes and I snapped a few photos (pre-digital). I'll have to see if I can find them. What a fun evening. I don't remember if I had a headache the next day but I wouldn't be surprised.

I was about to compliment you on your neat kitchen until I read that it was a restaurant. Oh, well. I had to laugh at the comment about how Dave is a homebody and the very next sentence told of his upcoming trip to Europe!

I would be DELIGHTED to make a crocheted loo roll cover for you :)

Although I would have done as Dave did, and stayed home!