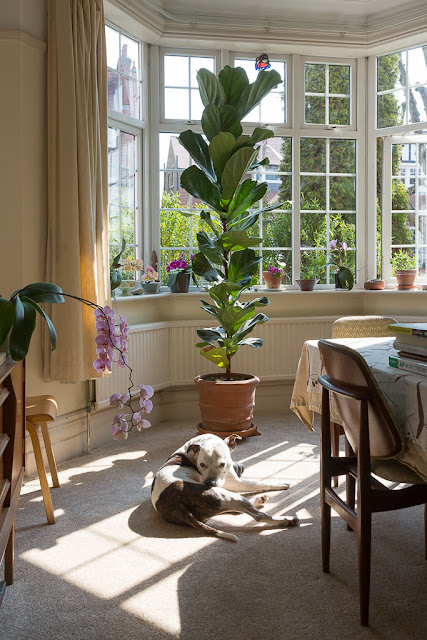 On a whim, before I'd even eaten breakfast, I started washing windows on Monday morning. I'm not sure what possessed me except I've been looking askance at them for a while, thinking it was high time they were cleaned. This is no easy task, because our flat has about a million windows, and to be honest I only did the ones in the front. But they're the hardest to reach -- I had to stand in the middle of that jungle of landscaping in the front garden, with leaves falling down my shirt and sticks stabbing me in the back.

It's also a multi-step process -- I squeegeed the outside, then cleaned them inside with paper towels, then went over the outside again to get the edges and touch up streaks.

The end result is very satisfying, though. They look terrific. Olga seems happy with them too. 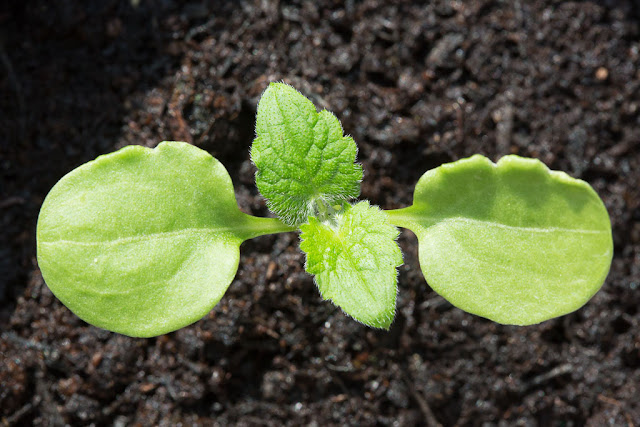 I've also been out in the garden a lot. The seedlings are coming along well. (That's an honesty, aka lunaria or money plant, seedling above.) I'm a little bit crazy about these seedlings -- I've potted many of them up individually and I'm trying to put them outside more so they'll acclimate, but I'm also scared to death that squirrels will demolish them. So I wind up shuffling the pots in and out, which is making me crazy. I suppose I need to just relinquish them to nature and not be so controlling. Some of them are going to die and that's just the way it is. 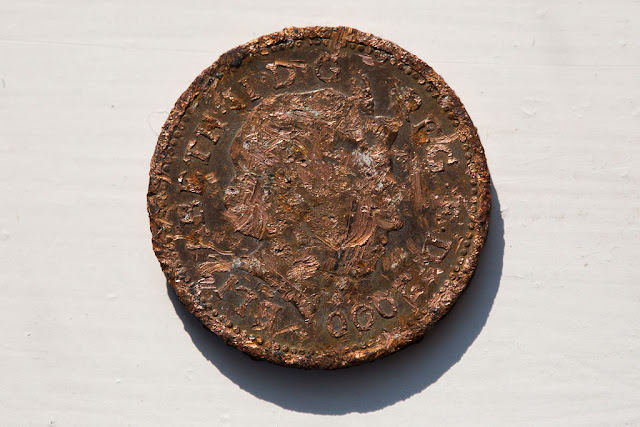 I found this penny on the street near our flat. Have you ever seen a more battered coin? The Queen has been virtually erased! I'm not sure I'll even be able to spend it -- and once the financial authorities get ahold of it, I'm sure it will be pulled from circulation. There's a fine line between a coin and a useless hunk of metal. 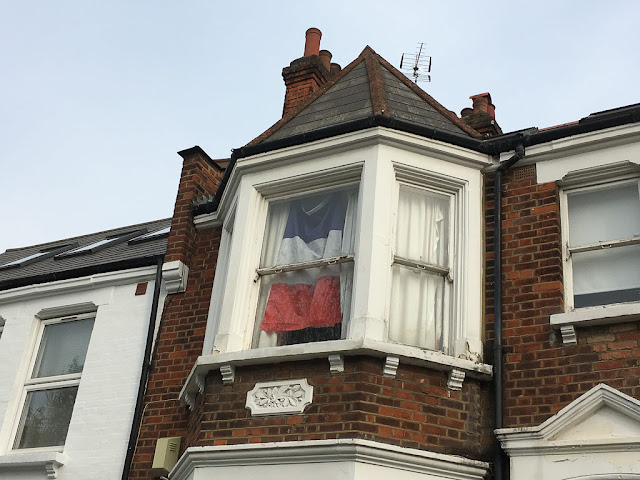 Finally, as I walked Olga yesterday morning, I saw the French flag suspended in the window of a flat on Sumatra Road. It was nice to see an expression of solidarity with France after the tragedy at Notre Dame, although this flag might have been hanging there even before that occurred -- I'm not sure.

It now looks like the damage at Notre Dame may not be as bad as we'd all feared. Despite those huge flames pouring out of the roof, the interior seems fairly intact and even the windows reportedly survived, though their strength hasn't yet been assessed. Fingers crossed that complete disaster has been averted.
Posted by Steve Reed at 7:00 AM

"I had to stand in the middle of that jungle of landscaping in the front garden, with leaves falling down my shirt and sticks stabbing me in the back"..This was like an image from The Vietnam War and you were a young G.I. quaking in your Army boots as Olga chased down the VietKong!

Notre Dame stonework may be good...but now needs a roof to stabilise it,or the flying buttresses will push he walls in.

Spring cleaning! Your windows and all the natural light look nice.

I attempted to clean all my windows last year. Only got about halfway around the house.

Your windows are looking pristine! The whole room looks so bright and new. I also love that huge orchid. That really is a battered penny.

We've been thinking about calling someone for the first time to wash the windows here. We have always done it ourselves, but it might be time. You've just inspired me to make the call.

I'd be terrified of that monstrous plant INSIDE your house. It looks like it could be carnivorous.

I should just pay someone to come and clean my windows. Can you imagine how much work it would take? Ugh. But it would make so much difference.
Your plants look so very, very happy.

I can't believe when our kids were small I cleaned all our windows myself, inside and out, every single year. Lordy. I haven't done that for years. I did get around to cleaning our big living room window, because the wind blew all the salt off the street onto it, but it got dirty again really fast and needs done again. Yours looks lovely - you did a great job. And you're right, it's really a three part job. First side, second side, first side again.

When I was 14 years old I used to do house cleaning every other week for an elderly woman in our town. She would have me wash her windows with vinegar and hot water and wipe them with balled up pieces of newspaper. I remember that my hands would be black with hard to remove newspaper ink when I was done - and I would smell vinegar for the rest of the day - but the windows came out beautifully. I just love all the windows in your home. I would love to have all that light. And your houseplants are just beautiful (as is Olga.)

The first time I cleaned my windows, I was embarrassed at how much light came in! I need to do it again --