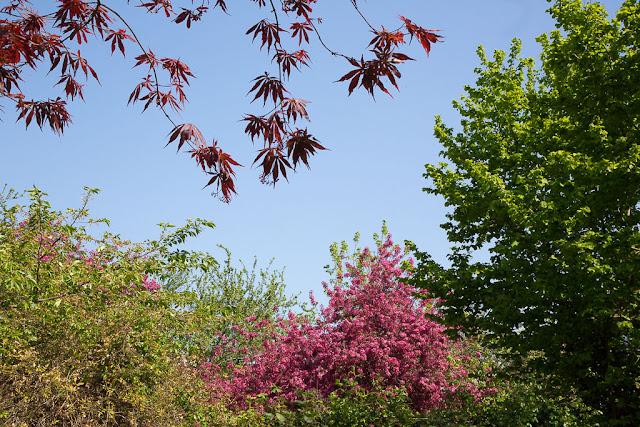 I spent virtually all of yesterday in the back garden, reading. I caught up on all my back issues of The New Yorker (yes! I read the dinosaur article!) and started the novel that Vivian sent me. So far I'm only about ten pages in, so it's too early to say if it's good, so bad that it's good, or just bad.

This was my view from our garden bench -- treetops, including the brilliant pink crabapples belonging to our neighbors. I love those trees. I think they're actually two doors down from us. They sure stand out, and they're a joy every year. 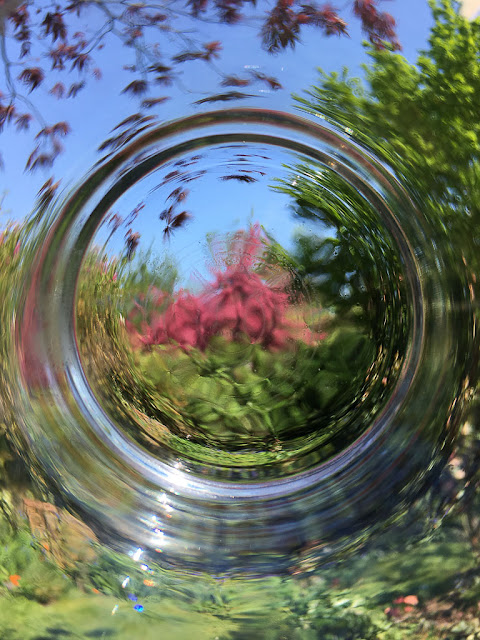 Here's the same view through the bottom of my water glass. Just for fun.

In the afternoon, having been home all day, I took Olga for a walk to the cemetery. I wanted to give her a day to take it easy, but she started getting a little squirrelly, and the cemetery's not far. I put minimal effort into the outing -- I didn't even change out of my pajama shorts and my "Honey Badger Don't Give a Sh*t" t-shirt, which I'm sure no one even understands anymore, relating as it does to a YouTube phenomenon from eight years ago. (Or maybe they do -- that video has had more than 90 million views!)

Anyway, Olga did OK at the cemetery, but she's still moving a bit slowly. I think maybe it's the heat. Our weather's not hot, exactly -- certainly not by the Florida standards of my upbringing -- but today we're supposed to hit 75º F, which is pretty warm. Olga is not a warm-weather dog.

Some of you asked about the bright blue or purple flowers in one of the pictures I posted yesterday. I did some Internet research and I believe they're called Senetti -- a special Japanese hybrid of cineraria. Supposedly they're good for plantings in early spring because they like cool temperatures.

Last night Dave met an old friend in a pub in Kensington. I decided to stay home and watch a movie that he doesn't like -- so I watched "Love Story," with Ryan O'Neal and Ali MacGraw. It is actually a fairly terrible movie, but I've seen it many times. It's like comfort food to me. I was only three or four when it came out, but I can still remember the ripple-effect on our culture because it was such a phenomenon. And weirdly, as I discovered when I read about it on IMDB afterwards, yesterday was Ryan O'Neal's 78th birthday!

It's perhaps the best example of a movie in which the most famous line -- "Love means never having to say you're sorry" -- is a complete untruth.
Posted by Steve Reed at 6:34 AM

Pajama shorts in public? Tsk, tsk, tsk, I hear the neighbours saying behind their curtained windows... On the other hand, why not give the neighbourhood a stir. And yes, I remember as a teenager going to the cinema to see Love Story. I was hoping the movie would make me both straight and romantic, but it didn't work. I fell in love with Ryan O'Neal though.

I saw this post as I was on my way to bed...Thanks for the bit about the purple flowers.

I remember going to see Love Story at the theater too. It is a pretty crappy movie but it sure did sweep the nation. And you are so correct about that famous line.

Pj shorts and a "Honey Badger Don't Give a Shit" t-shirt? Sounds like you're channeling John Gray! Hahaha.

Hope you and the family have a nice Sunday afternoon. :)

I don't think I ever saw that movie but it did as I recall shoot Ryan O'Neal to fame. as for the dog walk, the cemetery must be close by, either that or you have no shame. I can say that considering some of the clothes I walk the dog in.

I had forgotten about "Love Story" and you are so right about that line, "Love means never having to say you're sorry..." The movie came out the year I graduated from high school. Not sure why it didn't interest me, but it didn't.

I love the view of the trees. It makes me think of my youth when I would lay in the grass and look up through the trees. I started reading that dinosaur article you included a link to. It its most descriptive. I could almost feel the heat. Now I have to go back and finish the article.

Fabulous photos today nice view from your yard thanks for the link of "The Honey Badger" he's a going concern, we don't have any on Vancouver island.
Wishing you both a lovely Easter weekend which hopefully includes some chocolate Bunnies.

Pj shorts on Easter while walking in a cemetary. I got that right? If yes. Well done!

That line from love story was repeated by everyone, and I, too, thought it was complete and utter idiocy, and I was a kid. I guess my parents had managed to teach me at least that lesson, that love very often means saying you're sorry. But now you've made me want to watch that movie again. It is nostalgic.

Ha, I also have a Honey Badger T-shirt! (They must have made a billion of them.)
And I also wear as a p.j. top. Maybe I'll wear it to work tomorrow, to see if anyone gets it. My coworkers are mostly nonstarters on the 'nets, but maybe some customers?

I have seen the original youtube of Honey Badger, but I have never seen "Love Story."

I do love Ryan O'Neal in the almost unknown comedy "What's Up Doc?" (1972, dir. Peter Bogdanovich, costarring Barbra Streisand)--a sort of remake of "Bringing Up Baby", as you may know.

Honey Badger will never get old, honey, unlike never having to say you are sorry. It is still jacket weather here! I can not believe it is so warm in London. Pretty early don't you think?
Your attire in the cemetery is appropriate.

I love crabapple trees in bloom. Our neighbour had one for years and finally had to chop it down because the roots had grown into their sewage line and caused problems. I was sad to see it go but sometimes those things happen.

I could not agree more about that silly line from Love Story! I never understood it when I was younger and now that I'm older/wiser I know why :)

David: Fortunately they aren't readily identifiable as pajama shorts. They could pass for sweatpants, which I guess is basically what they are. Except short. I totally get falling for Ryan O'Neal!

E: You are welcome! Probably not good for Florida, with their preference for cool temperatures.

Ms Moon: I never saw it in the theater -- it was always TV fare for me!

Jennifer: Ha! It WAS a kind of John Gray moment!

Ellen: Actually, I think Ryan O'Neal shot to fame in "Peyton Place" on TV, didn't he? But "Love Story" certainly launched his movie career. And yes, both -- the cemetery is close, and I have no shame.

Robin: I would have thought high school girls were that movie's prime demographic! You were smart not to have been taken in.

Catalyst: She did! It's interesting, though, because she had slightly crooked teeth. Clearly she hadn't had her teeth done by that young age -- unthinkable in Hollywood today!

Sharon: It's a fascinating article -- well worth the read -- though I'm still a bit skeptical about some of the guy's conclusions. I'd like to see more of his colleagues on board with what he believes he's found.

Comox: No chocolate bunnies here, sadly. Not yet, anyway. We can probably find some on discount today!

37P: Exactly, it's definitely good for a nostalgia trip. I even read the book when I was in high school!

Fresca: Ha! That's funny! I wonder if Randall (the originator of the video) got any of the t-shirt proceeds? Probably not. "What's Up Doc?" is a FANTASTIC movie -- much better than "Love Story" could ever hope to be.

Linda Sue: Yes, it's a very warm spell, but it doesn't seem too weird. Not like when we hit 90-plus degrees one day in April a couple of years ago. THAT was weird.

Jenny-O: You wonder how many young people absorbed that line as a truth and employed it in their future relationships -- and as a result all wound up divorced!