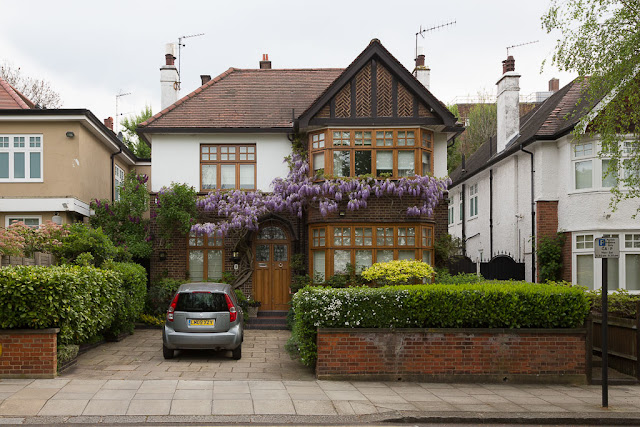 I must still be in Spring Break mode. Yesterday I was halfway to work, wearing a nice paisley shirt and some khakis and thinking I looked quite spiffy, before I realized with horror that I was wearing my dog-walking shoes! They are black (which did not match my outfit) and coated with a rime of dried mud. But I kept going. I'd gone too far to turn around. My coworkers and I had a good laugh about it, but if anyone else noticed, they didn't say anything.

The wisteria is coming out around London now. I've blogged the house above before -- on almost exactly the same day! It's on the next street over and I always think it looks so nice -- the purple blossoms combined with that beautiful natural wood trim.

For several years, Dave and I have kept an old iron fireplace surround on our patio. We found it behind the back garden shed when we moved in to this flat, and we thought it might add some visual interest to the garden. We also intended to use it as a trellis for a clematis we had at the time. But the clematis died and the white paint on the mantel gradually flaked off to reveal a sickly green shade beneath, and to top it all off, it was propped against the fence directly beneath the location of the pigeon nest. I didn't want to provide the foxes with an easy staircase to the pigeons. So we removed the mantel -- for now it's leaning against the house while we debate what to do with it. Dave has suggested throwing it out but maybe we should just put it back behind the shed, since it is technically the landlord's. 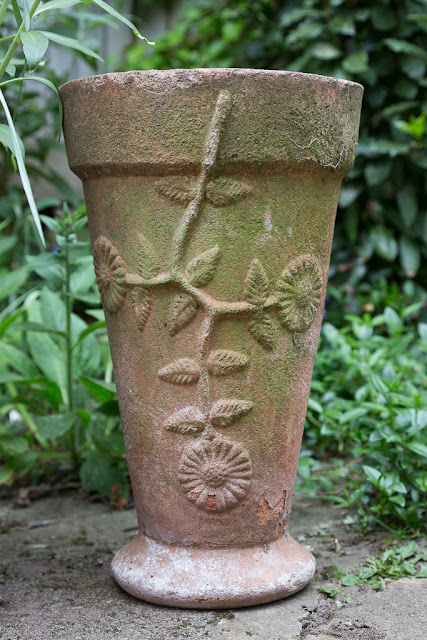 In its place, we have this new garden ornament. As I was walking the dog yesterday morning I passed the house of one of our celebrity neighbors. There was a skip in the driveway with all sorts of discarded garden stuff in it, and this pot was protruding from the front. I thought, "I can use that!" So I grabbed it. I like its weathered look, though it doesn't have a drainage hole so I'm not sure how practical it will be (probably one of the reasons it was in the skip).

Still, it will make a fun story, and I like to think our celebrity neighbor wouldn't mind, as concerned as she is with climate change and other planetary issues. Re-use is a good thing, right?
Posted by Steve Reed at 6:34 AM

The house with the wisteria is lovely. Though I wouldn't be too keen on cleaning those fiddly windows...
And the garden pot is a great find; nicely aged, like its former owner.
There are ways of getting around the pot drainage problem.
Alphie

What a gorgeous house! Although, I am not sure I would want to be the owner of the house when it is time to do some repainting or re-staining underneath all the wisteria vines. But wisteria in bloom is probably worth it! I love wisteria! And the old flowerpot is great too.

All of our pots have been discarded by neighbours. I always say to Tom that if we had a large garage I would never pass anything by, it would all be picked up and put in the garage. We have a few celebs living in our area and a lot of people with more money than sense.
We have successfully drilled holes in the bottom of clay pots before if you fancy trying it.
Briony
x

I once left the house wearing two entirely different shoes after getting dressed in the dark. That house is lovely.

Why don't you drill a hole in the base of Ms Thompson's plant pot? Now you really are one of The Flowerpot Men. Are you Bill or Ben?

I like the flower pot a lot. I like Emma Thompson even more. I was just this morning reading about er in the Daily Mail and wondering if I should get my hair cut like her's. I need to find a cut that looks good on a 63-year old, but is still kind of spiffy and I trust Emma's judgement.

You could turn that pot upside down as the base for another pot. The pattern on it suggests this to me. That might even have been its original function.
That wisteria is breath-taking.

That's a beautiful flower pot. What a grand find! How cool that Emma Thompson is your neighbor. Is she friends with Mrs. Kravitz? LOL!

That house with the wisteria is beautiful. I like everything about it! I love the flower pot and I agree it will make a great conversation piece. Oh the stories you can tell about how it arrived in your possession.

That is a beautiful pot, good eye. It deserves to be rescued. You can put large stones in the bottom to help with drainage if you decide to use it as a planter. And that house is just perfectly manicured in a quaint English way. I enjoy your use of new English terms like "the skip."

What a beautiful house with the wisteria glad you rescued the flower pot from the skip it has lots of possibilities, you could put stones in the bottom for drainage or use it for a base like Ms Moon suggests. My husband bought home an ugly plastic Heron from a garage sale which I wasen't to happy about so I painted it black and glued it to an upside down pot and everyone thinks it's wrought iron.

Followed the link to see who your celeb neighbour is.
I admire her bigtime.
Kate

That first house is gorgeous. And perhaps you could drill a hole or two in the bottom of that pot.

What a cool house, wisteria is so lovely. Love the pot, it's perfect on its own.

The wisteria against the wooden trim really is lovely.

Nice flower pot! Along with the solutions mentioned, you can also use styrofoam peanuts in the bottom half of a planter for drainage and to avoid too much earth making the pot heavy. Although in this case, that might make the pot top-heavy and prone to tipping. (And I know, styrofoam peanuts are the devil's own handiwork, but it's one way to recycle them if you have any hanging around. You just have to be careful if you're dumping the earth to put more in.) I love your title today. Good blogpost titles can be hard!

I went to the funeral home to plan Pete's Mom's services wearing my bedroom slippers! We all just laughed it off. No celebrities in our neighborhood, but David Cassidy and his family rented the house across from my sister's one summer many years ago. We never caught sight of him. I do get a kick out of celebrity sightings, but they are few and far between. Saw many more when I lived in Manhattan.

Alphie: Well, windows are no fun in ANY house!

David: Yeah, I wonder how they maintain all that wood trim. It's the only house I know of in our immediate area that's not painted.

Briony: I thought of drilling but I thought it would break the pot. I'll look into it!

YP: They seem pretty interchangeable to me!

Vivian: Emma is awesome. We are definitely fans, which makes the pot all the more appealing.

Ms Moon: You know, I think you're absolutely right. It's a pedestal, not a pot. We might use it as a pot, though. We'll see!

Robin: I wonder if she knows Mrs. Kravitz? We're far enough away from ET that she's not a victim to Mrs K's whims and not-so-neighborly demands.

37P: It's funny how I've incorporated some British terms into my vocabulary without even realizing it. A "skip" really is a special thing. We don't even have them in the states, as far as I know. We have dumpsters, which are the closest equivalent, but they're not quite the same.

Comox: Good job on the heron! Sometimes it just takes a little creativity to make an ugly thing passable.

Blondi: I admire her too! She's been protesting with the Climate Change protesters in Westminster last week and this week.

Catalyst: Yeah, I'll have to look into the drilling option. (We don't have a drill, though, which might make it a challenge!) As some others have mentioned, we could always put rocks or pottery shards in the bottom to keep plants from standing in water.

Allison: It does look kind of cool just standing there with nothing in it!

Jenny-O: Peanuts! That's an interesting solution. I do have a big box of them, but I'm not sure they're styrofoam. They may be the new corn-starch peanuts, which I imagine would degrade pretty quickly in a flowerpot!

Sue: Yeah, I used to see celebs now and then in Manhattan -- Woody Allen, Judy Collins, Marlo Thomas, Gloria Steinem, Elaine May and Natasha Lyonne all come to mind. I definitely don't see as many here, but they are around. David Cassidy would have been a good sighting!