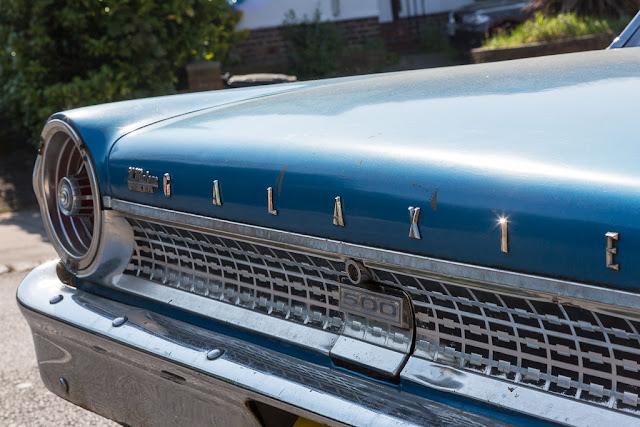 I walked another segment of the Capital Ring yesterday, from Crystal Palace to Balham in South London. I'm guessing I went six or seven miles.

The weather was spectacular. I couldn't have asked for a better day. I even felt the need to wear sunscreen!

I came across a groovy blue Ford Galaxie 500 parked on a side street -- from what I can tell online it looks like an early '60s model. And here's the weird thing... 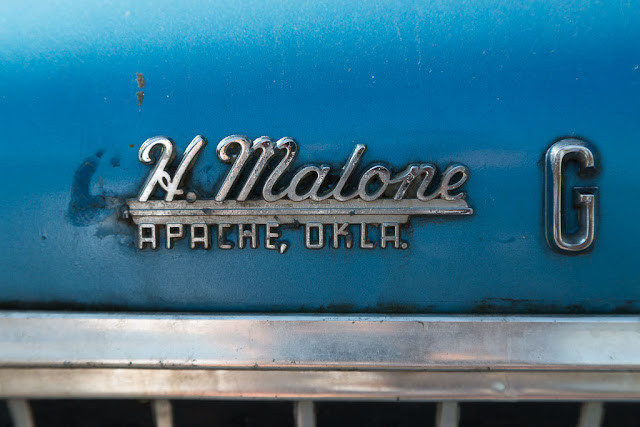 Wouldn't you love to know how a Galaxie from Oklahoma wound up in London? 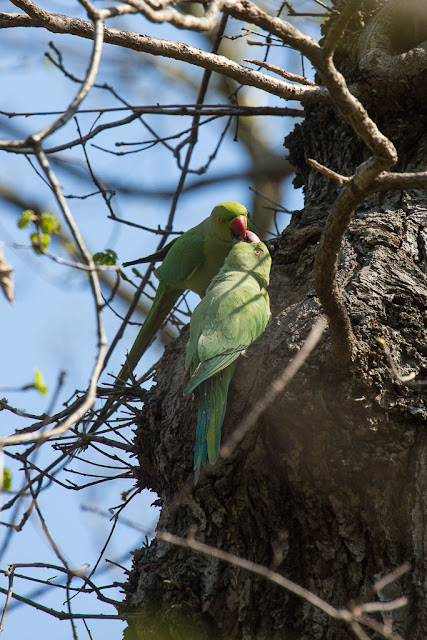 I found more squawky parakeets in Biggin Hill Wood. These two were nesting or mating or something, I think. They seemed very cozy with each other. 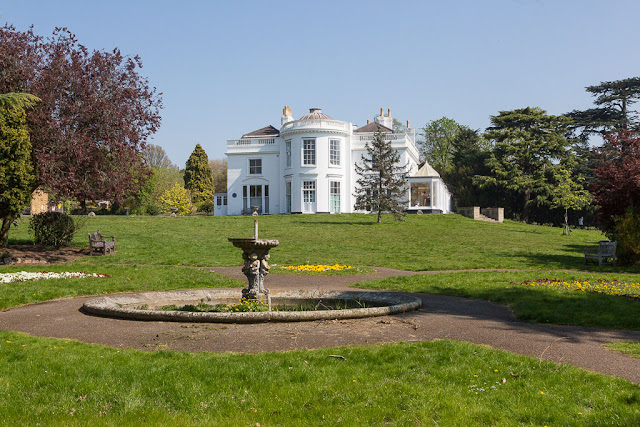 I passed Norwood Grove, a house built in the 1840s that is now owned by Croydon Council. It sits on a hill with an amazing view of the surrounding countryside. 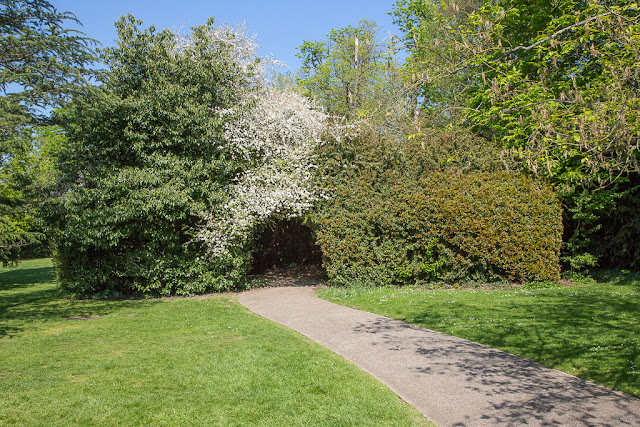 And I visited the Rookery Gardens, a formal garden built on the site of a guesthouse where Queen Victoria reportedly stayed to "take the waters" at the three springs at Streatham Spa. There were fountains and pergolas and plantings of tulips, and this arch carved into a gigantic set of shrubs. (I didn't see where that path went!) 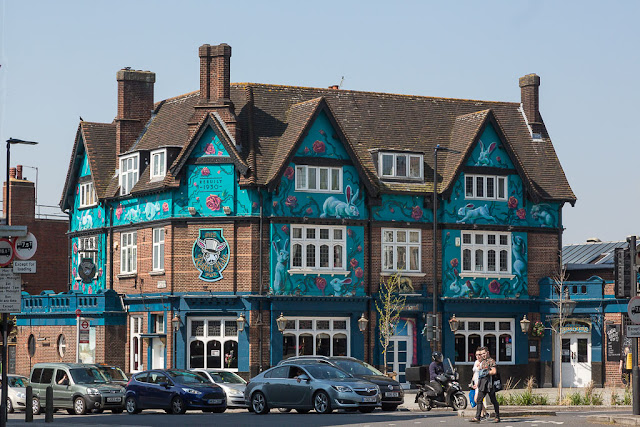 I found the grooviest, most psychedelic pub in the world in Streatham. 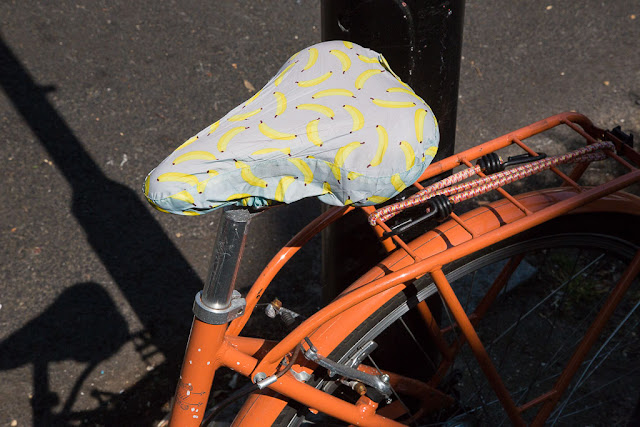 This gives a whole new meaning to the term "banana seat." 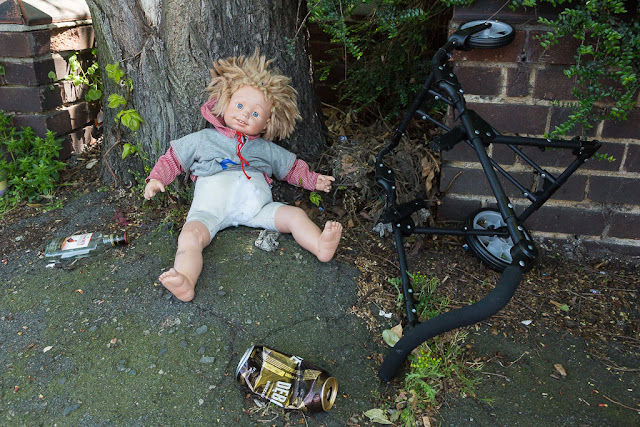 Somebody had a rough night. 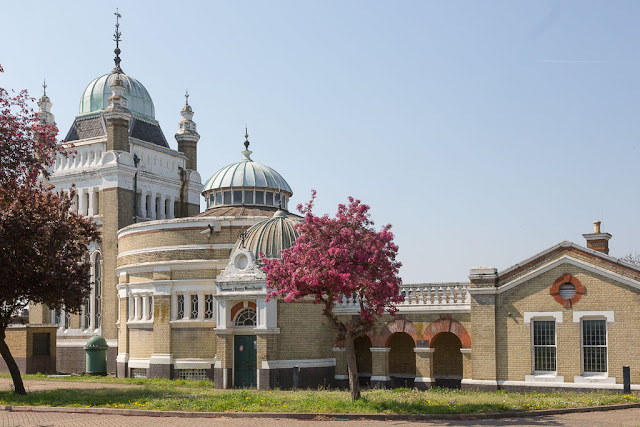 Finally, winding through the residential neighborhoods near Tooting Bec Common, I passed this amazing Moorish building. Turns out it's a water-pumping station, built in 1888! Oh for the days when our public utilities were willing and able to put so much effort into a structure!

I ended the walk in Balham, when the path crossed right near a tube station. I had to get home to help Dave get ready for a visitor last night -- his old college fraternity brother Randy, who was passing through London. (He told funny stories about introducing himself to British people by saying enthusiastically, "I'm Randy!" In England, of course, "randy" has a meaning that could be quite startling to some people.) We hung out in the back garden and went to the local pub for dinner, and he endeared himself to Olga by playing Kong with her. By the end of the evening she was resting her head on his lap, clearly smitten.
Posted by Steve Reed at 7:02 AM

A great set of photos. I love the drunken doll, and the colourful pub. We have those noisy parakeets along the river here. There was one at the top of our tree yesterday... shouting its head off. They don't usually come this far up the hill !

Great photos as always. I particularly loved the Moorish castle, aka, the pumping station! LOL

I love that pumping station. I hope the council knows what a treasure it is and will keep it in good repair. Isn't it a great sense of accomplishment to complete a section of your walk on an especially fine day?

Right; no one in the UK would name a kid Randy. In France, they think that Americans named Kevin are hilarious. What would make an American laugh? Clive? Rupert? Nigel? Yeah -- Nigel.

I would love to know that Galaxie's story. And what an outstanding color of blue it is.

I'm betting that the Galaxie belonged to a US official of some sort who had it shipped over.
Just a guess.
What a glorious day to take such a glorious walk. So much to see on that part of the Capital Ring.
That poor dolly. Someone is missing her.
Did you stop into that pub?

Brilliant how you caught the light glinting off the "i", as if it were dotting it, in "Galaxie"!

I would have had to walk the pathway through the shrubbery arch. so many great pictures...the drunken doll, the the cool pumping station, that great pub!

the Galaxie 500 were pretty fancy cars at the time. Now yes the story of it's journey would be quite interesting.

Love these photos, and I had a good laugh about "I'm Randy."

What a fun set of photos today. If only that Galaxie could talk. I'd love to know how it ended up in London. The Rabbit Hole pub is quite a place. I bet it gets pretty lively. And, that crazy looking doll made me laugh out loud. I can picture that Balham tube station as if I was standing there. Back in 2013, I stayed at an AirBnB home in Balham and I used that station every day. The tube wasn't always reliable there so sometimes I took the rail line into Victoria Station. One night on my way back to Balham, the tube broke down somewhere near Clapham and I had to take a bus to Balham. I had no idea how the bus line worked so I had to depend on strangers in the crowd to get me on and off that right bus at the right places. Fun memories!

The drunk doll, the amazing pub, Olga smitten,and the love parakeets- great love/spring theme running through your walk. Majestic house and pumping station just take my breath away, especially now that our town is building buildings to house people in the most dismal boxes at such a fast rate, overnight they appear.

Either that car feels like a king or is lonesome as the only turn pike cruiser in the nation...it yearns for open road, I am thinking.

I must agree with several of your commenters: this was one of your best collections of photos. I envy you to have the ability to do these long walks and the wonderful variety of scenery you see. Thanks, Steve.

What fantastic shots of your walk. Thank you for taking us along!

I love that pub - lookit those wabbits! Perfect for spring/Easter time!

Even here, in the Land of the Very Recent as far as most buildings go, our water pumping stations are more ornate than many other places. What's up with that??

I think you must know London and its environs far better than most natives. And now we do, too! (Sort of.)

What a glorious walk! And soul satisfying, hopefully. Love the Galaxie -- jeez, cars were sexy back then. The pub is wonderful and that pumping station is something else. The color of the Galaxie goes with the pub. Thanks for the great pics!

I love your walks, and that car! I have no idea why vintage cars catch my eye when I don't drive. It may have come over during someone's military service or been shipped to a person who restored it. Your friend was very good to Olga. Does he have a dog?

Frances: They DO make a racket, but they're pretty! We get them on our bird feeders occasionally.

David: Isn't that amazing? I love that someone put so much effort into making it beautiful.

Vivian: Why do French people think Kevin is a funny name? Is it similar to some obscene French word?

Colette: Yeah, it was a great color!

Ms Moon: I did not stop at the pub, because having a beer when I'm out walking on a hot day would probably not be the smartest thing to do, but I'd love to go there at some point!

Fresca: Good eye! That's what I liked about that shot, too!

Ellen: I'm kind of surprised I didn't, but there was a lot to see in that little garden and then I had more walking to do, so I was eager to press on!

Sharon: I remember you saying you stayed down there! That station is on the Northern Line, which in my experience is one of the least reliable tube lines. (People would probably debate me on that.)

Linda Sue: It looked a little lonely, all by itself in a sea of bland modern automobiles.

Catalyst: Thanks! There is plenty to see around here, that's for sure. There's as much to see in America, but it's less compact unless you're in a big city so it's harder to see so much while walking. Don't you think?

Jenny-O: It IS very Eastery. I didn't even think of that! You'll have to post a picture of one of your pumping stations so we can see it!

37P: A lot of Londoners tell me that when I talk about where I've been on my walks!

Joanne: You're welcome! It was a great day out.

E: I'm not a car person either, really, but when I see an unusual one I can't help but be interested. I think you're right -- it probably came over with a military person. I believe there were several American bases here in the early '60s. Yes, Randy has a dog too!

What a fun and rewarding day you had, thanks for taking us along on your journey, although I live in Canada I'm originally from Holland and Bill was always a strange name to me as it means behind or bum.

Looks like a 1963 Galaxie. Chances are pretty good that its a survivor car from the states that has more recently been sent over to the UK. The dealer badge and what looks like original paint, coupled with the lack of serious rust, would suggest a car appreciated for its patina and one that has not been in London very long. My guess.

I'm SUPER behind on reading blogs - you've written 9 posts since I last made the rounds! I was going to wait until the end to comment, but I couldn't pass this one by. I love each & every photo - but especially the pub & that doll (which looks disturbingly Chuckie-esque).