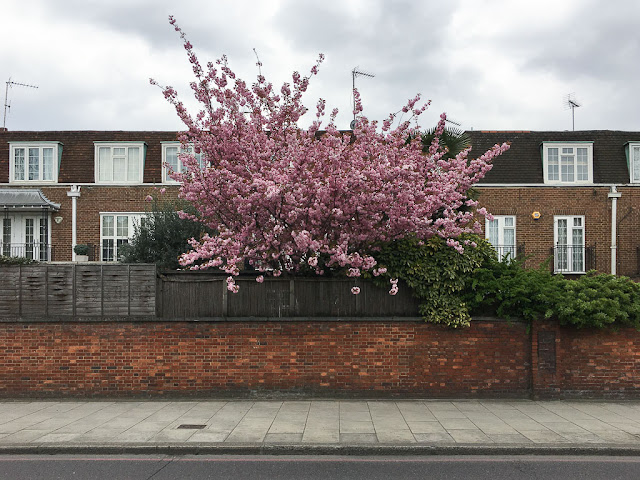 Lots of colorful things are blooming at the moment! I walked home from work last night and saw several trees like this, big fluffy clouds of pink. (This despite the fact that temperatures have been unseasonably cold -- it's 34º F out there as I write this just after 7 a.m.!) 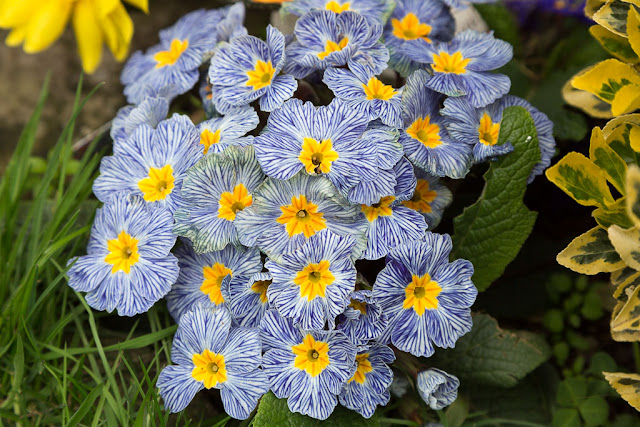 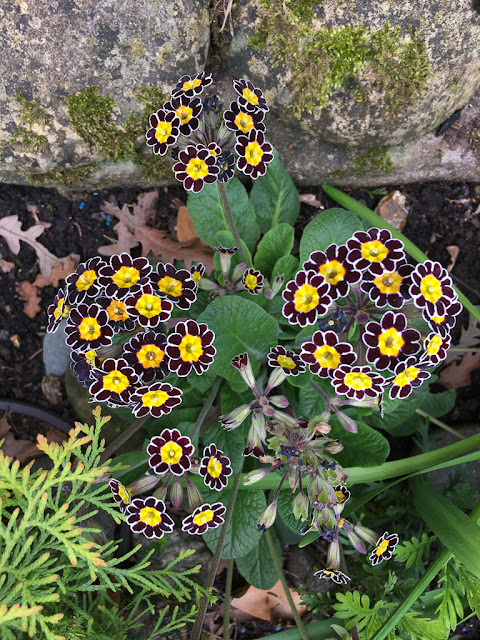 There are some unusual varieties of primroses at the cemetery... 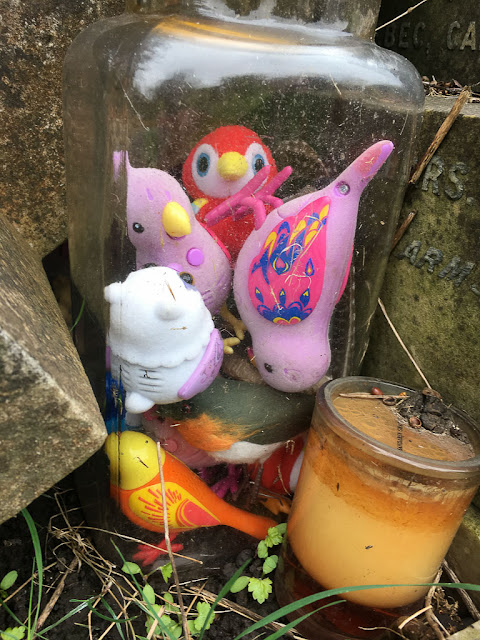 ...and speaking of the cemetery, I found these unusual decorations on one of the graves. This jar full of little birds was accompanied, on the other side of the headstone, by one containing a pink teddy bear. The odd thing is, this grave is Victorian. The occupants died in the 1880s or thereabouts, and I didn't notice any children, at least not mentioned on the headstone. (Which admittedly was hard to read because it had been broken.) I wonder who's decorating it, and why? 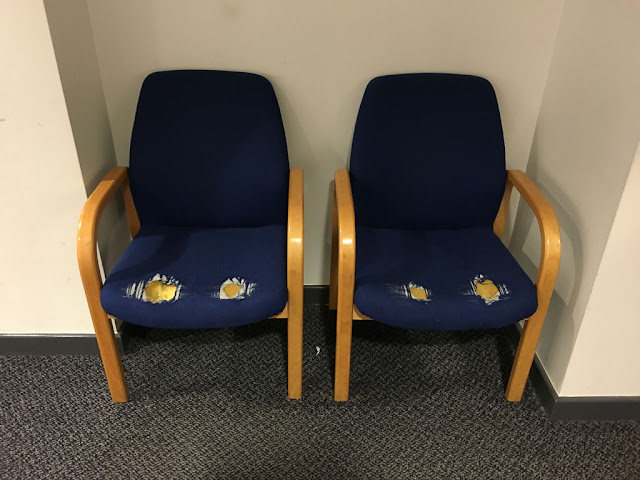 I found these pathetic chairs at the post office when I collected a package a few days ago. I feel like so many public facilities in Britain look like this. Perhaps "Austerity" is to blame. 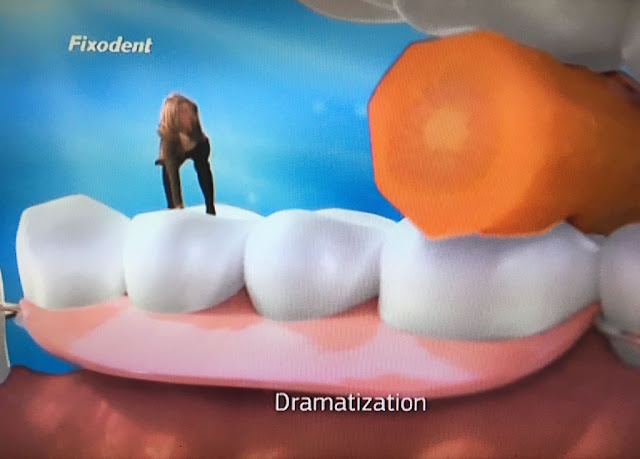 I had to take a picture of this ridiculous Fixodent advertisement on television, with a woman perilously balanced on top of a set of wobbly dentures. As I told Dave, "I'm so glad they labeled this 'dramatization.' Otherwise I'd have thought it was real!" 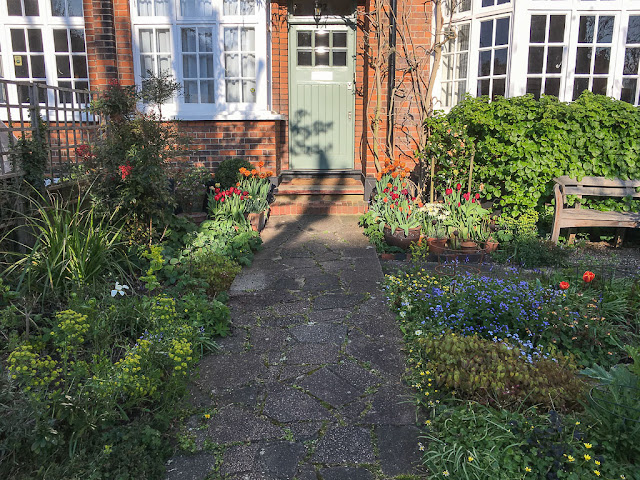 This is one of our neighbor's houses. They always have a terrific-looking front garden. I especially like all the tulips by the door. 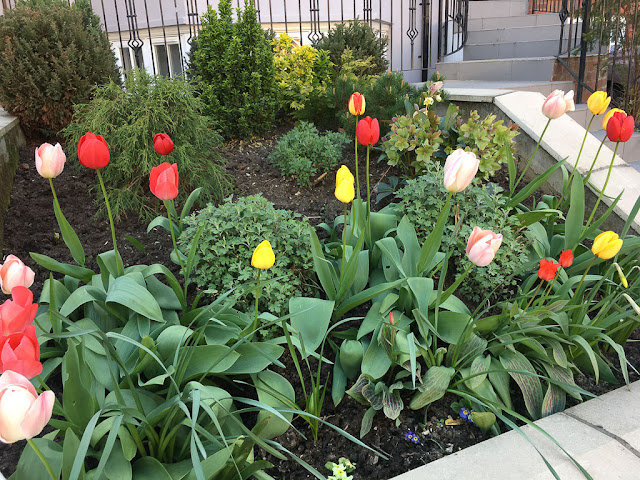 And here's another neighbor's garden. I'm jealous of the tulips -- ours didn't do much this year. We have one plant with a nascent bud that doesn't seem to be growing. Otherwise they were all nibbled by wildlife and look pretty ragged. 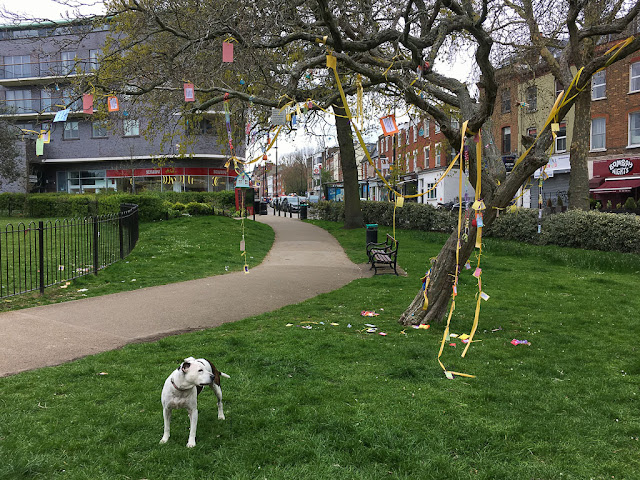 When Olga and I went to Fortune Green a week ago, we found this tree, decorated once again on behalf of Nazanin Zagari-Ratcliffe, who has been detained in Iran for three years now. 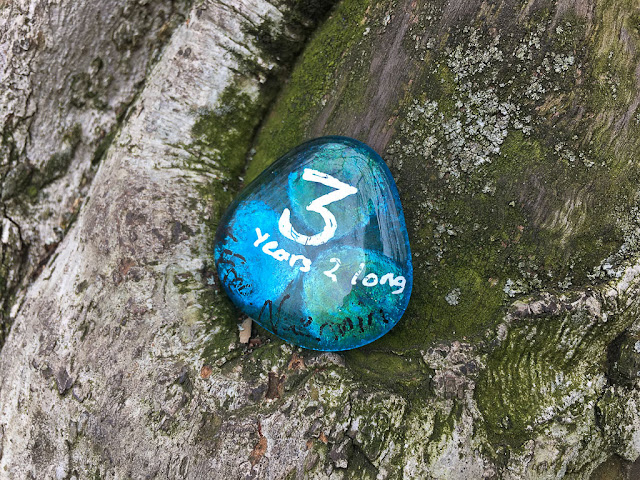 Free Nazanin, indeed!
Posted by Steve Reed at 7:38 AM

Those unusual primulas are Auriculas..much loved by the Victorians, and often shown in Auricula "theatres"..stepped shelves, with shelter from any rain to keep the petals perfect. This obviously meant that one's gardener had to keep them watered!

The sloe/blackthorn, wild cherry/gean and plum blossom is out here too, despite the cold winds. I'm hoping that its not too cold and windy for the pollenating insects.....

The chairs in the Post Office have nothing to do with Conservative Austerity: it is in fact an art installation by Tracey Emin. It is worth about a million pounds and it is called "Two's Company"... Seriously though, I think you are right. The chairs are a legitimate symbol of the decline in public services that has been happening through the past nine years of Tory rule. It is very sad and once the ground has been lost, it is very hard to retrieve it.

Great selection of photos as always! Loved the Post Office chairs - NOT! But on a different note, what post office even HAS chairs? No post office that I frequent has any chairs - only more and more displays of things to buy, mostly totally unrelated to postage, like kids toys, back vibrators, fairy lights and Mother's Day cards. (I kid you not - I was in our PO yesterday!)

I LOVE those primroses!! I was audibly gushing when I saw them - ha! We've had lots of pink fluffy trees too - spring is so lovely.

I really do wonder about that cemetery decoration. I'll bet there's a good story there.

Love all the spring photos!

I had no idea that primroses came in such startling varieties. Otherworldly.
"Dramatization."
Phew! What a relief!
Chairs in a post office? Who sits in them and why?

yeah, what's up with the chairs in the post office and what a weird way for them to wear. pretty spring pictures.

Seeing all of the tree bursting fills my heart.
Briony
x

Carrying a phone and thinking gives you lots of good photos and stories.

The flowers are so beautiful there. Love seeing springtime colors despite that crazy 34 degree temp.

Quite the array here...those post office chairs could be repaired.

Those post office chairs are very sad looking. I love all the blooms. I've never seen anything quite like those two from the cemetery. They are very beautiful. Olga looks like she's feeling concern about Nazanin's well being. The tulips in the neighbors yards are also very pretty. I've seen bunches of tulips in the floral section of the grocery stores lately.

Those flowers are beautiful and I especially like tulips.

I love primroses; I'm hoping to get some more to add to the perennial part of our garden this year. Those are stunning. I had no idea they came that way.

No chairs at all in our post offices. Is that better or worse than shabby chairs?

I love all the flowers -- we have that pink tree all over Los Angeles right now, but it's not 32 degrees!

gz: I didn't know that about Auriculas. Interesting! I saw a bee yesterday buzzing around our rosemary, so at least here we've got a few pollinators out and about.

YP: This austerity program is a nightmare. It's causing no end of suffering.

David: Ha! Well, that's a good point, actually -- I'm not sure I know of other post offices with chairs. I'm not sure why these are there!

Jennifer: I think so! I wish I could figure it out. Even if it IS a child's grave, I'm surprised someone would be decorating it 130 years later. Most of the Victorian graves at the cemetery go without decorations.

Ms Moon: Yeah, I have no idea. Someone who pulls the seats apart, apparently!

Ellen: It's a nice time of year!

Briony: I can't get enough of these trees!

Red: It IS nice to have a camera whenever we need it. Phone cameras are so convenient!

Robin: Fortunately the day warmed up a bit and I think this week the weather is supposed to continue to get warmer.

E: Oh, absolutely. It's just the foam and the fabric that's damaged. I just wish someone WOULD repair them rather than let them sit out like that.

Sharon: We should all feel concern about Nazanin's well-being. It's a shameful situation. I'm surprised it's dragged on this long.

Catalyst: Tulips are beautiful but they're finicky. We have bad luck with them here. I think we need to gather all our bulbs and put them in a pot where we can watch them and care for them more closely. Right now they're in the ground and they just get eaten or don't bloom.

Jenny-O: The good thing about primroses is they're pretty durable. We have several that came up from last year. And yes, I'm sure light has a lot to do with it, though we had a warm February and March, too.

Alphie: They do, don't they? Like a page from an artist's sketchbook.

It would be so easy to cover the seat cushions of those chairs. I wonder why someone doesn't take it on. And your neighbor's front garden looks like a storybook place, lovely.