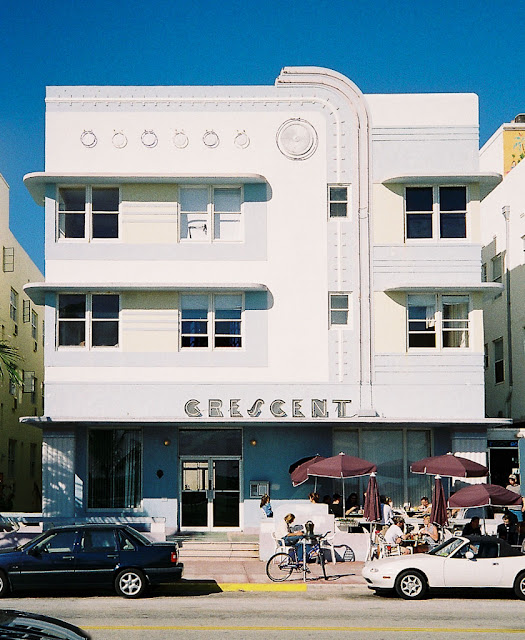 Everyone seemed to get a kick out of yesterday's photos of Miami Beach, from my trip with my friend Liz in November 1996. So here are a few more!

First the two shots (above and below) that were left off the CD when I had my film scanned on Monday. When I went back to the photo shop yesterday and said I was missing two frames, the proprietor knew right away what had happened -- apparently the last two shots on the roll were on a negative strip that was too small for her scanner, so she had to do them by hand. Somehow, she forgot to include them on the disk. But she had them in her computer so nothing had to be rescanned -- she just saved them to my memory stick and voila! 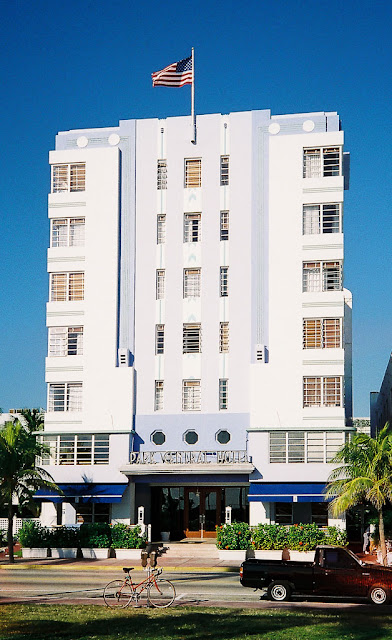 The sign above the door says Park Central Hotel, in case you can't read it. 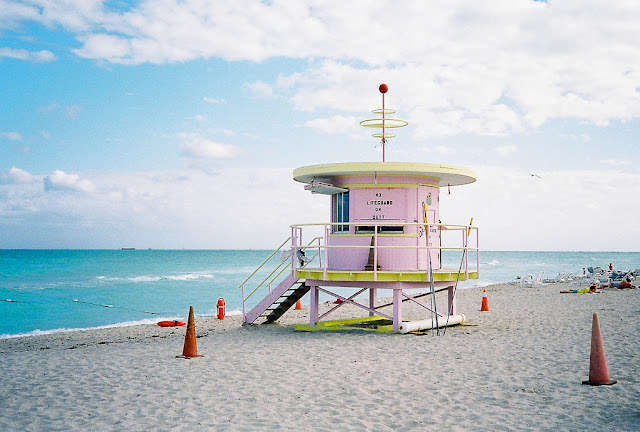 Here's another groovy lifeguard stand. It looks like a spaceship! 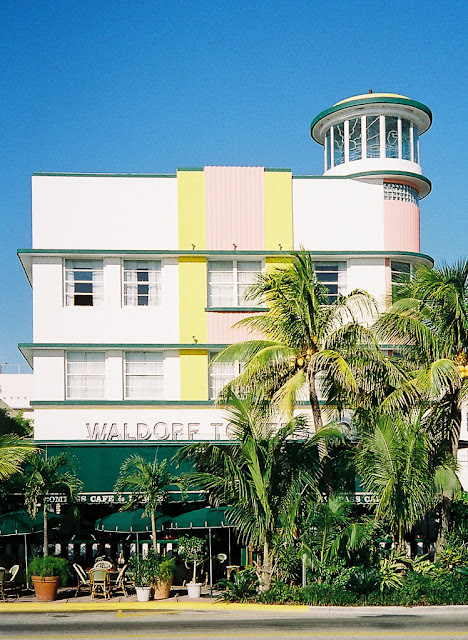 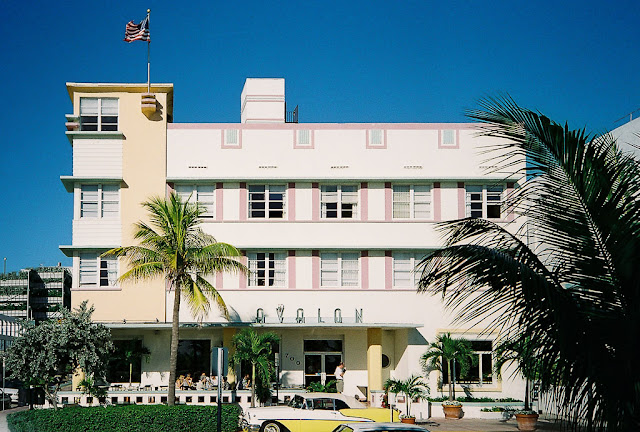 Some of these photos took a bit of processing. I shot many of them off-center and I wasn't particularly careful about street signs, parking meters or cars. I had to correct perspectives, straighten and crop almost all the shots.

In most cases I don't like cars in my street photos, but I wish I'd included more of the one above! What a great old '50s car. Funny how I just wasn't paying attention to any of that at the time.

I'm so glad to bring these pictures out into the light of day. I'll put the full set on Flickr eventually.
Posted by Steve Reed at 6:33 AM

I'm looking forward to seeing more Miami Beach pictures tomorrow and on Friday and Saturday too.

I remember being there in the eighties and early nineties, no photos though. Hannah lived there for a time.

I just love these, and yesterday's, photos. The one of the Waldorf Tower cracks me up, adorable. You definitely should hang on to this collection for posterity sake as it appears Miami Beach may disappear in the not too distant future.

I think I like the Waldorf Towers best as well, probably because of all the tropical plantings. And of course the pink and yellow strips down the front. And that crazy little observatory at top which looks as if a giant gently placed it there.

fun lifeguard stand but what's with the orange cones?

I love the light in these photos. There's something so beautiful about them all. Love that old car.

I agree with Joanne These should be hung somewhere in London , a one guy show, they are all utterly fabulous! Treasures!!

Fun Florida photos from our fabulously feisty photographer. (Sorry, I couldn't resist the alliteration.) That car in the last photo fits in beautifully with that building. I love the lifeguard station too. It does look like a spaceship. These really are great photos.

Thanks for the extra lifeguard station - very Jetson's!

The mystery car is a 1955 Oldsmobile Super 88 convertible. I'm guessing the man in the bermudas standing by the doorway who appears to be imbibing a beverage is the owner.

What a surprising look back. It's all very clean.

Ellen: I think the cones are meant to keep people away from the stand when there's no lifeguard on duty.

Frank: Wow! I'm impressed you identified that car from such a distance (especially given that it's partly cut off)!

Thanks for the comments, everybody!

Piece of cake, Steve, if you were a teenager mad about cars in the 50s. Couldn't do it with todays models. Of course I'm pretty far from being in my teens these days and it helps to have access to my friend, the internet.