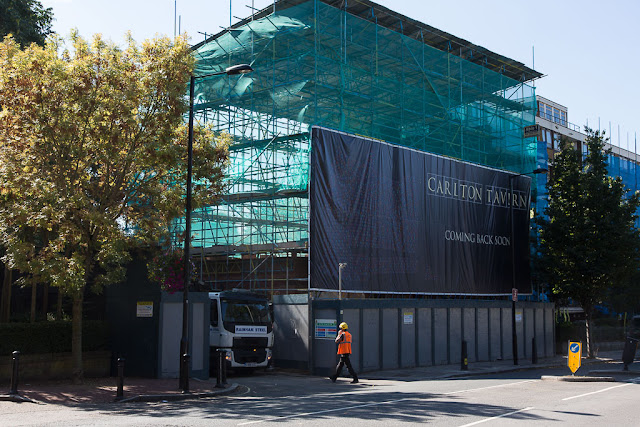 You may remember the Carlton Tavern, a historic old pub which I wrote about after it was illegally demolished in 2015; I've given updates a few times since. The short version of this dramatic story is that the foreign owners wanted to redevelop the site and were turned down by the local council, which planned to consider the pub for historic preservation. So with no warning or permission the owners brought in backhoes and knocked most of the building down.

The council said, "Oh no you don't," and ordered them to rebuild it "brick by brick." As I understand it there were some appeals and legal machinations but in the end the council order stood, and now construction is underway. 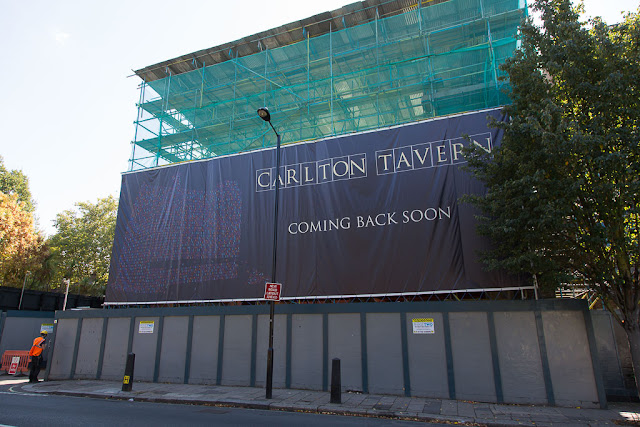 I love how there's a big banner proclaiming that it's "coming back soon," like they're doing us all a favor. (I am tempted to type curse words here but I won't.) 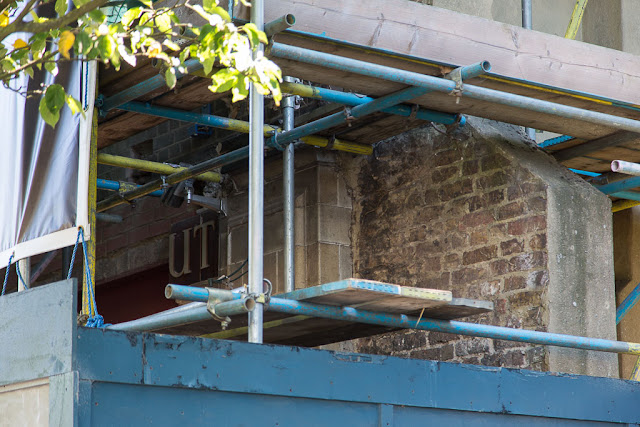 You can still see traces of the original building behind the scaffolding. It's hard to tell exactly what's going on, but it seemed to me that a new exterior wall now exists on the east side of the structure, which had been reduced entirely to rubble. It also looks like some of the distinctive lettered tiles have been removed for replacement or restoration.

This process has taken an agonizingly long time, and of course, even if it's rebuilt that won't necessarily guarantee a return of the old pub. Will the same people run it? Will they have lease terms that allow them to make a go of the business? It will almost certainly be changed in atmosphere -- even if the builders hew closely to the old structure's architecture, it will be made of new materials, which can't help but affect its charm.

Still, it's a positive outcome overall. Westminster has shown that its building rules can't be flouted with impunity, and local residents can return to some semblance of their old watering hole. If there's a grand re-opening, I'll be going!
Posted by Steve Reed at 7:18 AM

The worrying thing here is that it seems like yesterday that you did the original post, that's how time is rushing past me, lol
I thought they were closing pubs down? Sounds like the council are just being pendantic to me.
Briony
x

I hope that the developers' arrogance has cost them a hell of a lot of money. Personally, I think that whoever gave the command to demolish should have been imprisoned. As for the word "soon" in "coming back soon" - I guess it means two years.

If there are rules, there have to be consequences for breaking them. So often it doesn't happen in real life but here is an example of how it can be done.

That sign is infinitely amusing. Not just like they're doing everyone a favor but as if they're so damn proud about it!
Ha!
Yes. Please keep us updated as to how the rebuilding goes. We should all plan a big blog party there for when it is reopened. You and Dave would love to let all of us stay in your lovely home for a week or so, right?

Excellent idea Ms Moon! I am up for it.

I'm glad the council took a stand and stuck to it. It'll be good to have the pub back, but now it will stand with a new modern history.

This time the scumbags didn't win.

I hope they were seriously fined in addition to having to rebuild the old building.

Was anyone convicted and sent to prison? Should have been! I hope all those people who by now have found a new, favorite pub will be persuaded to return to this re-done establishment.

Apparently even in London there can't be enough pubs. I'd hoist a pint of bitter to that, if I had one.

I am now waiting for excellent photos from the grand re-opening. Don't forget your camera.

the rich think rules don't apply to them. they probably thought they might have to pay a fine. you know, easier to apologise than to ask permission. and no, it won't be the same place.

Briony: I don't think the council had a choice, really. If they let that demolition go unpunished, their planning laws would be useless. Every developer would just roll in and do whatever they wanted, with that precedent set. The council had to take a stand and make it stick.

YP: I agree. And what rankles me is there's no mention of the firm that did the actual demolition. Who was operating those bulldozers, and who was managing them? Why aren't they being punished?

Jenny-O: Exactly. There must be consequences.

Ms Moon: House party! Woo hoo! Seriously, I guess the owners feel like they have to put a positive face on what must otherwise be a huge, expensive humiliation.

Robin: I hope they're able to save enough of the original building that it will retain some of its older history -- but it didn't look to me like there was much left.

Red: It's nice to see justice prevail for once!

Sharon: I haven't heard about any additional fine, but I suppose having to rebuild is fine enough. That can't be inexpensive!

Peace Thyme: There's a community of people on Facebook who have been monitoring this situation and waiting for the pub's return. I don't doubt they'll go back, unless it's an utterly charmless reconstruction, which is possible.

Catalyst: Pubs are under a lot of pressure -- there are lots of them and people just don't drink as much (or as publicly) as they used to.. But this one is kind of on its own in a neighborhood with not a lot of other pub options. Cheers!

Ellen: I think that's exactly true. They thought they'd be fined and then could move ahead with their plans. That's why I'm so happy the government stuck to its guns.

That's fantastic. I remember this story. I recall when I first heard of it, I was sure the developers would somehow get around the order to rebuild. I am thrilled and impressed that the order stood! Please take us along with you to the grand opening!

It's been a busy week but now I'm all caught up here!