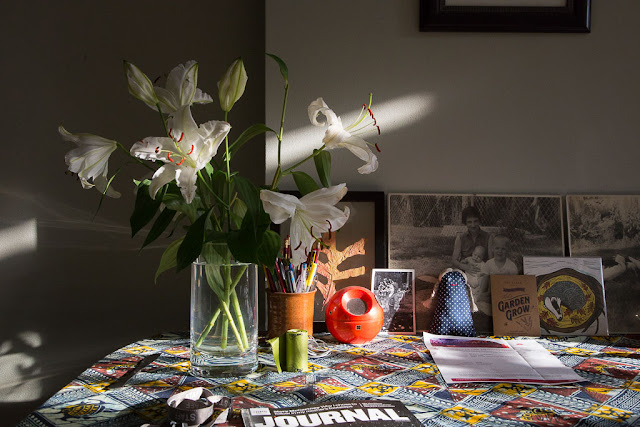 Yesterday morning the sunlight was falling so nicely across our hall table that I couldn't resist taking some pictures. Then I began thinking about the collection of stuff on the tabletop -- each of those items has a story behind it.

First of all, the lilies -- I found them while I was walking the dog. And no, they weren't growing in anyone's garden. They were lying abandoned on the public bench at the top of the street, amid unwrapped florist's paper. Who knows what happened? Maybe someone got flowers and didn't want them. Maybe a thief took them from the recipient's doorstep not knowing what they were, and left them behind after unwrapping them and discovering nothing of value. In any case, no one was around to claim them so I brought them home. We've had them more than a week and they're reaching the end of their time.

I made that pencil cup in pottery class in the late 1990's. Yes, I went through a pottery-making period. I was never very good at it, as all my poor friends who were burdened with my creations will attest.

The orange ball radio I've had since childhood. I wrote about it here.

Behind the radio and the pencil cup is a framed autumn leaf that my mom brought me from North Carolina way back in the late 1970s. She bought it at a shop, and it had been preserved somehow -- I think glycerin was involved? -- so that it retained its color and some flexibility. In the 40 years since, it has remained amazingly durable and only recently started to fade. Here's a scan, with the colors slightly enhanced to show how it looked when I first received it: 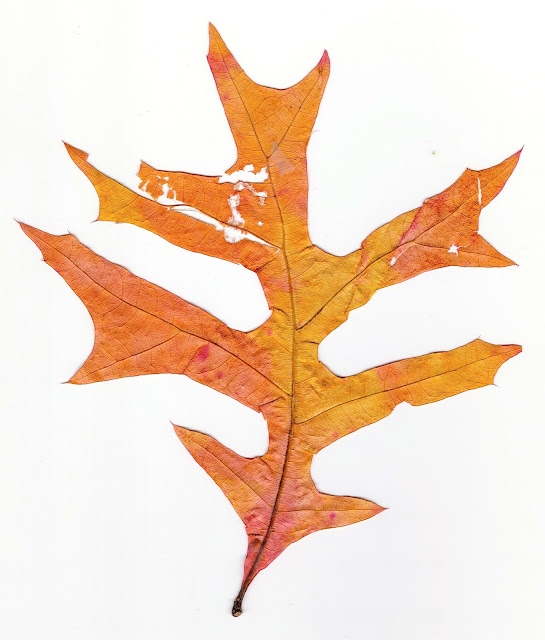 Pretty cool, huh? That leaf is older than Britney Spears, Justin Timberlake or Lady Gaga, to pick a few people at random.

The photos are of me, my brother and my mom, and were taken, developed and printed by my dad back in the 1970s. The packet of lavender seeds was included with a new pair of pants that Dave recently bought online. (Odd, but we'll plant them!) The little blue doll, which looks like a potato with pigtails and an embroidered face, we found on the street -- obviously someone's handmade creation. We tried to get Olga to play with it but she wasn't interested.

The badger card came from York. You've seen it before here. And finally, the tablecloth is a piece of wax cloth -- a sort of batik, at least in its original, authentic form -- that I bought in Ghana back in 1994.

That's probably more than you ever wanted to know about our hall tabletop! (And this is only half of it!)
Posted by Steve Reed at 6:38 AM

Only half of it? I cannot wait for the next exciting instalment of "Steve and Dave's Hall Table". It's all about the details.

I found the 3 posts about Leicester.....I immediately recognised the " gothic" photo as the old Midland Bank. I started work in 1963 at another Midland Bank in the city and every morning, as the junior , I had to go to the main branch with cheques for the " local clearing". We had to use a side door and go to a room upstairs, so I don't think I ever went into the main banking hall.
Re Richard 111.......he was found, as I expect you know, under a car park, next to what was a school. The exact place was under a space marked with an R...for reserved ! My cousin parked in that spot for about 2 years when she worked for the city police! My husband went to the adjacent school . I have a friend who is nuts about Richard and has been many times to Leicester in connection with the R3 Society. He never put a foot wrong according to her!!
I know where the Turkey Cafe is, but don't think I ever went in there. I left Leicester in 1974, when I got married and moved to Northumberland for 4 yrs, but our parents were there for much longer, so we still visited a lot.

PS. My Dad used to develop and print all his photos. I loved being in the shed ( dark room) with him watching them come to life in the chemicals. He later learnt how to do colour prints, and made many beautiful photos. He was a keen photographer, and in the war, he was posted in Egypt, with the RAF.....pay corp I think. not fighting/flying. He went to see the tomb of Tutenkamun while the boy king was still in the tomb, and stayed back to take a forbidden photo ! I believe that is the story anyway!

I think your hallway altar table is beautiful! And it is an altar table, in my opinion. The photo is lovely. And I think your pencil holder is a very nice piece of pottery.

I love your table, or altar table as Ms Moon calls it.

This photo tells much about your life. You've got a few blog posts from this one.

The framed autumn leaf would be the item I would steal if I was passing by your hall table.
What next?
A pantry shelf?
The top shelf in the frig?
The outdoor plant table?
Mrs Kravitz' back deck?
The possibilities are endless.
Alphie

That's a very cool photo with so many stories interwoven in it. I like that you have an autumn leaf that is so very old. What might have been raked up and long forgotten has a place at the table.

The light in your photo is perfect. I can see why you wanted to capture it. I enjoyed the stories about the items. I often look at something at my house and think about the story behind it. The 40-year-old leaf is amazing.

It's fascinating that you bring things along with you from so many different stages of life, and also bring in orphaned items from the street, and yet your home is airy and spacious--its a kind of sorcery, no?

Very kitschy. But a lovely photo with the soft light.

I love the stories! We have similar "altars" in our home. Maybe I'll take a picture of one & tell the stories behind the items. Fun!

That was a very enjoyable collection.

I enjoyed this! And I agree with 37p about the sorcery. I don't know how you do it.

Who knew there were so many stories on your hall table? I can't wait to hear the other half.