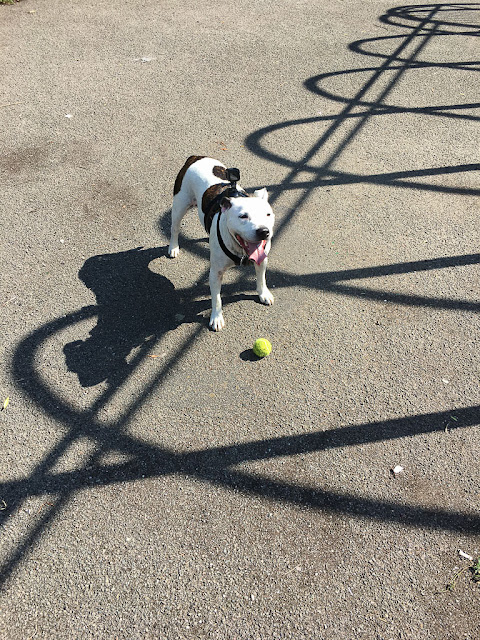 Another weekend day, another long walk with the dog. This time it was along the Grand Union Canal and through Wormwood Scrubs -- and I made another GoPro video! (It's been ten months since our last one, so we're long overdue.) Olga is wearing her GoPro harness and camera in the photo above. I wouldn't say she loves it, but she is very tolerant.

In the video below, you'll see me taking both that photo and this one: 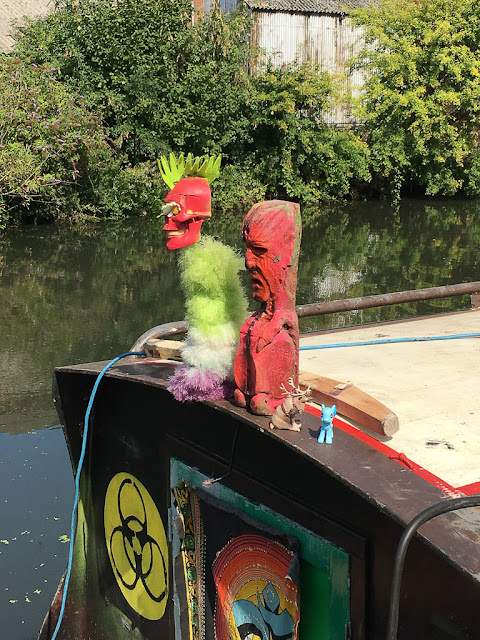 Those were some odd "hood ornaments" on a boat along the canal.

So without further ado, here's the action vid of our day!

I just want you to know that I shot an hour and a half of video, which I condensed into those six minutes and 42 seconds. You're welcome. My original edit -- let's call it the "director's cut" -- was almost twice as long and included a lot more footage at the beginning and end of our walk, as well as different music and some ambient audio. But even I, Olga lover that I am, recognize that it's too much to ask most blog readers to watch 12 minutes of my dog.

Among other things, you'll see Olga chase squirrels and chase her ball (in slo mo!), and at one point snag her harness on a tree and pull it off entirely. I had to climb into a densely wooded copse to retrieve it! There's also a glimpse of the Wormwood Scrubs prison, which is next to the park, at 4:50.
Posted by Steve Reed at 6:25 AM

You are giving her a charmed life...Nothing better for a dog.

I managed 5 minutes, but was feeling a bit " seasick"......can she walk slower and less wobbly next time please!! The canal looks very " green" in parts. Is it duckweed " Our local stream is covered in it at the moment.....I am surprised that a small child hasn't fallen in yet, thinking it is grass!
Your bag features quite a lot.......what is in it...or is that being nosy? Is it full of poo?
Happy Sunday......looks like being a lovely day. Off out with dogs very soon.

Looks like a beautiful day there for a nice walk. It is interesting seeing the world from Olga's perspective.

That was fun! I loved how she checked out the boats along the canal. She does get a good workout on your long walks.

love the 'hood ornaments' on the boat/barge.

Love seeing the walk from Olga's perspective. I made it to 4:50 to get a glimpse of the prison, but,yeah, got motion sickness!! I have a chihuahua who weights 6 lbs. Wish they made a Go Pro small enough for HER!

I love that first photo, full of "shadows and light", yellow ball right in the centre. What great composition. And, of course, Olga :)

I was thinking of Olga's camera recently and hoping for a video soon, so THANK YOU! lol She listens quite well, by the look of her reaction to your signals (and, I assume, voice command).

She really gets going, doesn't she? She really is the luckiest dog I think I've ever known. Not that I really know her but I feel like I do. She sort of slowed down by the end, didn't she?

No motion sickness here. I made it all the way through and enjoyed it. I was a little concerned for Olga toward the end when you had to cross the street but it looked like she had little or no fear. Thanks and thanks, Olga!

Olga's ears!! I could watch this all day. Love the song too, Priscilla Queen of the Desert, which Erik and I watched one million times. And could that be the leopard bag I sent so long ago? Loved your walk along the canal, thanks!Olga, is one lucky little girl!!!

I could watch that all day long! I love Olga's flapping ears and I just know she was grinning the whole time. I wish George could run off leash, but he won't come back. Ginger is pretty good off leash but every once in a while she'll see a squirrel or a cat and she's off like a shot after it. So no free runs for dogs around here!

I'm an Olga ear fan too - I just sit & grin through the whole video. The only thing missing was her getting wet this time - that made me laugh out loud last time, her shaking all the water off. Ha!

Hi Steve. I watched the whole video of course and loved every minute. It inspires me to do the same for Nell although I have a feeling she would be less tolerant. When we first got her, Lindsey's parents got her a 'costume' but she wasn't having any of it. Great blog!

E: Hopefully she thinks so!

Frances: Ha! No, the bag is not full of poo, though I have been known to carry bags full of poo for a considerable distance before finding a trash can. I was carrying a sweatshirt and Olga's Kong toy, among other things. And yes, the canal is paved with duckweed in certain sections!

John: But why?! You take great photos too!

Robin: Isn't it? I love how fast she moves.

Sharon: She's very curious about everything she passes. Except the tire swing, which she found scary!

Ellen: It's a "thing" to customize canal boats with quirky decorations.

Tara: Well, you made it MOST of the way through! LOL

Jenny-O: I'm glad you were hoping for a vid and I was able to provide!

Ms Moon: Yeah, she slowed down a lot toward the end. Plus she never wants to leave the park, so she always drags her paws. :)

Catalyst: She is completely heedless of cars, actually -- which is why she was on her leash at that point!

Linda Sue: YES! It IS the bag you sent me! I keep it folded up in my camera bag and I use it all the time! Isn't that an interesting version of that song?

Jennifer: Ha! I'm so glad you liked it. Maybe I should post the "director's cut" for all the dog people out there. :)

Bug: Yeah, her ears are hilarious. She normally gets very muddy at the Scrubs but it's been so dry lately!

Gavin: You should definitely get one for Nell! At least try it out. I've never put a costume on Olga but I think she would hate it -- especially if it included something on her head or face. The good thing about the camera is that it's basically just like her walking harness -- I'm not sure she feels much of a difference.

Hi Steve, a bit late to the party but have only just looked at your blog, coming via Yorkshire Pudding. It's the first go-pro video I've seen & I thought it was brilliant! Great choice of music to go with it as well; I've not heard that version before. It's great to see a dog's view of the copse, then the go-pro just rolling off like it needed a break from all the busyness. You weren't tempted to do something about that shopping trolley you passed toward the end?! Great photos on your blog.

Welcome, Pipistrello! Glad you liked the video. That shopping trolley is a bit of a mystery, because there's no grocery store anywhere around there as far as I know. I can't imagine where it came from!