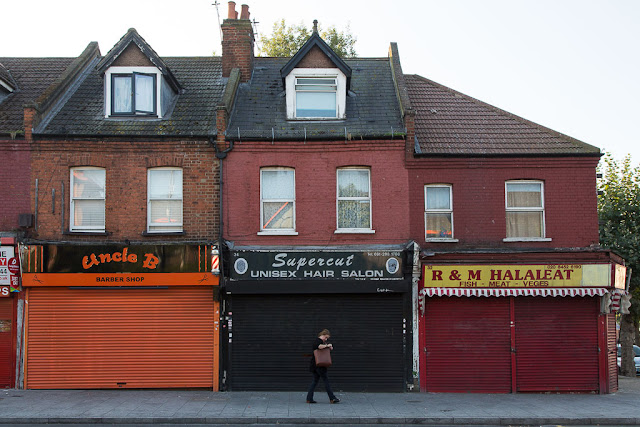 To follow up on yesterday's post, I found out why there were Barbie dolls in the science department. Apparently one of the teachers used to do physics experiments with his middle school students that involved throwing Barbies off the school roof wearing parachutes. This is according to another teacher, a woman, who said the practice has since stopped. It does seem a bit misogynist, doesn't it?

Well, there's certainly a lot of that going around these days.

I don't know the details about what's happening with the Kavanaugh nomination, because I am still choosing to protect my sanity by doing things other than reading the news. But I have skimmed the headlines -- because I can't stop absorbing all information -- and I'm glad the administration and Senate Republicans have decided to make room for an FBI investigation. These are serious issues, and Kavanaugh showed some worrying tendencies during the hearing.

Dave and I went last night to see a special invitation-only screening of "First Man," the biopic about Neil Armstrong and the first moon landing. (We got the invitation through some people at school.) It's an excellent movie, and harrowing in places. Whoever did the sound editing definitely deserves an Oscar -- you feel like you're inside those rattletrap spaceships, with all the noise and vibration and spinning and rolling. The movie does a wonderful job conveying how miraculous that moon landing was, considering our technological capabilities at the time. I mean, think about what televisions and cars were like in the late 1960s compared to now. And we sent men to the moon! It's incredible.

I once met Neil Armstrong, when I did a story for our college paper about an event focusing on the future of the space program. It was in October 1985, just a few months before the Challenger explosion changed everything, and my editors flew me to Tallahassee to cover the discussion. I came back with a rather lightweight story, and when my news editor read it, he said, "Well, that wasn't what I thought it would be." As in, "I flew you all the way to Tallahassee for that?!" Judge for yourself: 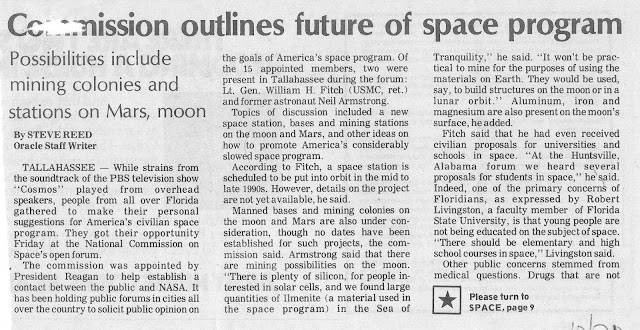 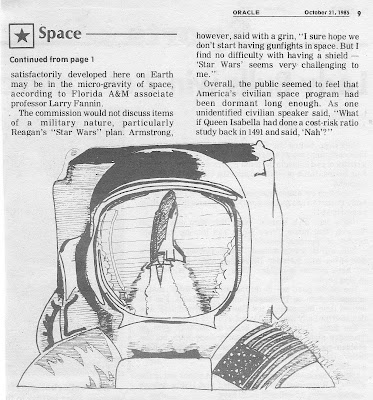 Maybe not my finest journalistic moment, but I don't see how I could have done any better. When you cover an event, it is what it is, you know? At least I got to meet Armstrong -- I even got his autograph, though I no longer have it.

Anyway, "First Man" is well worth it if you want a riveting movie!

(Top photo: Shopfronts in Cricklewood.)
Posted by Steve Reed at 7:03 AM

I wonder what kind of report your editor was after. Possibly more of a chatty human story about a man whose name is forever imprinted in American and indeed world history. It's amazing that you met him - so amazing that I want your autograph! By the way - Neil Armstrong had a marvellous first name.

Throwing Barbies off the roof wearing parachutes. An explanation which covers the look of terror on one Barbie face, the smashed limb and the totally headless Barbie doll in yesterday's photo...
Nothing wrong with your news article, though I did wonder who would be manning the bases and running the mining colonies??
Alphie

Well, I'm still waiting for my jet pack to use to get to work.
I sort of love the Barbies-with-parachutes idea.
And that article was excellent. I mean, you left out the part about Armstrong meeting gods and aliens but besides that, it was on point.
(I think that's what we'd like to think happens when we go into outer space.)

We have to be completely aware of the Cavanaugh situation so that it can be opposed . It's a rather sickening situation.

I thought the article was finely written. Mmmm... makes me wonder what's missing. If we ever meet, we should shake hands. I collect handshakes. You could give me Neil Armstrong (and the moon!), and I could give you Allen Ginsberg, all the old beat writers, and John Kennedy (and all the hands he ever shook!).

That movie sounds great. I will watch for it to come here. And, I like your article. You covered the event very well. I'm sure if something exciting or scandalous would have happened you would have mentioned it. (That's much more likely to happen today than back then.) Speaking of "Star Wars" I actually got to visit an air force base in Colorado that was developing the star wars technology back in the 80's. It's a long story how that happened but suffice it to say, it was a fascinating visit.
On the Kavanaugh situation, it's a total mess and it will have repercussions that will haunt us for a very long time. (I know, not a very positive viewpoint.)

After watching the hearing Thursday, I'm convinced that Kavanaugh does not have the temperament to sit on the Supreme Court, regardless of the truth of the allegations against him.

I agree with Mr Catalyst. Kavanaugh seemed rather unhinged and on the verge of blubbering like a baby. When he asked the impressive Senator Amy Klobuchar about her drinking habits, he was totally out of line.

I suppose misogynist if you consider that GI Joe was dressed in drag.
:)

I was amazed that the president ordered the FBI investigation (I understood he is the only one that could make that actual decision, maybe I'm wrong) but I wish he hadn't limited it to such a short period. Hopefully, though, some solid answers can be found, in that week. I was shocked by Kavanaugh's question to Senator Klobuchar also - talk about trying to deflect the line of questioning.

YP: I think he just wanted a meatier story, and thought it would be heavier on policy and details. But the forum turned out to be more information-gathering from the public than anything else. And what does the public know about space exploration? LOL

Alphie: A good question. Also a good question -- how would we smelt mined metals like aluminum on the moon, where there's no oxygen and hence no fire?

Ms Moon: Well, that's because I'm in the liberal media elite and I have to suppress all those alien stories on behalf of the government.

Red: Sickening is the word. I can't believe out of all the possible jurists in the land, Trump wants THIS guy.

Robin: Now THAT is a cool idea! A handshake chain! I would LOVE to be just two handshakes away from Ginsburg and Kennedy!

Sharon: It's missing some stuff, but I was a brand new reporter at that point. I think I'd been writing for the college paper only about two months!

Catalyst: Exactly. The allegations are serious enough to cause concern, but the way he conducted himself totally disqualifies him, in my eyes.

TJ: Ha! Yeah, and I think he was the only male parachutist.

Jenny-O: I was amazed too. I hope it will be serious and thorough and not just a smokescreen.