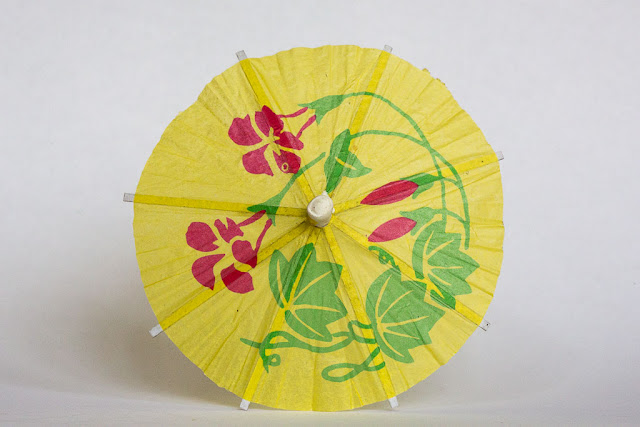 There's a restaurant and/or bar in West Hampstead that specializes in pizza and "Caribbean cocktails," according to the shopfront. It's not a combination that appeals to me -- it makes me think of pineapple and rum & Coke and college dorm rooms. But maybe that's the demographic they're going for.

Anyway, outside in the morning I often see these paper umbrellas scattered around. A cocktail umbrella is quite beautiful, when you look at it closely. I picked this one up because it was one of the few that hadn't been mangled, and indeed, it's so delicate, it's amazing to think it survived a night on the sidewalk. 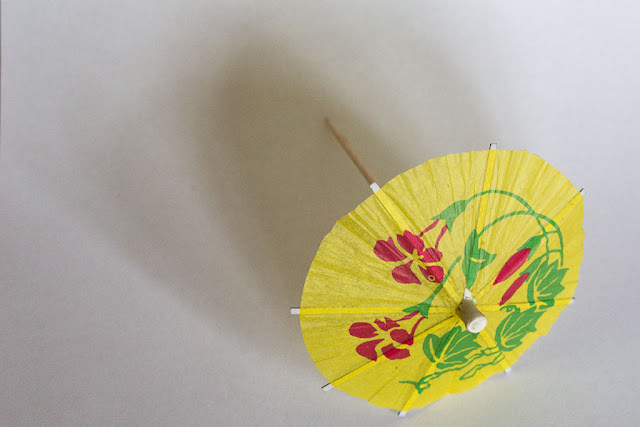 Lately I've been reading blogs on my downtime at work, but for some reason the school's Internet filters block some blogspot blogs, categorizing them as "mature." So I'm not able to get to all the links on my blogroll. It's very strange. What are you people writing about?!

I've also been reading the news, but I have to say, I almost can't stand it. And I'm a former journalist! I've probably written about this inner conflict before, but I've always believed it's essential to be informed in order to participate wisely in Democracy. Common sense, right? I was always proud of my role as a journalist. But so much of the news is so distressing these days -- yesterday, for example, I read an article about rhino horn smuggling complete with pictures of assassinated rhinos and I can't do a damn thing about it, and I really wonder why I need to torment myself. I've come to believe that unless I can take action it might be better to live in ignorance.

Wildlife stories I find especially upsetting, but politics is no better. I haven't been reading much about Kavanaugh. I already know I disagree with his outlook and the orange charlatan who nominated him and the slight Senate majority who will probably confirm him, or someone equally reprehensible. So why wallow in it?

Don't even get me started on the UK's national disaster, Brexit. Every Brexit story literally turns my stomach.

Dave says maybe I need a news break. And maybe I do. Or I need a news umbrella, made of something stronger than tissue paper, to protect me from all the news raining down.

We've been watching some good TV lately. I finally bought the Laura Dern HBO series "Enlightened" on Amazon. When we watched a few episodes several years ago I loved it, but I was never able to see the whole series (it only lasted two seasons before being prematurely canceled). So I caught up on all that and I'm sad there's no more. We finished the BBC series "Bodyguard," which was excellent, and we're almost done with "The Americans," and we're following "Ozark" and "This Is Us" and a quirky Netflix series called "The Good Place." And there's a new season of "Bojack Horseman," which might be my favorite thing on television!
Posted by Steve Reed at 6:43 AM

Caribbean cocktails and pizza! There's no accounting for taste. I read about the rhino horn smugglers too and I would like to ask those people who are the end beneficiaries of this slaughter how it adds quality to their lives.
Probably best that I can't ask that question; it might not go to well for them after that, in my make-believe world.
Alphie

You used the term "sidewalk" which meant I was unable to carry on reading this blogpost.

Loved your Netflix recommendations , had not heard of Bojack Horseman...

I'm with you- I think that the tiny cocktail umbrellas are absolutely beautiful. Just because they're so common doesn't make them any less so. But then again, miniature things often charm me.
If I'm blocked at your work place, it's no doubt due to my frequent use of swears. You know me.
I'm back to watching a new season of Call the Midwife on Netflix.

I'm glad you named some TV shows here because we definitely need some diversion from this news cycle. It's been a nightmare. About photos of slaughtered rhinos and elephants and other innocent creatures who have died for someone's perverted pleasures, I always hope for the truth of karma to be played out painfully in the spilled blood of ruthless hunters.

I remember some years back having that "mature content" problem with YOUR blog. Ha!

I agree that keeping up with the news is distressing & depressing. I want to just burrow down in my yarn & crochet the day away...

The news s depressing . It doesn't get any better. Sorry , but journalists and news organizations are doing a terrible job of accurate reporting.

I love the little umbrella. I remember back in my college days that I used to save the little umbrellas. Seems silly now but, I guess it was a sort of "grown-up" souvenir. I've been totally absorbed by the Kavanaugh mess. At first I didn't know who to believe. I gave him the benefit of the doubt but, the more I read, the more I'm sure the incident happened. I might be old now but, I remember how those white, privileged boys acted in high school and college. Regardless, he's a poor choice for Supreme Court Justice.
I just started watching "The Good Place" and I love it. I recently finished "Sinner" which was intense but good and I'm almost through "Doctor Foster" which is also intensely good. I actually did see the next season of "The Great British Baking Show" on Netflix. It was good but, I miss the old gang, especially Mary Berry. Did you happen to see the series "SAFE"? That one was really good!

I think Kavanaugh is doomed. Which brings up the question "who's next?" It's a stomach churning thing for sure. Pizza and Caribbean cocktails doesn't sound like a good match to me either. But I love the photos of your (found) umbrella.

Ha! I just finished writing about The Good Place and then I came here. It's quirky for sure, but I'm just really attracted to the characters. As for the Americans, the last season is by far the best, though I enjoyed the entire run. My son watches Bojack Horseman. It looks weird, but he loves it.

My grandmother used to give me little cocktail umbrellas to play with. Taking notes of the series you are watching. We are running low on ideas.

I love your pictures of that umbrella. There is a story somewhere about a squirrel getting wet in the rain because it lost its umbrella but never mind.
There was an anniversary of one or another major atrocity that happened in Germany in 1980 and we looked at each blankly. Although we lived here at the time we had no tv and rarely read the papers. I am sure we did hear about it then but without the constant media hype it was probably registered and that was it. Whereas now . . .

Alphie: That's one element of the rhino stories that always frustrates me. Even when they show end users -- as this one did -- they never ask that person, "What do you think about the possibility of rhinos going extinct because of your actions?" I really want to hear what consumers of rhino horn have to say about that. Are they in denial? Have they rationalized it somehow? Do they just not care?

YP: Of all my Americanisms, that one seems to rankle you the most!

E: Bojack is TERRIFIC! I laugh at every episode.

Ms Moon: Ironically, you are NOT one of the blocked blogs. It seems almost random who's blocked and who's not.

Robin: Those aren't all pleasant shows -- some are fairly violent -- but they ARE good. And yeah, I hope karma comes to call in one way or another.

Bug: Ha! I remember that too! And weirdly, it's now YOUR blog (among others) that's blocked.

Red: Some are more accurate than others. I think the Times has done a good job, but I just can't stand to read it because the content is so depressing!

Sharon: I have not seen "Safe," but we are watching "The Great British Bake-Off." I've gotten used to the new presenters, and I like Prue (the new Mary) a lot. I'm not at all surprised at the Kavanaugh allegations, but in his case they do seem more severe than what most guys got up to at college parties.

Catalyst: He might be, but as I said, I'm sure the next in line will be just as troubling.

37P: "The Good Place" gets better the more we watch it! Definitely give Bojack a try if you haven't. It's very weird and a little edgy but it's laugh-out-loud.

Colette: I'm not sure what we're going to start next, since we're pretty much either caught up or about to finish the ones we're on!

Sabine: Maybe I should have left the umbrella for that squirrel! Now I'm feeling guilty! :) Living without a TV or newspapers sounds kind of heavenly.

mature blogs...probably posted about sex or wrote fuck. I've had mine blocked at times for those reasons.