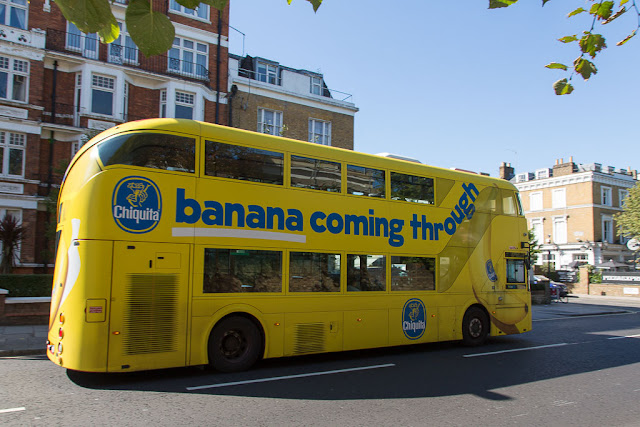 While walking to work this week, I crossed paths with a gigantic yellow bus likening itself to a Chiquita banana. You don't see that every day -- particularly in a city renowned for having bright red buses.

Well, it was eye-catching, I must admit. I wonder if the drivers on each shift wrangle among themselves over who's going to have to drive the banana?

Otherwise, it's been a quiet week, full of library minutiae like talking with my co-workers about future book displays and ordering supplies and new books and stuff like that.

I'm getting to a point in the year when I can tell who my problem kids are going to be -- the ones who never return anything, at least not on time. I've already had encounters with one high school student who has been chronically overdue for years and has lost several items. I suppose it was unrealistic to expect him to change over the summer -- but some kids do. It's surprising. Suddenly they hit a level of maturity where they get it, and we stop having trouble with them. Not this one, though. Not yet.

Dave and I don't have much on the agenda for this weekend, either. I hope to finish this Knausgaard book, so that I can start on "Educated" by Tara Westover, which I've heard is terrific. I do like the Knausgaard, though. I think I'll get the second one and keep going.

We had a moment of panic this week because we bought our plane tickets to go to Florida at Christmas, and we tried to make a reservation for Olga at her pet hotel -- and it's already booked up! So I was in a bit of a state wondering what we were going to do with her for those two weeks. I think we've found someone to care for her, though -- a woman we hired once in the past. Fingers crossed!
Posted by Steve Reed at 6:46 AM

About the zinnia - sport is an horticultural term relating to genetic mutations, as you had suggested. I only know of it in relation to camellias of the japonica variety which are well known for sporting different varieties on one bush. I don't see why it can't apply to zinnias.
Hauling that supermarket trolley up and over the train overpass would have to be seen to be believed...
As for the Carlton Hotel, don't hold your breath waiting for it to re-open and don't hold back on the curse words. We had a similiar situation here, also relating to a hotel which was demolished without permission. When it recently came before the court the magistrate was disappointed the laws didn't allow a prison sentence; at this one of the defendants smirked and was told to wipe the smirk off his face.
When they demolished the building the rubbish was dumped at an outer suburb where it was discovered to contain asbestos and this was reported to the authorities.
Low life cowboy developers.
Alphie

My youngest son left home to go to Uni as a horrid teenager, and came back 3 months later as a grown up !
Re Olga being looked after.....I think I have mentioned to you before about home from home boarding. There is one local to here ( Hertfordshire) which isn't far for you to drive to from N. London. It is. waggingtailsuk.co.uk. A friend has used it a few times and been happy with it. You get to meet the people in their home beforehand and can say if you don't think they are right for you or Olga and they find someone else. ( I think they can say if they don't like you either!!). Lots of rules.....can't have their own dog, no young kids, no off lead walks, etc etc. Hope that is helpful, maybe for another time if not this one.

Nice banana bus! But what if you were taking the bus to a funeral? That would be such an absurdly existential experience.
I'm so glad that Olga's care has probably been sorted out. What a relief!

That yellow bus would be a shock to see on the streets of London.

Interesting banana bus, and definitely makes me wonder why such a thing exists.

Advertising can be very creative as with a banana bus.

so that bus is a regular public transport bus? Chiquita must have paid a pretty penny for that advertising. I'm lucky to have my sister here who takes care of Minnie when we travel.

'Banana coming through'- hilarious! I looked for Educated in my libraries (I live/travel full-time in an RV so I have 4!)and am #366 on the waiting-list in the Houston Library, #111 in Buffalo,NY, #309 in Newberg/OR and #1 in Tangipahoa, LA!

So if it gets into a violent collision would it be a "mashed banana"?

Perhaps instead of a fine, that young man who is so without feeling for other people or books, for that matter, might be assigned to shelve or repair the books until he learns that free books from a library are a great gift and not to be treated lightly and to be returned promptly in order to be shared with others.

Is there any process for warnings/suspension of library privileges at your school? I suppose students need to have access in order to do projects, though.

That bus is kind of hilarious!

Alphie: Thanks for filling me in on the word sport! Someone suggested I save seeds from that zinnia, and I may do so, just to see if the mutations (or whatever) replicate themselves in the next generation. I think the Carlton will reopen, but whether it will bear any resemblance to the previous Carlton, or have any of its charm, remains to be seen.

Frances: Yes, I think you did mention that! And we may go that route if needed. This woman does have other dogs, but I don't think that should be a problem for Olga. In fact she's cared for Olga before and there weren't any issues.

YP: If you ask anyone in the world what an English bus looks like, what do you think they're going to describe?

Ms Moon: Ha! The very thought of riding that bus to a somber occasion is funny. I suppose it would put things into perspective, wouldn't it?

Sharon: It shocked me!

Robin: I guess it exists because people will talk about it, just like we're doing here. :)

Red: It can! Someone deserves an award for this campaign.

James and/or Brigitta: Excellent! Go Tangipahoa! You and I may be reading it at the same time. :)

Catalyst: Or even a banana split?!

Peace Thyme: Well, our library doesn't impose fines, and unfortunately, I don't have the power to make him do penance in a physical way. I do think I'm going to have a talk with him, though. I think he's just not aware that when he mistreats or loses library property, he's depriving other people.

Jenny-O: We can restrict their accounts so they can only check out one item at a time, and we can temporarily suspend their accounts if they're chronically late. That's been done in this case but so far the lesson hasn't sunk in. And yeah, if they come in for a specific schoolwork-related purpose or with a class, we pretty much have to let them use the resources, regardless of their borrowing history.

I saw "red" when I read your response to my earlier comment. People in the rest of England do not think "red" when asked to picture English buses. They think of their own local bus liveries. 53 million people live in England and only 8.1 million of them live in London.

YP: Undoubtedly you are correct -- people in the rest of England do not think of London's buses as representative of the country. My point is, people in the rest of the world DO. It's not right or fair, and you could argue that it's ignorant, but it's true. (I would argue that your fellow camp counselors were certainly ignorant confusing London and England in the broader sense. No one should be THAT dim by the time they're a teenager.)

I tell you what, though. I'll change "country" in my post to "city." How's that?

I just finished Educated by Tara Westover. It was absolutely compelling and yet I found I couldn't write, I loved it. It's not a story you love, but I was googling the author and her family for days afterward. I look forward to your thoughts on the book. Tara Westover is very brave, and an evocative writer. I'm still thinking about her story.